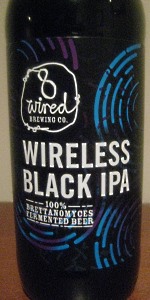 T- Becomes just a bit brighter than the what the smell was leading on to. The hops open up more with orange, grapefruit and general citrus zest smoothly blending into the chocolate and roast from the grains. Caramel, toffee, slight raisin, Brett tropical fruits, nuttiness, light roast coffee and cocoa nibs.

MF- Overall the body is around medium thickness but siding towards the lighter end of that spectrum. Smooth and silky moderate level of carbonation with a dry roasty bitter finish.

The Brett comes out a bit in the taste with a touch of tropical fruits and dryness but overall this one is about the interplay between the cocoa from the grains and the citrus hops.

This beer pours a solid dark abyss, devoid of colour except for the minor basal orange cola edges, with two skinny-ass fingers of puffy, rocky, and well bubbly brown head, which leaves some sketchy descending alien warship lace patterns around the glass as it quickly blows off.

The carbonation is quite active in its mostly frothy and palate-tingling overtures, the body a so-so medium weight, and not particularly smooth - I just had to test a gallon of milk that hit its expiry date yesterday, and poorly at that, so that's what I'm talking about here. It finishes off-dry, a bit of that base roasted maltiness kind of the heroic but ultimately doomed foot soldiers in this stupid war promoted by those fucked in the head commandants of funk.

Yeah, take a style that I already have massive grievances with, and toss in another bullshit single organism thing, and well, I'd like to say that I'm duly out, but hell, I paid enough for this abortion of an offering, so I might as well 'enjoy' it to the very last sip, amirite? No, I am certainly not.

Reviewed by Chico1985 from Massachusetts

A - 500ml to a mug. Pour is pretty much black with some red highlights showing through when held to the light. A small beige head forms and falls rather quickly, a thin ring and some lace bits left by the end.

S - Pretty bold for both blackness and hops. Some seriously danky mango, pine, orange hops take over more with time, but some strong cocoa, roast, coffee, dark fruit there as well. Seemingly not a lot of brett coming through, though maybe that is what attributing to the particularly potent dankiness.

M - Feels a bit thin and flat here, decent but light and kinda flimsy, could use more oomph in the body and carbonation department for sure. But nicely bold flavors and bitterness, has the power of an imperial as far as intensity goes. Hops rule the show for sure but a pretty impressive balance between them/dark malts/brett all things considered.

O - The mouthfeel is a noticeable flaw, but otherwise this is a pretty cool black IPA, definitely some intense New Zealand hops going on and a nice char-forward malt profile that doesn't overpower, packs a punch for 6.2%. The brett almost feels like an inessential aside, but it does blend surprisingly well and certainly doesn't make it messy/weird/etc.