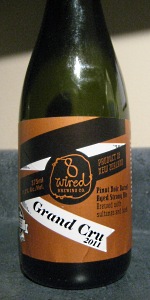 Notes: Grand Cru started out as The Sultan. When we made this beer last year I filled 8 old Pinot Noir barrels and more or less forgot about it. The native bugs in the barrels kept fermenting the beer, making it slightly sour. To further enhance the funky character, I blended it with 2 barrels of a Flanders Red kinda thing, that has also been fermenting funky for about 18 months.
View: More Beers
Recent ratings and reviews. | Log in to view more ratings + sorting options.
Rated: 3.75 by Hayley_86 from Netherlands

Appearance: A cloudy dark rusty red brown colour with a just over one finger tanned head that dissipates slowly to a thin replenishing layer while leaving nice curtain lacing.

Aroma: Red wine, grape and raisin with hints of vinegar and tart cherry.

Taste: Tart and sour cherry, vinegar, lots of dark fruit, grape, plum and raisins, vinous red wine with hints of chocolate and a light black coffee bitterness on the finish.

Overall: This was pretty good and definitely complex. However, lately I’ve tried quite a few wine barrel aged beers, and I’m thinking that perhaps it’s not my thing in that I don’t feel wine barrels add anything better to the base beer. It’s solid, but perhaps not “Grand Cru”.

3.95/5  rDev +1%
look: 4.25 | smell: 4.75 | taste: 3.5 | feel: 4 | overall: 3.75
Poured from a 375mL bottle into a Teku glass. 2011 vintage.
4.25/4.75/3.5/4/3.75
A surprising amount of carbonation/head. Good retention. Translucent wine-dark red.
It smells like red wine as well. Woody, bright, pleasantly acetic, and full of berries. Intoxicating, with an undercurrent of malty beeriness. Complex and compelling.
Slightly disappointing after such a wonderful nose. A bit flat flavorwise, it's musty and yeasty, with a distant sourness that isn't so much off as lukewarmly received. The tartness manifests as (cran?)berry on the aftertaste and is the most noticeable characteristic of the beer throughout the muted maintaste. Some sugars emerge from the murky, only to sink back into the swamp on the tongue. It's actually not too heavy, which is nice.
Mayhap this was tastier in the past. As it stands, it doesn't justify its staggering price tag.

Reviewed by bobhits from Kentucky

Really unique and interesting beer. Still needs age as it is still rather hot. Good stuff.

Reviewed by seand from California

Overall, not bad. I'd like to have had it warmer, but the tasting notes I had said to chill to reduce the possibility of an uncontrollable gusher. Still pretty good though.

Reviewed by Brenden from Ohio

4.22/5  rDev +7.9%
look: 3.75 | smell: 4.25 | taste: 4.25 | feel: 4.25 | overall: 4.25
This beer is a sort of orange-brown with some fiery brightness to it despite a certain thickness that makes it mostly opaque. The head is fairly substantial but a bit too fizzy to stay up for long, though a steady bubbling keeps up about half a finger some somewhat tighter yellow-tinted head at all times. Lace is left in heavy spotting with some legs to it.
It smells to me like an Oud Bruin, but definitely not in a strict way. It's got that earthy sort of sourness with the tartness to boot and the gently funky aspect. It's also got a lot of vinous character to it, and it seems to have been wood-aged. There's a bit of fruit mixed in it all as well, a bit of apple flesh on the tarter side along with dark fruits, both grape and fig in the essence.
The flavor is just as big and complex, and this is a delicious beer. All the tart, sour and funky notes I got in the nose are here along with an undercurrent of a sort of creamy sweetness. As such, it's a touch sweeter than the nose, with overripe pulpy plum and dark fruits coming out strongly and a light boozy warmth. It's all extremely well integrated and makes for excellent depth.
The body is medium, leaning on the lighter side, and it's got a certain softness to the carbonation that adds a nice, even crispness on the tongue that bites pretty well. It's still smooth, though, and surprisingly clean. A little dryness mingles in as the wood plays its role.

Reviewed by artoolemomo from Oregon

Nose- Starts off like a basic sour and then mellow very quickly. Some tart cherry, some tart apple. A little bit of Pinot Noir and raisins (I'm guessing that's from the sultanas which are yellow raisins, I believe). Even a little bit of a port/sherry character. Swirling makes the raisin notes medicinal. Overall, I would say it's enjoyable.

Taste- Very vinous- not exactly Pinot Noir as it reminds me of something a little lighter. Tart cherries and apple- this is very reflective of the nose. A little bit of yeast bitterness. Definite acetic acid but it's somewhat rounded. Nice dry finish causes the Pinot Noir to seem lighter. Raisins aren't as conspicuous as they are on the nose. Some funkiness- a little bit of straw, mushrooms, stinky cheese. Not exactly horse blanket but interesting. A bit of oak. Absolutely no alcohol. I really wish this beer had a lot more presence. I like the flavors that are there but they are a little bit too delicate for me. However, the integration and balance is remarkable. Definitely a solid beer but it leaves me wondering what it would taste like with less age. The raisins begin to show themselves more and more and give my palate something it can grasp. This beer is rather understated but its simplicity is beginning to grow on me. A little bit of smokiness and prunes as well. Not really that sour at all. A little bit of spice (mostly cinnamon) on the finish.

Mouthfeel- A little more than light bodied with faint wine texture. Nice zip of carbonation and the dry finish really cancel out the syrup and make this a refreshing beer.

Drinkability- Easy on the palate and the alcohol seems invisible. The one thing it's not easy on is your wallet. At 13 bucks for a 375 mL bottle, this will not be a repurchase.

Overall- Solid beer that is definitely capable of raising a wine snob's eyebrows. Or could convert a cider drink. Definitely worth a try no matter what you drink. Considerably different from many BSDAs but not really a deviation from such a loosely defined style.

Burnish orange in its hue, the ale pours with a hazy gold, peach, copper tinge that just says both brown and orange. Mild carbonation provides a zesty champagne-like fizz but very quickly collapses back into the beer with low retention and even less lacing. Its an ale that's got to be assessed as much for its wine like character as it does of beer.

Tangy aromas of green apples, both sour white grapes and red varieties, lemons, oranges and pineapples set the sweeter and sourish tone in scent. But then fuller notes of apricot, raisin, slim honey-floral character and sour cherries provide a sense of robustness to come along with the acidic notes and wood scents.

Though strong in taste, its sweet start is short lived and dry with grain, straw and hay. What follows is all fruit and vine. Firm red wine, tannin, pepper all frame the taste of cider, vinegar, salt water, weathered oak, limes, and earthy spice in the middle taste. Trailing with pleasant sourness, wood and earth, the flavors are decidedly winey as they dive into an acidic finish of fruit, spice and oddly- fruitcake.

Where the typical "Grand Cru" would celebrate big body, this sour version is medium-light because of its fully fermented character and palate stripping cleanliness. Thought its visual carbonation is light- its felt carbonation is zesty, champagne-like and prickly as it bounces off the tongue. Warm and acetic in finish, the ale ends with cleanliness and earth.

What's expected is greatness. What's delivered is that but with exhilarating unexpected-ness. With the fruit and wood aged wholesome goodness, the ale pushes the style into curious and uncharted taste. And it goes there with boldness and assured persona.

A murky brownish amber with enough clarity to see some bubbles moving sediment around in a thick looking liquid, thumbs width of beige foam sticks around as a thick film leaving just a few patches of lace, I left a little behind in the bottle and there's still shitload of yeast chunks settling at the bottom of my glass

S brown sugar, wet wood,big fruity vinous notes are strong, cherry and strawberry perhaps? lots of funk and sugar coated raisins round things out with some unburnt tobacco, a fair bit going on and its working well

T more woody wine barrel and slightly less fruity notes, still lots of raisins and brown sugar, funky for sure, it tastes solid but the nose had a little more going on

M fairly thick liquid, a little slick with just a hint of booze, stick on the lips, and just stop short of foam from the bubbles

O very interesting combination of styles, I'm loving the complexity on the nose and its something unique, looks a little sludgy but its a minor complaint

I could see this one developing for a very long time, like a lambic with all the fruity funk but the Quad aspects are hard to miss, interesting to say the least and worth looking for

This beer pours a cloudy, murky, dark orangish brown colour, with three fingers of puffy, thinly foamy beige head, which leaves a few streaks of remote island atoll lace around the glass as it quickly and evenly fades away.

It smells of rather sour cherry and raspberry, a corresponding acrid fruity woodiness, sweet bready caramel/toffee malt, some tame, though still quite noticeable earthy funk, swollen raisins, and a twinge of wet, leafy hops. The taste is moderately tart, vinous fruit - more cherry, a hint of black plum, even a little strawberry - a soft (compared to that of the aroma) grainy woodiness, some sidling barnyard funk, musty, somewhat complex caramel malt, one with the suggestion of dusty toffee and fleshy raisins, earthy, leafy hops, and a very subtle echo of warming alcohol.

The carbonation is quite understated, really just an idea here, rather than an application, the body a decent medium weight, which seems to oscillate depending on whether you're focusing on the tart, funky, woody fruit, or the underlying sweetness. It all winds up smooth, I suppose, and finishes on a drying trend, the barrel character seeming to now be pulling rank over the fading malt.

An interesting, and heady science experiment, this is - a year in wine barrels is a long time, and it seems to have produced one complex, if also a bit complicated, offering. The best part is the balance among the various thrown-together components - neither the wood, fruit, raisins, malt, nor alcohol (yes, let's not forget that enlarged ABV, conspicuous by its absence here) sticks its head up too far. Not a typical BSDA, for certain, but even good things like that should try to be grand once in a while, eh?

Reviewed by IanSpindler from Canada (AB)

T: Raisins, sour funk, and barrel coming though on the finish