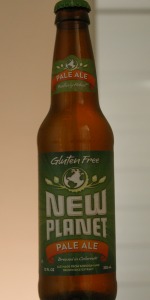 Gluten Free Pales and IPAs are a struggle. These are not easy brews to make. This is one of the best I have had as it would be an pretty good beer if you did not know it was gluten free. Overall I believe they did a very good job on this brew.

The smell is dry malt with a caramel touch. There's a bit of cardboard to the nose as well.

High carbonation level with not enough body to balance it. Despite this, this beer is too sweet, cloy even. There are overtones of apricot and caramel, but it isn't appealing--too dessert like. The hop is nearly nonexistent which is unfortunate since this beer needs balance. Think double bock without the body or rich malt presence. A clear miss.

If a 0 was possible, I would have given it such. This is easily one of the worst beers I have ever tasted. I had to actually pour it down the sink, and I think it worked better as a drain cleaner than a beer. Don't waste your money.

Awful. Tastes like plastic. Oh my god was this bad. Like pour it out bad. I can't even cook with this stuff. Avoid at all costs.

It looks nice, but not a solid GF option.

No thanks. Really strange. I need more words but I can't

Very carbonated. Nice GF substitute. But there are much better options if you are not gluten intolerant.

At least it looks nice...Taste is awful, among the worst beers I've tasted. Definitely the worst beer I've had considering the price-point. I don't know if I should be sad of the fact that I paid $8 for four of them, or if I should be happy that I only have three left.

Was hoping for better here, since is a gluten free beer. But just found it really undrinkable.

My god! How can a beer that looks, smells, and feels so decent have such an off-putting flavor? The flavor is nothing like a pale ale and instead presents an amped version of a bad mix of grapefruit and lime juice. Out of whack (taste-wise) and extremely forgettable unless you just want to look at it...

Gluten-free beer....totally pointless. But I picked up a bottle anyway.

Poured into a handy teku glass, a darker amber color, with a thin bubbly white head that held as a small ringlet. Nose was mostly subdued, hints of herbal hops and sugary sweetness. In the taste, up front, there was a light flavor of herbal hops, like dried leaves, with a big wave of candy-like sweetness coming in soon after, and lingering into the aftertaste. Tasted more like beer-flavored seltzer. Mouthfeel was thin, body was light-medium.

Gluten sensitivity has pretty much been proven a myth except for the small amount of people with that disease/disorder, so there's really only a small number of people who would actually need a gluten-free beer. Hopefully there's one out there somewhere that tastes good to help out those people that actually want to enjoy the craft beer scene.

I had purchased this a while back, thinking that perhaps an article on gluten-free beers might be in the offing. When I could not find a taker, the beers got shunted to the side. I had a colleague who has issues with gluten and she was always curious about beers that were gluten-free. I usually eschew them since I am not gluten-intolerant and prefer to leave them for people who are. In the interim, I am purging my massive backlog of bottles this summer and lo and behold! this one popped up. They will now be part of The Great Bottle Purge of the Summer of 2014.

From the bottle: "Ale made from sorghum and brown rice extract"; "new Palnet Beer chooses to support organizations that help our planet."

I am being driven nuts by these gluten-free beers! I realize that I am not their intended audience since I do not have Celiac, but they just make me feel like drinking a beer after I drink one. My easy-going pour still created a LOT of foam, so I sat back to let it do its thing. It burped, fizzled, off-gassed and generally acted like a baby, except that I have encountered better-behaved babies. It finally settled into a brief finger of rocky, tawny head that was determined to fizzle into wisps. Color was a tea-like deep amber/light copper to copper (SRM = &gt; 13, &lt; 17) with NE-quality clarity. Nose had a flowery, perfume-like sweetness. Mouthfeel was medium. There was no question that this beer contained sorghum once I got some in my mouth. Man, but it imparts a really sharp tartness that might appeal to some people, but for me, it was just not what I want to taste in a beer. I find it kind of difficult to describe, but it is like a diluted molasses with apple vinegar. Woof! Finish was dry, tart, not much unlike other gluten-free beers, but just not my bag.

This looks like a decent glass of beer with a slightly dark, coppery coloring and a decent head. That is where the positives end unfortunately. The taste is metallic, artificial and incredibly unlike how a beer should taste. It is also proceed like a premium beer which adds insult to injury. If I were gluten free I would gladly give up beer if this were my only choice. Fortunately there are others like Omission IPA that, while not fantastic, are palatable.