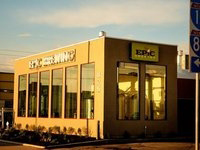 4.39/5  rDev +5.3%
vibe: 3.75 | quality: 4.25 | service: 4.5 | selection: 4.75
Epic Brewing in SLC is smaller than I presumed, at least based solely on how much of their higher ABV beer we get in Northeast Ohio. It's also a little shabbier inside than I'd imagined, with a small retail cooler before entering into the "carded" L-shaped bar that's surrounded by a few short top tables. That said, I had a fun, casual time as people flowed in and out for a quick taster or two and some to-go brews before they headed back out to fish or go home after work.

It didn't occur to me until we finished our first round--and I should have realized this considering the fact that we visited various other bars and brewpubs in Utah this past week--that since their beers almost all exceed the ABV limit for draft beer in Utah, they would have trouble offering anything on draft. Well, get this, they don't even bother with taps. They have to do literally everything straight out of bottles and cans, and you can only have two "shots" in front of you at a time according to this Mormon tyranny.

Even though we felt a little bad making them open a ton of shit at first, we ultimately tried several beers via tasters, and even had a couple of full pours before heading out. Since we showed up first thing Saturday morning after wrapping up our trip to Capitol Reef, everything had to be opened anew, but they capped them off with rubber seals and assured us they would work through all the bombers we opened by the end of the night as they became busier. I felt even better about it when my better half realized all these bottles were low fills anyway.

Production staff were working the bar and opening bottles for us, as well as taking tour groups through the brewery, all while simultaneously going in and out of actual production all morning. Aside from pretzels or hummus, there’s not really a serviceable food menu, even though I thought there was before we came, so we didn’t even bother. Even though I left on an "empty" stomach, I felt quite satisfied after our visit anyway. I wonder why? That liquid bread baby!

4.07/5  rDev -2.4%
vibe: 4 | quality: 4 | service: 4.25 | selection: 4
Tiny brewpub/ bottle on the main drag downtown. Entry into the bottle shop on the left across from the door. Tasting room is on the right with very small bar and a couple of tables on the floor. Prices were very affordable... friendly efficient service. I got 8 bottles to go, maybe next time I'll pony up to the bar.
Apr 30, 2021
Rated: 4 by atlbravsrno1 from New Hampshire

4.04/5  rDev -3.1%
vibe: 3.75 | quality: 4 | service: 4 | selection: 4.25
It was nice to finally visit the place where Epic beer comes from. Surprisingly, the space is very small. Tiny bar, tiny seating area, fridges full of take away stuff. As I'm sure everyone who goes to Utah must learn, there's a 4% ABV max law on all taps in the state. Epic, being a maker of big brews, gets around this by offering all bottle pours, from a fridge. Extra work for the bartender, but you do what you gotta do. Yet it begs to question...what, state of Utah, is the freaking difference? Anyway, there's not much more to say about the place. It's intimate, friendly, easily accessible, with a lot to chose from.
Jul 04, 2019

4.23/5  rDev +1.4%
vibe: 4.25 | quality: 4.25 | service: 4 | selection: 4.5 | food: 4
Enjoyed visit to Epic in SLC. Have been a fan for many years and finally able to stop in. Very small tasting/bar area. Seated about 6 or so. Essentially one relatively small room with bar area; coolers and wall space for retail. Friendly staff and fairly busy with beer tourists. While I was there I met/drank with a retired couple from Bay Area; doctor from Atlanta and some students from the University. Not bad for a @ Noon stop.
As educated... Utah law limits draft beer to 4% or less abv. So they only had a few to try. All good sessionable beers. However they had bottle pours ranging from tastes; short pours to full pints in about a dozen or more of their highly regarded big beers from Baptist/variants to other Imperial ales. Very good selection of their Saisons and IPAs as well. All served with any explanation desired. Had a good sandwich from a limited menu; not really a kitchen though.
All in all a small somewhat limited place... but really glad I went. Had a chance to try several very good beers (eg Quad Barrel BBB; Sage Saison); meet some beer travelers like me as well as some great people working there. Oh and coolers have just about all their beers in 750ml bottles to go. So easy to grab some very modestly priced great beers for the suitcase.

The tasting room is to the side, and was quite small. There is a small bar area, and maybe a few tables. They also sold memorabilia here. Due to Utah's alcohol laws, they can't serve beers over 4% from taps. If you know Epic's beers, I don't think they brew any that are less than 4%. So, they pour beers from bottles and cap them and put the bottles back in refrigerators until they are empty. Weird. Yes, but that's how it was at every place I visited in Salt Lake City.

Rated by Wasatch from Colorado

Reviewed by oo7monk from Minnesota

Reviewed by Rockjocknroll from California

4.5/5  rDev +7.9%
vibe: 4.5 | quality: 4.25 | service: 4.75 | selection: 4.75 | food: 4
What a great spot. They have to serve food to pour tastes (because of insane legislation perpetuated by the older Utah breweries) out of their own bottles, hence the 'tapless taproom'. The food is plenty tasty, served by the same person who pours your beer. Ben was very knowledgable about all aspects of the 27 beers (2 lagers and 25 ales!) they were pouring and made a mean sandwich. Bottles are for sale just feet away with really nice folks. Put all that together and you've got an overall unbeatable tasting experience, especially for Utah. Can't think of a better way to spend a Sunday afternoon.
Apr 03, 2016
Rated: 4.61 by Buannaich from Colorado

Rated by ashley_hanley from California

Reviewed by Dave_Treat from Virginia

Rated by Harvest06 from Oregon

Reviewed by MFMB from Idaho

Reviewed by TreeBear from Oregon

Rated by DoctorZombies from Florida

Reviewed by mklinger from North Carolina