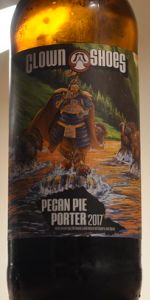 F: Roast he was a little bit of sweet Caramell some naughty and roasting molds nice Porter back bone but very little pecan pie

Many thanks to SawDog505 for this bottle.

A - Dark brown pour with a cream colored dense, bubbly lacing, little to no carbonation.

O - Not memorable but solid.

This coal black brew has a firm tan froth and a rich aroma full of pecan, molasses, oak, cherry and yeast. Goes ultra-smooth with equal notes of milk chocolate, dough, pecan, roasted nut, molasses and dark fruits. Finishes with subtle notes of wood and fusel alcohol. Medium in body, consistent in quality across the board, and quite easy to drink as this style goes.

A silky smooth treasure of an imperial porter of the likes you don't see around enough.

Always enjoyed checking in with this beer in its various permutations (which have so far included forms varying between 7 and 10%, some of which have been partially or fully aged in bourbon barrels, some which have real pecans added and some which use pecan extract), and this year's is no slouch at least on the outset. A 9% Wild Turkey bourbon barrel-aged porter with pecan and spices added. I'm ready for what it has to offer; even though I've never been fully impressed by this beer in its different forms, I've consistently liked trying it out and it has been a joy to savor at least once each Fall.

Pours a very dark brown beer with some molasses-like colors around the edges of the rim, along with some subtle ruby tones thereabouts as well. The main head is tenuous with medium buildup and quick disappearance. This has some nice legs, though, which form a khaki-colored ring of foam around the edges of this deep, charming brew. Surface presents with mild haze, and lace appears only spottily, with soapy suds slightly demarcating sipping points so far. Not a bad looker, but the head presentation leaves a little to be desired as it builds up with a soft wispiness instead of a full collar and fades out rather quickly after. Still, the color and slight lace (with aforementioned nice legs and glass-coating residue) are both rather nice. Overall, slightly above-average.

Nose is bourbon upfront with notes of pecan nuttiness, cocoa powder, caramel, Mascarpone frosting and hazelnut. There's a rather sizable ethanol hit in there as well, which is at this point expected from any Clown Shoes stout aged 100% in, well, barrels. Anything I've had from these guys with any kind of extended barreling time that hasn't been blended with un-barreled beer has been ridiculous and over-the-top, and this is quite intense as well. The pecan aspect here is as subtle as the last few years, in the sense that I probably would not immediately think "pecan" unless presented with the label and name of the beer. I mean, in the past this has had pictures of literal pecan pie on the label, so it was tough not to associate it with such a delicious dessert.

On the tongue, this is definitely a bourbon-barrel aged American stout or porter beer... that much is certain. It begins on the palate with sweet pecan, light notes of tart dark fruit (maybe black cherry?), bourbon sweetness, caramel and English toffee with even more nuttiness toward the mid-palate. The finish is very woody and tannic with some vanilla notes and barrel qualities. Very warming with some Fall spices coming to the fore as well... I almost taste nutmeg and cinnamon here, but it could just be the spicy alcohol and bourbon barrel deceiving my palate. Could also be the real thing, of course, considering the label does mention "spice" as an addition. Not sure, but this is quite a nice sipper and very warming.

Feel is rather full-bodied with moderate carbonation and a nice, chewy malt backbone. The bourbon and tannic qualities help solidify the palate, and there is a nice structure to the malt bill in combination with the adjunct nutty elements going on. The slight bit of roasty malt keeps this within the realm of "easily-suspended disbelief" regarding its consideration as a porter (instead of as a stout, I suppose, if anyone cares about such a distinction). Starting to think it's just a matter of alliteration for Clown Shoes, though, at this point. Regardless, this is quite a solid version of a beer that has had many different forms since around 2010. Though nothing will beat my original brush with it back in those days, it's almost like this beer has evolved with my taste and, indeed, with the times. In 2010, a bourbon barrel aged 9% pecan porter would have really shattered perceptions of beer. Right now, in the modern craft scene, however... it's just one among many moderately-crazy ideas being peddled every day. I know I'm about eleven weeks early for this, but "pecan pie" made me think of it: I'm thankful as hell for the state of modern beer in America. We have a hell of a thing going, and if this beer by Clown Shoes is any mind of microcosmic indication... it's going to be "going" for quite a while longer.

Poured into a 13 oz Tired Hands Teku glass not sure when it was bottled. Pours a very dark brown with a 2 plus finger dark tan head that leaves webby lace behind.

Mouthfeel is a tad thin for the style, enough carbonation, a little dry, and drinks easy enough.

Overall this one doesn't stand out, nothing bad but a tad boozy and thin. A let down for me.

A: Poured into a snifter to a black beer topped by a half finger of dense light tan head which fades quickly to a collar around the edge of the glass with minimal lacing.
S: Smells of pecans with some toasted malts, and caramel along with some oak.
T: Taste is sweet caramel and pecans with some oak and vanilla. Nice toasted malt and slight coffee as well. The roasted malts and dark chocolate come in at the back with a little more caramel and pecan. On the swallow this beer is roasty and chocolatey with some lingering pecans, oak and vanilla.
M: This beer is on the lighter side of medium in body with carbonation that is soft but adequate for the style. The beer has a drying finish which is expected and pleasant.
O: Overall this is a really good beer. It has some nice flavors and complexity which make it an interesting drink. The barrels are not too forward and the beer is well balanced as well. This one is definitely drinking well if you haven't opened it yet.

Poured from a bomber into a room temp snifter.

A: Pours a rich dark chocolate, almost opaque, with a few ruby highlights. A khaki head settles into a thin line, but maintains and laces nicely.

T: A lot of sweet caramel and brown sugar up front. Some chocolate graham cracker crust. A little roast on the back end, but the up front sweetness has staying power.

M: A little tickle of carbonation initially, but the porter has a glassy smoothness all the way through. The weight feels just a tad ponderous, but I personally like the heft of this porter.

O: Dessert beer! It's tasty and sweet. From a bomber, the sweetness will convince you to share this one. It's getting pretty rich as I drink it. But my palate is getting the pecan pie, so I'll call this one aptly named.

Undated bottle into pint glass. Pours an almost opaque ruby brown with almost no head despite an aggressive pour. Initial impression is smooth caramel and brown sugar - almost like molasses with booze in it. Slight burnt notes. Mouthfeel is quite thick for a porter, encroaching on stout territory. Carbonation is very light, emphasizing the smoothness. Alcohol is pretty well hidden. Finish is smooth and sweet. I generally likes stouts better than porters, but this one levels the playing field.