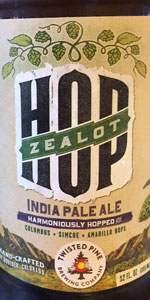 Reviewed by j_d_b from Maine

Feel is nice but not great. A little deflated and thicker carbonation that sharp microbubbles.

Taste has a little bitterness in the finish, which isn't an extremely pleasant type of bitterness, and a nice opening darker sticky hop flavor, without much citrus.

Better than I expected.

Reviewed by CNoj012 from New York

3.44/5  rDev -11.1%
look: 4 | smell: 3 | taste: 3.5 | feel: 3.75 | overall: 3.5
This beer pours a beautiful, bright hazy golden orange color with a small white head. Retention is next to none and there are a few small spots of lacing. Smell is hoppy but a bit muddled. Pine, earthiness and citrus with just a touch of bready malt. Also some sort of metallicness. Taste is the same, also very muddled. The only taste that stands out is the bitter pine on the finish. The citrus tries to come through, but is washed out by the bitterness almost immediately. Feel is light, smooth and a bit creamy. Overall this beer is OK, but certainly will not be a repeat purchase.
May 15, 2016
Rated: 3.63 by kkazemi from North Carolina

Reviewed by mackeyse from New York

Reviewed by Monkeyknife from Missouri

Aroma of tangerine, pineapple and pine.

Tasted of tangerine, baby aspirin, pineapple and a moderately bitter bite in the finish.

Lighter bodied and sticky with an average carbonation.

Reviewed by JLaw55 from Missouri

S: pine first, then earthy with a hint of tropical fruit;

T: floral and pine up front; floral builds and stays dominant through the moderately bitter finish;

T: metallic all the way through; a little citrus up front; bitterness at mid-palate with no accompanying flavor; moderate bitterness lingers; (3.25)

O: didn't mind the blast of bitterness, but there wasn't any flavor to go with it; (3.5)

3.75/5  rDev -3.1%
look: 3.75 | smell: 3.75 | taste: 3.75 | feel: 3.75 | overall: 3.75
i like this one pretty well, its a nice sidekick to hoppy boy, a little more easy drinking, although plenty bitter in the finish. i find it a little more relaxed on the grain front, and a little softer on the alcohol presence, although oddly this is actually stringer than that one. i also think its more juicy, as in the hops contribute a lot of mouthwatering citrus characters, that really arent there in the hoppy boy, which for me is woody and bitter, although i like that one better than most too. there is a nice texture here, not gritty, but sturdy and unrefined in a very good way, not so clean, which i like a lot. the bitterness is a little higher than maybe it needs to be in the finish, but the carbonation is awesome, and from the tap at the brewery, this is a pretty solid ipa all told. i know it (and twisted pine more generally) have faced some undue criticism, and i think this is a fair testament to them being beyond any quality issues with their beer, its fresh and well made, whether you love the recipe or not.
Apr 25, 2015
Rated: 4.55 by Randomblitz