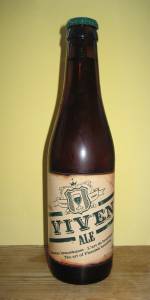 L- Quite a vivid deep amber/orange, cloudy, pours with 1Cm just off-white head. Ps. head holds well, even 15mins later.
S- Very light citrus.
T- Bright, actually it's quite tart. Notably hoppy/dry, so much so it makes be reflexively cough and then sneeze! Quite a reaction for my sip of beer today. My palate adjusts. It's a pale-ale with full-on prominent hopping. I don't get any contemporary (ie hipster) floral/fruit hopping, thank heavens, it seems more trad to me.
F- If you can tolerate this prominent a level of hopping then I'd imagine this a refreshing beer in summer. ...
O- ... bit I prefer more depth and balance, a flavour that develops on the palate and is less of a blunt weapon. Not for me this one.
Bought from BeersOfEurope/UK for home delivery £2.08/330ml bottle. BB: 20/05/2021.

Colour is copper/amber, with a white head. Bittersweet aroma. Lemon, orange and caramel notes give the beer a nice balance. Not an extraordinary beer, but nonetheless a good beer.

Big creamy head on orange golden ale, good carbonation.
1st smell of grassy hops, but after that also citrus. Malty sweet overall in the taste. At 5% this is a very drinkable beer. It's very well balanced between sweet and bitter. It's very soft mouthfeel, but with a nice bite, is a plus too.
Good beer from Belgium. It's very belgian overall, I would say. Maybe it's the yeast.
Very nice choice if you come across it.

Very un-Belgian in taste, those English Golding hops asserting themselves I suppose?

Poured a misty copper colour with a thin head covering.

Lacked oomph in both the aroma and taste: some yeast and fruit notes but not enough to excite my taste buds (it was drank after on-tap stronger beers though).

Mr Average in all aspects and a little disappointing to be honest, almost bland in fact.

The colour is deep gold (10 EBC), the liquid is clear. There is quite a lot of yeast in the bottle, but it stays there. The three finger head is yellowish and airy, it sinks slowly leaving some lacing.

The smell is quite light. Smooth sweet notes, some caramel and a touch of earth. Tobacco? Mild bitter notes in the background. The expected yeasty/spicy notes are mild.

The taste is first bitter and fresh, then semi-sweet malts and some phenolic yeast kicks in. The flavours are mild and very balanced. Light to medium body. The aftertaste brings hints of fresh cheese, some tart wheat-notes and growing alcohol. The finish got quite a lot of alcohol and some fresh herbs.

The carbonation is medium strong. The large bubbles are short-lived. The liquid is a bit dry.

I found this beer balanced and smooth, but also a bit boring.

Pours a cloudy amber/copper colour with a small but creamy head and limited lacing.

Fruity on the nose (orange and some tropics), malty biscuit and a bit of farmyard funk.

This is a spicy, hoppy ale. There is some fruit (ruby grapefruit) a bit of malt and a bit of farmyard yeast but the finish is underwhelming.

Another good beer from Viven. Less going on than the imperial IPA but much, much more drinkable (the IPA is heavy and -while very good flavours - one is enough). Reminds me of a Zinnebir. A nice drinkable pale/amber ale.

S: pineapple, orange, some clove and malts and a hint of hops

T: a lot of bitterness coming form hops and malts, still some orange; Not as well balanced as their imperial

O: not bad but i prefer their imperial

Taste: Much stronger flavour than you’d expect from the aroma. Good combination of malt and hops, although there’s something peculiar about the hoppy characteristics in what seems to be a fairly typical Belgian ale with a malty background. Some bitterness in the aftertaste.

Mouthfeel: Nothing peculiar, quite light.

Overall: I was pleasantly surprised by the stronger than expected taste, the lingering aftertaste makes this interesting as well. However, it’s really a pretty standard Belgian ale, and I’ve certainly had much better ones. This appears to be a fairly new brewery, only established in 1999 — I’ve not come across it before. They do a smoked porter which might be interesting, if I could find it somewhere… I found this bottle from the Finnish alcohol monopoly, Alko. I don’t think that it’s a part of their standard selection, but they had some sort of an Octoberfest campaign and I belive this beer was a part of that, no they’re already removing it from their selection.

T - Similar to the nose, yeast and orange are forward, with some zest and bread backing. Really nice but lacking some complexity.

Pours a clear, coppery amber with a nice and thick white head. Lacing is good, as is retention.

The aroma has some fruity notes of orange, and a woodsy, herbal character.

The flavor is boring. Bitter, with a slightly spicy character. Pretty malty for a Belgian pale ale, but there's not really a whole lot to this stuff. Reminds me of English Bitter, actually. Finishes very dry. The mouthfeel is smooth and well-carbonated.

Viven Ale from Brouwerij Van Viven
Beer rating: 80 out of 100 with 24 ratings