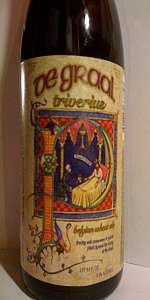 Reviewed by thepenguin from Massachusetts

S: Spicy and fruity, this beer’s aroma is more reminiscent of a saison than a witbier. Fruit aromas of apples and tart pears, some faint sweet malt and noble hops, with the wheat and coriander of a wit. The disparate smells come together very very nicely.

T: Semisweet and spicelike upfront, semisweet in the finish. Pronounced fruitiness. Stronger and more malty than a typical witbier, this beer is quite delicious and nonetheless refreshing. Actually somewhat reminiscent of a tripel, but with substantially more wheat character.

O: One of the best wits I've had to date. It's interesting to see some brewers pushing the strength boundary for the style, and these ones do it with grace. Try it if you get the chance.

A - Poured a nice light pale yellowish hue with a thin white head that fades to leave a very light blanket.

T - Taste is similar to the nose with very nice citrus orange notes, soft wheat. Cloves come out a bit in the taste.

M - Mouthfeel isn't too bad. A bit too much carbonation for my tastes.

3.9/5  rDev +1.3%
look: 4 | smell: 4 | taste: 4 | feel: 3.5 | overall: 3.75
A: Pours a rather hazy medium yellow in color with some light amounts of visible carbonation and golden yellow + apricot highlights. The beer has a finger tall off-white head that reduces to a very thin film covering the majority of the surface of the beer and a thin ring at the edges of the glass. Light to moderate amounts of lacing are observed.

S: Overall the aroma for this beer is pretty light with some notes of wheat with even lighter notes of citrus/orange/tangerine and some light fruit (apple and pear). Very light hints of spices.

T: Upfront there is a light amount of wheat with light flavors of citrus/orange/tangerine, and spices - most notable is coriander but there are also light hints of clove and allspice. Very light amounts of sweetness or bitterness.

M: Just shy of medium bodied with moderate to heavy amounts of carbonation.

O: This is enjoyable and I like the fact that the beer is not overly sweet or bitter. I really found this beer to be quite enjoyable and easy to drink. This one is pretty refreshing.

3.92/5  rDev +1.8%
look: 4 | smell: 3.75 | taste: 4 | feel: 3.75 | overall: 4
A: The beer is very hazy light pale yellow in color and has a light to moderate amount of visible carbonation. It poured with a thin white head that only died down a little and consistently left a thin head covering the surface.
S: Light to moderate aromas of citrus are present in the nose - orange and tangerine seem to stand out in particular.
T: Like the smell, the taste is quite citrusy but this isn't as prominent as the smell because it is balanced off by the underlying wheat. No spices are evident.
M: It feels a bit more than light-bodied on the palate and has a moderate amount of carbonation.
O: The smell and taste of this beer are very citrusy compared to other witbiers but it is still very drinkable and has some refreshing properties.

Reviewed by rfgetz from New Jersey

4.05/5  rDev +5.2%
look: 4 | smell: 4 | taste: 4 | feel: 4.5 | overall: 4
Pours an attractive and relatively clear golden straw color, big puffy head, some decent retention. Scent brings classic fresh dried grain, bread and peppery spice but backs it with a nice dose of coriander, fresh flowers and decent amount of citrus juice. Citrus is surprisingly forward in the taste, taking only a backseat to the classic tastes of the style. Nice medium bodied, bubbly but smooth with some heft. A very nice take on the style.
Oct 03, 2012

The colour is cool yellow (6 EBC), the liquid is clear. The three finger head is airy and white. It sinks slowly leaving no lacing.

The smell is quite mild. Tart wheat notes, some spices in the background. Fruity esters, phenolic notes of soap, allspice and cloves. Very low sweetness and almost no sweetness at all.

The taste is surprisingly sweet. Some sour wheat notes in the background, as well as some old spices. Orange peels, allspice and a touch of nutmeg. Light body. The aftertaste is not as sweet, but brings some alcohol, dry herbal-hoppy flavours. Banana peels and stale spices in the finish.

The carbonation is medium strong. Lots of mid-sized smooth bubbles. The liquid is smooth.

Well, this is an OK witbier. A little too sweet in the beginning and a not enough fresh spices, though.

Reviewed by BDIMike from Ohio

4.3/5  rDev +11.7%
look: 4.5 | smell: 4.5 | taste: 4.5 | feel: 3.5 | overall: 4
Pours an amazing looking wheat beer, and in my mind, the stereotypical perfect beer! A golden orange color with a nice hazy cloudiness to it. A good amount of carbonation creates a thick white head that sits on top of the beer throughout the entire beer.
Smell is awesome. A great clean wheat smell is dominated by spicy cloves, oranges, bananas, and a honey sweetness.
Taste lives up to the billing of the smell. A nice base of wheat and cracker. A lot of Belgian spice and coriander comes in. The orange, honey, and banana tastes come in at the end, along with a bit of Belgian sugary sweetness.
Mouthfeel is good. A medium thickness with a very sharp carbonation bite.
Drinkability is very good. A ton of tastes going on that balance very well, but all stand strong on their own. A great tasting and also refreshing beer. I could drink this beer from the beginning of the summer and never get sick of it. A great beer that I would love to get more of if I could get my hands on it.

Reviewed by Hex92 from Virginia

I think this is a good representative of the style, but I think the flavor is not quite as clean as Hoegarden or Allagash white. But it is still a very good beer.

Reviewed by WastingFreetime from Wisconsin

Appears as a very lightly hazed pale yellow color with a two finger head that dies back to a stable single finger head and stays that way, small amounts of lacing left behind.
Smells a bit like pomegranite, orange peel, and peaches over a crackery malt.
The flavor is a nice blend of pear / banana fruitiness and gentle tartness with a garnish level of powdery yeastiness.
Lighter body, clean finish, creamy texture and a nice carbonation. Very memorable texture and mouthfeel IMO.

Reviewed by BeerLover99 from Illinois

QUITE NICE, WORTH TRYING!

Reviewed by GONZALOYANNA from Spain

Reviewed by brokensail from California

A: The pour is a very clear pale golden color with a fluffy white head.

S: The nose is full of the usual spicy characteristics of clove and coriander along with sweet wheat, citrus, and some fruity esters.

T: The flavor is quite fruity with notes of banana, pear, and apple. The wheat, malt, and sugar provide plenty of sweetness which works well with the fruitiness.

M: The body is medium with a creamy carbonation and a somewhat dry finish.

D: A much nicer beer than I was expecting. I particularly enjoyed the fruitiness of it and it was quite different from any other witbier that I've had.

Reviewed by ccrida from Oregon

3.87/5  rDev +0.5%
look: 4 | smell: 4.5 | taste: 3.5 | feel: 3.5 | overall: 4
750ml bottle poured into my large Gulden Draak tulip, Triverius is a clear, spritzy gold with a huge, fluffy white head, pretty long lasting, leaving foamy lace. Save for some darker flecks of sediment on the latter pours, it's awfully clear for a wheat beer, let alone a wit. Pretty cool medieval label, a quote referencing the holy grail that perhaps the name of this brew is also associated with?

Smell is at first yeasty, with a dry mineral bite, then heavy citrus, orange and more so lemon. I have to say I really enjoyed it, almost saison like. Some nice floral notes as it warmed up from cellar temp. To bad the taste never really follows suit...

Taste is very clean malt and spicy, dry. Rather simple really, mostly just spices, though they're less citrus like the nose and more of just a generic, biting spiciness, I assume mostly coriander, with a slightly yeasty aftertaste. While the bottle itself makes no claims to a witbier, merely a Belgian wheat ale, there's surely no oats, and frankly, I'm not getting a lot of wheat either. No flaws, but no fireworks either, just an average, fairly boring Belgian blonde. I had to bump it up a 1/2 a point by the end for being pretty clean, and drinking much lighter then it's ABV.

Mouthfeel is dry and slick, medium light bodied, seems chalky, high in bicarbonate, although it might just be the spices.

Drinkability is ok, unassuming, but a decent thirst quencher that you could surely knock back a few with ease, until the spiciness caught up to you. But frankly, there's nothing about it that makes me want another, today or any other. That said, I picked up steam with rather suprising ease by the last glass, and was impressed by the buzz that such an unassuming little brew packed. Probably a good gateway beer for Belgian noobs.

Reviewed by Kraken from Maryland

Reviewed by paterlodie from Belgium

3.16/5  rDev -17.9%
look: 4 | smell: 3 | taste: 3 | feel: 4 | overall: 3
Good and lasting head and a orangegolden beercolor, nice clouwdy. Nose is very much aronge peals( with sour hint) and lots of koreander dominating the whole nose. Hard to find any maltyness or other flavour. This counts also for taste that is again a mixture of orange and koreander, maltyness though now noticeable as is a tiny bit of hop in aftertaste. Good carbonisation and freshness makes mouthfeel good but IMO far too much orange and koreander.
Jul 21, 2005
Triverius from Brouwerij De Graal
Beer rating: 87 out of 100 with 36 ratings