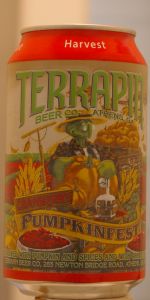 Notes: Cranberry Pumpkinfest is brewed with traditional pumpkin pie spices and contains real cranberry juice for just the right amount of tartness. We add pumpkin to the mash for yet another layer of flavor for a beer that is reminiscent of the upcoming season.

Love the orange amber color of this beer and the tan head. Powerful scent of pumpkin and cranberry. Complex flavor but the cranberry is a bit tart/cloying sweet. It's a thin beer with med/high carbonation. Not one of my favorite pumpkin ales but not bad.

Poured from a 12 OZ can into a pint glass at Taco Mac. The appearance is an amber color with a red tint and has a small white head. The aroma is cranberries, pumpkin spices and pumpkin. The taste is slightly sour with cranberries and pumpkin.

This is nice; the cranberry and pumpkin notes are both pleasant and the sweetness you get is very enjoyable. But it's odd; it kind of falls flat rather abruptly. You get what you came for, but it doesn't linger. It all just...disappears.

Aroma - Pretty pumpkin forward hints of cranberry there is also a good amount of allspice and nutmeg it is for sure a pumpkin beer with cranberry added.

Taste - Let me start by saying I do like pumpkin beers, the pumpkin flavor is pretty good in this one. I can also tell that the cranberry juice is there much more in the flavor than the aroma. It adds a tart sweetness that plays well with the pumpkin. The flavors are pretty simple, pumpkin and cranberry juice not much else.

Feel - Pretty light bodied seems like the carbonation is a little on the high side but pretty refreshing.

Overall - I was surprised and not expecting much from this beer pretty good flavors and just the right amount of tartness.

Pours a murky reddish brown color with an inch of off white head and moderate carbonation evident. Pumpkin, cinnamon, spices, gingerbread, breads malts, and cranberries. Taste is lightly tart and where the cranberry shines through. Little over carbonated.

Overall a solid beer and a nice change of pace from all the normal pumpkin beers.

L - Dark amber red, 1 finger of amber head and some lacing left on top of the brew and glass

F - Well carbonated and sizzles a bit on the tongue. Light body.

12oz can poured into a pint glass. The nose is pretty well balanced between pumpkin and cranberry, neither dominated the aroma. The taste is pumpkin spiced up front with a lingering tartness from the cranberries. The tartness quickly becomes overpowering for my tastebuds.

This is an interesting take on a pumpkin style that screams Thanksgiving but not a beer I'd want to drink in large quantities. In fact, the single can is more than enough for me.

Smell: Cranberry, pumpkin, and spice all converge upon the nose simultaneously, resulting in a complex and exciting scent.

Taste: The cranberry pretty much drowns out everything else. There is a little pumpkin and spice in the aftertaste but you have to search for it.

Overall: I had high hopes for this one, I could smell the cranberry and pumpkin while pouring it, but unfortunately the cranberry is over done and leaves the beer unbalanced.

A: Hazy medium brown in color with orange highlights when held to the light.

S: Traditional pumpkin pie spice aroma; clove, cinnamon, and nutmeg, but with a nice cranberry aroma with bread backing it up.

O: Overall a really crisp and refreshing take on the style with an interesting twist. I like the acidity, and think that it adds a nice bit of complexity to a style that can be overdone, and boring.

This is one of the better new pumpkin beers I have had this season. Great pumpkin spice flavor complemented and broken up by the tart cranberry undertones. Highly recommend.

I have been sidetracked from The CANQuest (tm) for a while as I attempt to winnow down the bottle backlog here at Chez Woody. However, I now find myself jonesing for the Crack & Glug of a CAN. 8=( I have a few CANs on-deck for today and I want to get them in while the getting is good.

From the CAN: "Spice [*] Tart [*] Harvest [*] Patch"; "Seasonal Sessions Limited Release"; "Cranberry Pumpkinfest is brewed with traditional pumpkin pie spices and contains real cranberry juice for just the right amount of tartness. We add pumpkin to the mash for yet another layer of flavor for a beer that is reminiscent of the upcoming season."; "'Carving out a NEW Fall Tradition'".

Following a loud Crack!, I could not help myself! I was CANmitted to an inverted Glug, just as I performed on Wednesday afternoon for Iron Hill Brewery (Lancaster) brewer, Pim Harmsen. The ex-Old Lady used to rant at me for trying to make "a big mess in [her] kitchen", but properly executed, it will bring forth a lot of foam and release the esters of the beer. In this case, it foamed right up to the lip of the glass & stopped, settling into just under three fingers of dense, foamy, rocky, tawny head with great retention. Color was Coppery-Brown (SRM = > 17, < 22) with NE-quality clarity & deep-amber highlights. This is going to sound like a cop-out, but the nose had a tart spiciness. I keep cautioning people that "tart" & "sour" are not interchangeable, and here is an example. The tartness of the cranberry juice gave me a light puckering of my lips, but not the outright duckface look of a sour. CANversely, there was a good deal of spice, especially cinnamon and allspice to cut the tartness. Mouthfeel was medium. The taste was really interesting - I could easily pick out both the cranberry juciness as well as the spiciness of (especially) the cinnamon. They commingled well, as opposed to layering atop one another, which is what I CANticipated as happening. Finish was dry, natch! I mean, figure, between adding spices to tartness, how could it be anything else? Now, the one caveat that I want to add here is that I do not think that it should be served cold. If you own or CAN fashion a double-boiler, I highly recCANmend mulling this beer on the stovetop, almost like a cider. I would also suggest perhaps adding more spices to taste as it warms. This beer seems more geared towards Thanksgiving than Hallowe'en and I would even serve it during Christmas holiday gatherings. Nicely done!

12oz can poured into a goblet

A- pours an amber color with a ruby-orange hue, small foamy white head reduces to a ring around the edge

T- light but noticeable cranberry tartness up front followed by spice flavors of cinnamon, nutmeg and allspice. The finish is slightly toasted with a linger of more pumpkin spice

M- medium body and carbonation leads to a foamy mouthfeel that continues into a crisp, semi-dry finish, good drinkability

O- somewhat surprisingly, the cranberry works well with the pumpkin spicing and makes for a highly drinkable beer

A thanks to the creator of the canquest, woodychandler, for this beer. Poured from a 12 oz. can. Has a beige/reddish color with a 1/2 inch head. Smell is of cranberries, light pumpkin. Taste is sour, dry, cranberries, up front, some spices, pumpkin in the background. Feels medium bodied in the mouth and overall I did not care for this beer, although I will admit that cranberries are one of my least favorite fruits.

12oz can. 2/9/17 code date. Appearance: Hazy brown with a touch of red, with a thick off white head and brilliant lacing. Aroma: Strong cranberry over the top of an underlying pumpkin pie spicing with strong cinnamon and nutmeg. Taste: Starts with strongly tart cranberry juice, some toasted maltiness and a moderately high bitterness on the swallow a light pumpkin pie spicing appears and intensifies with cinnamon and nutmeg. Mouthfeel: Light bodied with a moderate carbonation. Finish: Pumpkin pie character comes out of nowhere and shines in the finish, with some nutmeg/allspice/ginger combo. Overall: Quite an interesting take on the pumpkin ale. Cranberry adds a welcome tart contrast throughout the profile of the beer. Amazing how the taste profile completely changes in the swallow into a completely different beer with the pumpkin pie spicing. The tartness breaks up the spicing, which makes this more easy drinking than a traditional pumpkin ale

A: Pours a lightly hazy deep reddish golden orange in color with moderate amounts of active visible carbonation rising from the bottom of the glass and moderate dark ruby red highlights. The beer has a finger tall foamy dark tan head that slowly reduces to a large patch of mottled thin film covering the entire surface of the beer and a thin ring at the edges of the glass. Slightly heavier than moderate amounts of lacing are observed.

O: I enjoy the combination of tart cranberry, sweet pumpkin, and pumpkin pie spices - it reminds me of Thanksgiving dinner. Enjoyable and relatively easy to drink but not sure that I could have more than one of these at a session.

A: Dark copper with a reddish hue, thin off white head, good lacing

T: Tart cranberry upfront, pumpkin pie spices come in the middle of the taste, bitterness of the cranberry lingers after the taste

O: I really liked the original pumpkinfest and was hoping for an even better beer with the addition of the cranberry. Its good but It kind of takes something away in my opinion.

Cranberry Pumpkinfest from Terrapin Beer Company
Beer rating: 83 out of 100 with 67 ratings