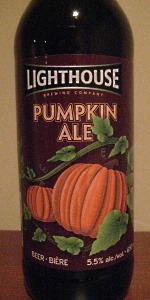 Notes:
View: Beers
Reviews: 3 | Ratings: 8 | Log in to view all ratings and sort

650ml bottle. A pumpkin-infused brew, with extra milk sugar, it would seem.

This beer pours a clear, bright medium copper amber hue, with one thick finger of puffy, bubbly, and loosely foamy beige head, which leaves some low-lying headland lace around the glass as it genially subsides.

It smells of sharp, zingy seasonal spices - metallic cinnamon, ginger, clove, and nutmeg - crackery caramel malt, and very subtle vegetal pumpkin flesh notes. The taste is more of the same - tinny, almost chemical-esque spices - the very same from the nose, in the interest of not repeating myself, a more sturdy bready caramel malt, hints of oily nuts, an even further lessened pumpkin essence, and leafy, weedy, and earthy hops.

The bubbles are pretty understated in their merely frivolous burbling, the body on the light side of medium weight, and plainly smooth, if that, a general pithiness arising as it warms. It finishes mostly dry, the ethereally pumpkin-tinged caramel malt wilting in the face of the lingering stoney spice, and unexpected alcohol twinges.

Sure, this has got a modicum of seasonal affectation and affliction, but it isn't of the sort to put a smile on a (grown-up) child's face, as it were. Underwhelmingly straight and dry (where went the lactose, one must wonder), and almost the furthest thing from the equivalent pie of note. Not a bad beer, really, but failing current and focused expectations gets you nowhere now, man.

Lighthouse Brewing's 'Pumpkin Ale' @5.5% served from a growler purchased for $10

S-a mild pumpkin pie smell (no spice's), more of a chemical smell , not even a cooked pumpkin smell

T-not pleasant , not overly spiced , seems to be still missing something (taste)

MF-mild carbonation , no body , on my palate it seems very metalic going down

Ov-I still can't recommend this beer , now that I've tasted it fresh from a growler , it's improved butt something is still wrong with this pumpkin ale , sorry Lighthouse

A: My bike panniers disturbed the bottle somewhat, so my pour foamed like a mother and dissipated entirely. Nonetheless, the beer displayed a nice, clear orange hue with moderate carb and a little lacing. Pretty much as expected.

S: Definitely more subdued than the Howe Sound offering, but it smelled fine enough with a big malt pretense and some hints of cinnamon, nutmeg, clove and (of course) pumpkin. Nice and hearty!

T: Much like the scent, but far less malty with a nice mulled finish. Again, subdued, but full and pumpkin-y regardless. Unlike other seasonal similar, this one seems "ordinary" enough to be offered on rotation--it's definitely autumnal, but leans ever-so-slightly towards a Winter Warmer. Mmm!

M: Sadly, a little underwhelming compared to the flavour profile. It starts off strong, with some moist, frothy bubbles and a bit of chew...but just goes after 2~3 s. Meh, still complements the palate nicely.

O: I'd give it a great rating, simply because of its repeatability: as stated previously, this isn't one of those "buy-once-a-year" offerings; no, I might actually grab another one, maybe even share it with friends. :)

Pumpkin Ale from Lighthouse Brewing Company
Beer rating: 3.42 out of 5 with 8 ratings