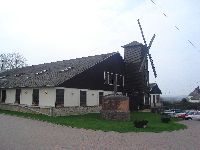 Beautiful countryside brewery with a spacious interior and patio. Large selection of seasonal beers on tap and to go bottles, along with glass wear for purchase. Visible integration of brewing facility with the dinning room; makes for a enjoyable visit.

During our annual trip to Belgium at Easter 2000, we stayed in Poperinge, but for some strange reason, fate chose to ensure some of our Brewery visits were deep in the south Ardennes that year. Before we visited Silenrieux Brewery on the 24th April, our first port of call was the Brasserie des Fagnes in Mariembourg.
The building is on the outskirts situated on a piece of land all of its own. It needs to be, for it is quite huge & a little bit strange. You cant miss this Brewery, it's right by the roadside & if the wooden windmill doesnt grab your attention the highly polished Copper set on a brick base amidst a perfect manicured lawn at the front of the building, most certainly will. A well presented single storey building that resembles a squashed Austrian Alpine House looks inviting enough but our main problem was that the Car Park was at the opposite side of the Brewery. The rather busy N5 that ran between us was also near the brow of a hill. Why did the drinker cross the road?, because he felt like a hedgehog, far from safe - but fun on the way back to the Coach after a skinful, oh how we laughed as we bounced off the Cars.
Once we entered, the first part of our Brewery tour comprised a look round some static exhibits from the long gone Degauquier Brewery from 1858. All sorts of old brewing equipment, incl. an old copper paraflow heat exchanger where the beer ran down the outside (!), coppers, storage tanks, old adverts, bottles, labels, even an old Brewery Dray parked inside the building. After this we went to the modern day brand new brewery, highly visible, and situated behind a wall of glass windows down one side of the building. Then we sat down amongst the many Tables here, and were served a wooden tray containing 6 sample beers, and a small snack, quite nifty and rather cool I have to say. Beer range comprised of 3 regular beers & 3 others from a range of seasonal beers (2 seasonals for each of the 4 seasons). All sold under the name Super des Fagnes. It even has its own Goblet style glass tumbler, with a thick solid base containing a solitary air bubble (an item that proved a popular purchase from the on-site shop).
Oh, and it also does a Childs Beer at 1.2% ABV  how cool is that? I wish they had this in England when I was growing up!!
Very impressive, well run, slick tourist-orientated establishment, that nonetheless, does some reputable beers. The Seasonals are usually the better of the bunch. Well worth a couple of hours on an afternoon.

Brasserie Des Fagnes in Mariembourg, Belgium
Brewery rating: 3.61 out of 5 with 77 ratings