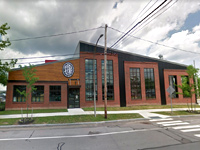 My favorite Rochester brewery visit so far. Big tap selection with a wide variety of styles. Beers are available in full pours or 5 oz tasters ($8 for a flight of any four) or to go. A couple of beers were lacking flavor but at least there were no off-flavors. Most of the beers were very good to excellent.

Vibe was lively on a Friday night but despite it being pretty full there are enough tables and a high ceiling so it was possible to have a conversation without shouting. I did see one unusual thing, two of the bartenders doing a "shot" of one of the beers. I think one of the customers at the bar bought it for them, but I'm not sure.

these guys are making some great beers, i have been a fan of their kind ipa for awhile now, so it was cool to make it in and see their spot. it was busy on a saturday morning, with the bar area totally packed, it too hot to sit outside, and most of the high top tables already occupied by folks that looked like they were in it for the long haul. they have a big stage in here, but no music happening, and a food truck setup outside that wasnt quite serving yet when we were in. i was impressed with their pretty large selection in here, some wild beer, some lagers, and some cool hoppy stuff which i thought was their best. the strong arm ipa and brute ipa were both great, while the brett michaels saison was totally underwhelming, and the lagers we had were also solid. a little bit all over the map in here, but their hits are home runs. the space wasnt all that relaxing when we were in, come cool art and all very new and nice, but it was super busy and loud, hard to even have a conversation, and it was relatively unremarkable as taproom, aside from the tasty beer. i could see this being better when its cooler out and the crowd is spread out a bit, almost more visually attractive from the outside than the inside, but everyone was nice and the beer tastes great. a staple in the rochester scene.

Three Heads is a brewery I can get on the shelves here at home but for some reason I just never really buy much of their stuff. The fact that it was on my way to visiting relatives made me want to stop in and have a flight or two so I can get a clearer idea of what kind of stuff they're currently doing. Several of the beers were pretty typical, true to style beers with nothing too unique about them. They did have one IPA (Strong Arm) on that was surprisingly good in my opinion which was great. The service was awesome here, just really good people and very welcoming. Overall I would probably stop back at Three Heads in the future when I'm back in the area.

What a nice place! They have about 10 or more beer on tap. When I first went I really enjoyed the beer and had great vibes. The second time I went their beer was okay and not a ton of different styles just mainly hop forward beers. Overall it’s a really nice place and I always have fun when I go there. Their beer is getting better and more diverse as time goes by. Sometime it’s a hit or miss with their beer though. Very friendly and knowledgeable staff.