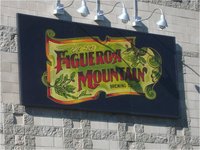 I can't stop in any town in America without paying a visit to a local brewery, and of those in Santa Barbara, this is the one I was most interested in checking out.

When I arrived with the family, the place was packed and a band was rocking out, making for a very loud establishment. No biggie, but surprising considering it was the afternoon.

As I usually do, I start with a flight for myself and find the sweetest beer available for my wife. My wife wasn't crazy about the wheat beer I chose for her, but I found plenty to like with the flight. Based on what I recall and a little help from the Untappd app, here's my impression of the beers I tried:

Lizard's Mouth- A Double IPA. I enjoyed this and found it very easy to put back. It was well-balanced and, surprisingly, wasn't the typical West Coast Hop Bomb. It was still very approachable. 4/5

Monkey's with Typewriters Rye- As the name suggests, this is a rye, and a decent one. My recollection is that I wasn't getting the rye spice that I wanted and that the hops were pretty subdued as well. Still, it was good enough. I gave it 3.5/5

Stearn's Irish Dry Stout- This isn't a style I don't see too much, but I did enjoy it. I recall a strong dark malt presence and hints of coffee with almost no sweetness. 4/5

Big Cone Black Ale- This was good and it required a second, full, pour. A moderately hoppy beer with dark malts that provided some hints of chocolate and toffee. 4/5

Davy Brown Ale- This was a run-of-the-mill brown ale. I enjoyed it, but didn't find anything unique about it. 3.5/5

Also, while up north in the town of Cambria, I had a pour of Fig Mountain's 3rd Anniversary Stout. The beer was very robust and complex in its flavors, with lots of oakiness, chocolate, vanilla, toffee and coffee notes (it's a stout and I believe it's aged in bourbon barrels, although I didn't detect a lot of bourbon notes, but I'd just had a Bourbon County before trying this). The beer was tasty and I'd certainly have enjoyed more, but when I was at the brewery they only had it in bottles and it was selling for $23. Whoa! Fig Mountain, I like your stuff, but there are a number of barrel-aged imperial stouts I like much more and some as cheap as $9 a bottle, so I couldn't justify this price. Anyway, the beer has sold well, so the locals are happy.

Finally, the service was friendly enough, so no complaints there. I don't recall seeing food, so beware coming hungry.