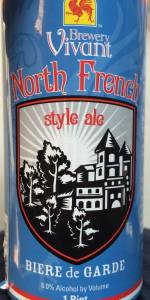 M: Light body, loads of soda like carbonation. Relatively dry with a slight leather coating left on the tongue.

O: Had very few in this style, but really loving the uniqueness of this. Feels to me like it’s the real deal, and much better than the French Chi’ti I’ve had as far as having more depth of flavor. Got in Saginaw MI, May 2014, drank in Kunming, China, April 15th, 2015. Hard to believe I’ve been ‘Garde’ing this one for almost a year!

Haven't had a new Vivant beer in a long time, so let's this shit, eh? It pours a clear russet-amber topped by a half-finger of light khaki foam. The nose comprises dried maple syrup, light cashew, flowers, and a vein of vague sweetness I can't quite pin down. The taste immediately leads with more of the same, followed very quickly by a surprising wave of tart-ish green apple and stone fruits, which eventually fades into a mild melange of bready malts, sweet flowers, and light maple syrup. It's odd, but not entirely bad. The body is a light-leaning medium, with a light moderate carbonation and a fluid feel. Overall, this beer continues to confound me. While I find the fruity character off-putting, it also sorta/kinda works with its circumstances. I would say my impressions were generally positive, but I'm still not sure whether or not I'll ever have another. We'll see, I guess...

A - Pours a deep amber with a two-finger foamy white head. The head dissapates quickly leaving no lacing.

O - This is a very nice Biere de Garde. Very crisp and refreshing. Perfect for summer.

$ 3.29/16 oz can at Lager Mill
Can at 45 degrees into snifter
Aroma of cider
Head fizzy, off white, instantly gone
No lacing
Body medium amber, clear
Flavor of apples with hint of sourness; no hops, no alcohol, no diacetyl; flavor ends quickly with a hint of lingering sweetness
Palate medium, watery, soft carbonation

This is not the best offering from Brewery Vivant, but is still a decent beer. I was paying between $11 -$12 a four pack in the grocery stores so the price at the bottle shop was not out of line. The lack of head and lacing is a negative characteristic for me, but in the end, the flavor is what matters and this was OK.

Pours burnt amber in color with a thin fizzy off white head that dissipates rather quickly.

First thing to hit the nose is a cider like aroma that has fruit notes of green apples and tart red cherries. Some faint toasted cracker like malt follows along with more fruit and cider notes.

Taste follows the nose with a light cider like apple flavor forward and followed by a very light tart cherry presence. More pronounced notes of toasted cracker like malt finishes and help balance it out.

Mouthfeel is great. Light crisp refreshing. Stickiness from the tart is balanced nicely with mild carbonation.

Appearance: a reddish bronze color. fairly strong clarity. a small amount of a white head that fades and leaves just a little bit of a lacing.

Smell: a slightly muddled aroma but sweet caramel and some tart fruits. some earthiness.

Taste: opens with a sweet toasty to caramel. some earth and a slight tart cherry flavor.

Mouthfeel: fairly light, some tartness and a good amount of dryness.

Overall: very impressed with this one. I only bought one but I may have to go get more. a great version of the style and a worth while beer. a great start to all of vivants new beers this year.

Pours into a chalice a clear auburn color with a thinner pretty quick to fade white head.Aromas of deep caramel/vanilla,light lactic sourness,spiced pears, and a bit of roasted nuts.roasted pears and brown sugar notes upfront on the palate along caramel and mild sweet bread,mild toast is detected in the finish along with just a tinge of lactic bite.The complexity of the flavors makes this beer,alot of good stuff going on.

I picked up a can of Brewery Vivant's North French Style Ale a few days ago for 13.59 for a four pack at Cork N Ale. I've never tried this beer before, but I'm always willing to try a new beer from Brewery Vivant and this one has me very interested, so lets see how it goes. No visible canning date, but think it's pretty fresh. Poured from a tall 16oz can into a Belgian style tulip.

A- The can looks pretty good, it's got a nice blue background and it has what looks like to be a home in the north french country side, I think it's a pretty eye catching beer. It poured a slightly orange like amber color that took on more of a bright amber and crimson like color with a fingers worth of off white head that quickly died down to a thin ring which eventually faded away and it left hardly any spotty lacing behind. This was a nice looking beer, I liked the color, but I wish it had a little more head and lacing.

S- The aroma starts off with a higher amount of medium sweetness followed by the some nice tart and fruity aromas, the tartness is right about at medium and the fruity aspect smells like a mixture of raspberry, red grapes with some other berry aromas lingering in the background. Up next comes the malts which show up a good deal and they impart a caramel malt, biscuit malt, bread crust, and toasted malt like aromas with a pretty noticeable nutty aroma towards the end. This beer had a very nice aroma, the combination of tart, fruity and malty aromas made for very nice and unique aroma.

T- The taste seems to be pretty similar to the aroma and it starts off with a slightly higher amount of medium sweetness followed by the tart and fruity aspects still being the first to show up, the tartness it toned down a little and it's on the higher side of being light and the fruit aspect is slightly lighten than it was in the aroma and this time it imparts some raspberry and berry like aspects. Up next comes the malts which impart those same malty aspects that they did in the aroma and there is still a nutty aspect that shows up towards the end. On the finish there's light amount of medium tartness followed by some bready, toasted malt, berry, and nutty flavors in the aftertaste. This was a very nice tasting beer, I really enjoyed the unique combination of toasted malts, nutty flavors and tart fruity flavors.

M- Very smooth, clean, crisp, a little refreshing, on the lighter side of being medium bodied with a medium amount of carbonation. This beer had a very good mouthfeel that was pretty much perfect for this beer.

Overall I thought this was a very nice beer and I thought it was a very nice example of a Biere de Garde, I haven't had many of the style, since there just aren't a lot of them out there, so I looked up what this style was all about and it seems to be pretty true to style especially with that toasted malt aspect that I don't think I have picked up any other Biere de Garde's I have had. This beer had very good drinkability, it was pretty smooth, clean, crisp, a little refreshing, not filling and the taste did a great job at holding my attention, I would be more than happy to drink a few of these on a nice summer or spring day and with that toasted malt aspect it might be even better in the fall. What I liked the most about this beer was the how well the different flavors worked together, I didn't expect the toasted malt flavors, but they turned out to be one of the highlights of this beer. What I liked the least about this beer is that it isn't more widely available and I think it could work out well in the year round lineup. I would for sure buy this beer again, I bought the last four pack i saw on the shelf, but if i saw any more i wouldn't hesitate to buy it and I would love to see how it changes over time. I would recommend this beer to everyone, I think everyone should try this beer at least once. All in all I was a little impressed with this beer, I already expected good things since it's a Brewery Vivant beer, but this exceeded my expectations and made for one unique and tasty bee that I very much enjoyed. This is now my favorite Biere de Garde and it's up there as one of the better Vivant beers I have had. Great job guys, I continue to be amazed by these unique and very memorable beers, keep up the awesome work.

North French Style Ale from Brewery Vivant
Beer rating: 88 out of 100 with 57 ratings