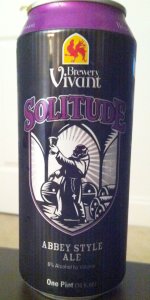 A - This beer pours copper in color with burnt orange highlights. It was topped with several inches of beige head with no lacing.

S - The smell is spicy and malty. I get some hints of plum, raisin, and cherry.

T - The taste is sweet and spicy. I get a molasses taste. Then the Belgian spices kick in with a lackadaisical effort. There is some biscuit, as well.

O - It is a decent beer. I just can't get excited about it. It is a little boring. Now the barrel aged versions are great.

Reviewed by PincheNorteno from Michigan

Appearance- pours a reddish mahogany brown, permeable to light, half inch head fades shortly after pour. Retains a ring of tight bubbles around the edge of the glass.

Smell- reminiscent of a sour, but milder. Malt and fruit esters come through. Think autumn.

Taste- recent batch has more pronounced tartness that subdues the bitterness and sweetness. Raisin, crisp pear/apple, grass, and some leather. Lighter flavors hit your nose too.

Mouthfeel- lighter than ommagang's dubbel, Solitude's carbonation makes it very approachable. Solitude is not syrupy or viscous. There's a cool vaporous quality to Solitude that engages your nose, there are some subtleties that come through this way.

Overall- I had given up on this Vivant brew, until I tried stuff from Unibroue, Jolly Pumpkin, New Belgium Lips of Faith series, and Ommegang. The perspective I gained leads me to believe that Vivant's Solitude can compete with other beers of its class.

Reviewed by MichaelNickerson from Michigan

Smell - extremely musty with some qualities of raisins at the end

Taste - thick, sweet beginning followed by a fruity and tart finish. Strong notes of raisins dominate the entire beer with almost a hint of broccoli

Mouthfeel - thick and silky finish, but doesn't convince another sip

T - Sweet up front with dark caramel, toffee, brown sugar and molasses. A decent alcohol presence cuts through the sweetness a little bit.

Reviewed by MadScientist from New York

T: Moderate malt, moderately-high hops bitterness and light fruitiness dominate the flavor. A moderately-low citrus and spicy hops flavor. There is some pear and raisins along with a low coriander-like sourness. The balance is on the bitterness. A light spiciness blends with the bitterness in the aftertaste following a dry finish. The spice becomes more clove-like as it warms.

M: This beer has a medium-light body with moderately-high carbonation and a slight creaminess.

O: Sort of a Belgian styled American Amber that comes together very well and goes down pretty easy. I could enjoy a few of these in a sitting.

Reviewed by andrewjraab from Michigan

T- A nice malty flavor to start, but too much of a bitter element to finish.

O - This would be much smoother and enjoyable if it had less of the bitters. It will be interesting to see if this relatively new brewery tunes up the recipe or not. I would try this again.

Reviewed by SpdKilz from Illinois

Appearance – Pours from a can into a tulip. Held up to the light there is a hazelnut brown color. About two fingers of head is achieved with a slow pour that dissipate quickly but leaves nice lacing.

Taste – Quite a bit of roasted malt which is almost immediately encapsulated by banana and clove. Very little hop profile but tons of yeast. Quite sweet.

Overall – Too much Belgian yeast. Relatively quaffable, but as stated a bit too prominent on the yeast.

Reviewed by ribby from Michigan

Reviewed by jale from Michigan

A: Pours a dark mahogany with two fingers of head.

T: Lots of malt up front. A little caramel and maybe some pear. Almost no hop flavor.

D: Would drink another