Tart Side Of The Moon
Brewery Vivant 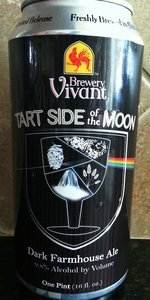 Poured from howler to tulip. Dark chocolate in color, with a finger of foam that's here and gone. Aroma of roast, baker's cocoa, dark fruit, and a little vinegar. Flavors of roast, bittersweet cocoa, dark fruits: figs, cherries, prune. Some tartness, not sour.

Chocolate covered cherries on the nose, topped off with vinegar, molasses, and licorice. Some toffee, banana, brown sugar, and toast as well.

Flavor follows, with a surprising amount of the nose represented. Tons of char, but also thick cords of vanilla and banana lacing through chocolate, coffee, and cherries. Plenty of toffee and caramel. It really comes across as a traditional English stout, with a bit of fruit and tartness.

Surprisingly thick on the palate; quite smooth.

wasn't sure what to expect from a 'tart imperial stout' (that's what my can says...others appear as 'Dark Farmhouse Ale'), but impressed. Doesn't strike me as 'imperial' but there is a definite tartness (although mild). Chocolate and cherry notes for sure, tastes and feels more complex than aroma. Does not come across as too malty, really a good balance between tart and heavy.

This was poured into a tulip. The appearance was semi-dark brown almost black in color with a finger’s worth of white foamy to fizzy head that quickly dissipated. Lace is barely there. The aroma had a nice blend of black cherries to a dark chocolate malt. A light sour grape skin trickles out underneath and some signs of grassy hops lay underneath with a settling Belgian yeastiness. The flavor brings about a nice sweet to sour to tart to semi-bitter tastes flowing into each other with a light Belgian yeasty/breadiness strolling in underneath. Blends right on into the aftertaste and slides into the finish. On the palate, this one sat about a light to medium on the body with a fair sessionable to sipping contour over my tongue. Good carbonation. ABV felt appropriate. Overall, nicely done Belgian dark ale worthy of having again if I could get it.

Brown / deep brown in color and clear on the edges. A nice head that settles to a solid ring. Visible lacing.

Taste is sweet chocolate and cherry, a bit of coffee, a bit of wood, and a tart finish.

An interesting beer. Blending the sour with a stout works well. This reminds me of Chocolate Covered Black Angel but more stout like. The balance is definitely in favor of stout and not sour. The finish is all sour though but in a mild cleansing way. Drinkable but perhaps a bit too sweet. Still recommended.

Was described to me at a GR bar by the bartender as a 'sour stout', though i've seen it listed as a fair few other styles. As I don't get too hung up on the label so let me enjoy this as it is, and enjoy it I did.

A nice looking brown to black pour with a tan head that lingers for a minute. Yeasty notes pair well along with dried fruit here to combine for a complex and well rounded ale. Not sure of the level of tartness, I mean - this is not a sour ale by the standards that others have set. If anything the sour/tart notes complement rather than overwhelm the rest of the taste profile. So remarkably this is a balanced yet also funky blend of all of its components.

This one was a bit strange. It is a wild ale, but drank more like a Belgian strong ale to me. It was fairly boozy and was very dark. It had notes of dark fruit almost like a quad.

From the CAN: "Freshly Brewed in Michi[CAN -] Special Limited Release"; "Tier 3 Single Batch Release"; "BELGIAN INSPIRED DARK FARMHOUSE ALE This hearty dark ale is fermented with our rustic Belgian yeast strain which gives the beer a farmhouse tartness followed by big dark chocolate notes, and hints of black cherries. Fermentation temperatures often climb past 90 [degrees] F which builds the distinctive flavors. No adjuncts are added to this beer - these robust layers of flavor are yeast driven. Listen to that lunatic in your head, dust off that vinyl, pour the beer into a glass and sip your way into a happy, chilled out groove."; "GLASSWARE & PAIRING A goblet or small tulip allows one to quaff the roasty aromas and fully appreciate the farmhouse qualities of this delicious beer. Stilton or blue cheese, charred steak, black cherries & chocolate cake all work magic on your palate when paired with this beer."

As you CAN imagine, I have the 2011 remaster of "Dark Side of the Moon" playing as acCANpanying music as I CANduct this review, beginning with the Crack! A vigorous in-glass swirl raised a brief finger of foamy, deep-tan/light-brown head that hung in for a while and then suddenly became wisps. Color was Black/Opaque (SRM = 44), allowing precisely ZERO light penetration. Nose had an intense charcoal smokiness, underlain by a leathery smell along with notes of dark chocolate; dried dark stone fruits; a subtle nuttiness & blackberries (!). Mouthfeel was unexpectedly big, full, thick & creamy, like a dollop had been scooped onto my tongue. I was really surprised by this and it kind of gave me pause. The taste was very variegated with my initial thoughts being a Cadbury Fruit & Nut Chocolate bar, but made with Dark, rather than Milk Chocolate and then the smokiness began to set in, followed by a slight tartness, like persimmon. Wow! It was on the finish that I really began to sense the tartness, especially along my jaws, underneath my ears, at the hinge. I generally do not like Tart and/or Sour beers, but this garnered a pleasant reaction for me. The smokiness really began to permeate my sinus cavity and after a period, I could not taste much more than some and tart. Where was the alcohol? In mah feckin' haid, that's where, ye daft c**t! F**ksake, it came out of nowhere, like I had fallen asleep on the tracks, only to be awakened by the approach of a fully-loaded freight train! Oi! If several of their previous offerings had been dangerous, this was downright deadly!

The beer up front hints of chocolate, roasted malts, plums, sweet dark fruits along with spicy yeast notes as the saison part of the beer comes in. The mouthfeel is medium plus and creamy. The alcohol is extremely well hidden.