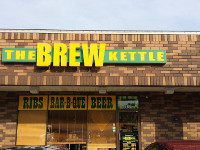 Good selection of beer and often quality visiting handles. Service is always good and bartenders are helpful to new visitors. The food is very good, far above typical pub food. The smoked wings are fantastic. One of my favorite places for a quick beer or lunch.

A pretty well known spot. Some of their beers bring home major silverware. I was really excited to visit the taproom. I was kinda let down. It's just a restaurant. Nothing really special about it. I'd already tried all the beers they had on tap. Those beers are solid, but I was hoping for something you can't pick up at the grocery store. It's still a big time spot everyone should visit.

Overall, a decent place. They serve their own beers as well as some other breweries. Brew Kettle beers were good. I had a salad, and it was fine. Service was as expected.
Can't really say anything bad about this place, but to be honest, nothing really stood out either.

We stopped here on a Thursday afternoon for a late lunch and to try their beers. The pub is located inside a strip mall that appears to be mostly occupied by Brew Kettle. Ample parking is at the front. The interior has great vibe to it with brewerania covering much of the wall space, and you could smell beer brewing. I noted a small patio behind the building. The place was not busy at mid-afternoon on a Thursday so we had very good service.

There are 30 taps here, but only 10 are house beers and the rest are guest taps, some of which were tempting but we came here to try the house beers. We ordered sampler glasses of 6 beers to try to arrive at an overall evaluation. All of them were brewed very well to style so that we ended up giving an overall 4.0 rating to them. We didn't place any in an exceptional category, but the notable ones were the Kitka Milk Stout, the Trebu Cliche Belgian Saison (which tasted almost like a Trippel to me), and Black Rajah IPA.

We liked the food that we ordered. They have great BBQ here. This place has been on my radar to visit for 5+ years, so a vacation trip passing through this area was reason enough to hop off the turnpike to visit here. Highly recommended.

A real gem. A good selection of house beers as well as a variety of guest beers, including some from Ohio. The smoked chicken wings are great, and the walls are lined with a collection of beer trays.

Settled into a parking lot just off the thruway on a main strip in Strongsville, it's got a new brick/old school feel to it as part of a small strip next to an affiliated wine shop. It's bigger on the inside, or so it seems, as it takes up continuing space you can't really see from outside. It's cluttered by in a homey sort of way. In front is the merchandising, host's desk, counter with the register and some beer coolers behind it, to the left and middle the booths and tables. A large industrial steel door, open when the brewpub is, separates a large bar area with more tables and a lot more clutter. A large chalkboard displaying Brew Kettle beers on tap and in bottles as well as the dozens of guest taps and bottles is on a wall in each section.
The service has been good both times I've been, and the staff is both friendly and generally quick. It can be very busy in there, and they still come back pretty regularly.
The beer was excellent, and there was a great selection to choose from of great quality both from Brew Kettle and otherwise. The sample paddle was great, with an informative numbered list that made selection fast and simple, and you can then correlate the number on the paddle with the numbers on the list in front of you.
The food exceeded expectations by a wide margin. I was prepared for good food, but this went beyond that. It is some of the most impressive food, smoked or otherwise, that I've had at a brewpub.

Love the Brew Kettle, if it weren't for the wait, I'd go there all the time. Unfortunately, it's always packed and there is almost always a wait, no matter when you go in and whether you opt of the bar or for a table somewhere... which I guess is a good indicator of what they offer. That said, I don't quite think it's worth a 45 minute wait or more to get a beer and a meal. The food is really good, decently priced, and there's a lot of options, especially when it comes to some of the more unique things like BBQ spaghetti w/ pulled pork or the messy pulled pork salad.

The building is a little confusing at first. Where is the entrance--front or back? Once you realize the entrance is in the front, where is the door? Well the door is to the left, but not the leftmost door. Where the hell is the bar once you enter the door? It's a very odd set up, with a wide open and awkward seated area directly next to a checkout counter in front of the entrance. This area is strewn with brewing tchotchkes to keep your eyes busy if you happen to be waiting in line for something special.

The bar is a short walk to the left in a separate room, and it seems relatively long when it's not busy, with a dividing wall that leads into a different room with additional space. When it's busy, the bar area will get jam packed, so scooch on up and get settled. Once you do this, The Brew Kettle grows on you as you realize the respect they have for quality brews, which allows them to have a strong draw for the rarer, finer things out there.

Their tap list largely consists of half their own stuff, sometimes even less, which is all top notch. The other half includes a few ciders and meads, often a few of those are either not easy to come by or else are things you might not have wanted to buy off the shelf due to price. The rest of the tap list is a good, strong selection of highly regarded, smaller batch brews from elsewhere--state-, country- and worldwide. They very often have a lineup of at least three or four beers from a single brewery, which is pretty cool if you want to see how they stack up to the Brew Kettle's work. Service is attentive and knowledgeable, as well.

Food here is "bbq" and is plentiful, but having spent a lot of time in the South, I wouldn't necessarily call it authentic or good. Is it edible, even enjoyable? Sure. But anyone coming from the South would be highly disappointed by the lack of smoke and the dryness of most of it. The chicken wings were my favorite, but you're safest sticking with chili and burgers and the like. There are plenty of options on their huge menu either way.

The ultimate mess salad (topped with pulled pork and cole slaw was excellent (according to my wife) and the smoked wings were also very tasty (according to my taste buds). I sampled four of their beers with the Big Woody Lager coming out on top. They have a good selection of other beers that you can sample. All in all a good place to stop if you are driving along I-80.

Overall great experience. Great line up of beers on tap, and great food. Last time I was there, brewer was actually behind the bar and served me my beer. I wouldn't have known otherwise, but my wife and I were having a beer at the bar and talking about our upcoming homebrew recipe, which we were going to buy there before we left. Next thing I knew, he was chatting it up us, and helped us complete our recipe. Very cool!

Overall a cool place and I enjoyed my visit. Food was terrific. The service was quick and friendly. Our waitress seemed knowledgeable . . . My only complaint about The Brew Kettle was the lack of house brews. They carried a lot of beer from many respected breweries but only had about 7 or so house taps. If in the area I would go back again for sure though.

I like this place as the service is usually good and the draft selection can beer great but the pricing is out of hand. A lot of guest beers are at the $1.00 an ounce or more price point. At times their draft lines yield flat beers. The food and atmosphere is good. Just can't get over the pricing so I Andy go occasionally now. Worth a try but has taken a step back since the ownership change.