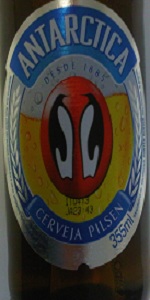 269 ml can, drinking in a glass. Thin, persistent foam, leaving laces. Terrible metallic notes, and of cooked vegetables. Watery, no smoothness. Only its powerful advertising strategies may explain why it sells so much.

A 355 ml glass bottle, served at 6° C poured into a pokal glass. Clear light yellow color with a poor head. Faint aroma with a hint of grain. Taste is similar to aroma, nothing exciting. Watery with a medium carbonation. Rather short and faint finish.

That's it Kleber, only to get high the skull, that was good kkkk! The aroma sent me, again, to my children and family parties; but after a few seconds the flavoring already gone. Golden color and a certain bitterness felt that persists at all times, unlike the aroma. Had never taken, even if it was only to swell my "tastings"...

taste:  typical light lager with hints of cereal as well as light malts and a touch of hops. Mild but lingering aftertaste more clearly reveals the hops.

smell: faint cereal and light malts with a touch of spicy/herbal hops.

O: about average for this style in this area. Certainly not worth seeking out but passable.

12 oz can poured into pint glass. Appearance is pale gold and clear with cascading bubbles. No head to speak of. Nose is pretty awful, notes of sour grain, lemon, corn, and metal. Taste isn't quite as bad as nose implied as there is more bready malt character to cut through some of the off notes. Some sweet fruit juice like notes that seem quite out of place come through at the finish. Mouthfeel is light and well carbonated. This is not a good beer, even for and already sub par style.

A: Pours an absolutely clear pale yellow forming a medium bubbled and aired head. Low retention and lots of lacings left in the glass

O: One of the worst things called beer that I've ever tasted

Pale Yellow color. Strange enough this Adjunct Lager produced lots of thick head with low to medium retention and leaving traces through the glass.
Faint aroma of non-malted cereals but some floral hops identifiable.
Taste of cereals with a bit refreshing and spicy feeling.
Dry aftertaste with a medium bitterness. Light body and good carbonation.
I remembered why I could not stand Brahma and was on the Antarctica side of the split population of Brazil, for its bitterness. Nevertheless all the formulas seem to be pretty much the same now, and it carries some annoying corn note.

Taste of corn, quite light...adjuncts

Overall, really no need for another one. If a beer can't taste good while sitting poolside in Rio....then it is not good!

Appearance (2.5): Very small, short-lived head on this, snow-white and starting around half a centimeter thick. No fingers to measure this one—this beer is fingerless. Some lacing, actually. The body is a pale yellow, and clear. Well, at least there’s some sudsy lace.

Smell (1.5): Kind of smells like the water cup at a beer pong table: vaguely beer-like, but mostly water. Some very plain barley scent that might be most accurately measured in parts per million. Some sweet corn? I suppose the lowest score would be if it legitimately smelled bad, but this just doesn’t smell like anything to speak of.

Taste (1.5): Following the nose, this is more of a palate cleanser than anything else. It’s got a strange aftertaste though, like unflavored grits mixed with some overcooked vegetables. There is just the GHOST of a hint of bitterness in the finish, vaguely herbal and vegetal. I’d love to say that it has a distinct pilsner yeast note, but it simply doesn’t.

Mouthfeel (2.0): Well, there is some carbonation. It’s low-key, fizzy, and dies quickly, though. What this beer DOES have going for it is quenching-ness. It’s very light, goes down easy, and I suppose it has a somewhat dry finish, for lack of sweetness or viscosity.

Overall (2.0): Can I give this a 1.75? This is definitely not a good beer, and not a good representation of the style, either. To be perfectly honest, with this little taste, body, and feel, I’m shocked that it even retains 5% ABV. That said, the beer was meant to be light, inoffensive, and drank in large quantities, all of which it achieves without much trouble. It’s not the worst of the worst—that would be a slushy of Classic Ice, Sam Adams Cherry Wheat, and Rogue Chipotle—but it does not stand out in any way, whatsoever, and is forgettable at best. Don’t get me wrong, I can dig a good AAL once in a while. But even in terms of the Brazilian market, with which I consider myself relatively familiar, this is far from anything notable.

A: The beer is crystal clear light yellow in color and has a moderate amount of visible carbonation. It poured with a thin white head that quickly died down leaving lacing on the surface and a thick ring around the edge of the glass.
S: Light aromas of adjunct malts, particularly corn, are present in the nose.
T: The taste is very similar to the smell and the flavors are quite mild.
M: It feels light-bodied and a bit thin and watery on the palate with a moderate amount of carbonation.
O: This beer is very easy to drink; the smell and taste are not that offensive but then again there’s nothing really special about either of them that would make me want to try another glass of these.