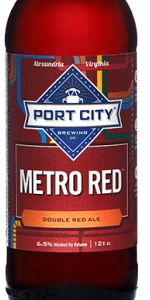 Notes: Metro Red is our hoppy red ale, a nod to the West Coast. There was so much positive feedback when it debuted for DC Beer Week 2015 that we had to bring it back. The 6.5% ABV beer marries juicy, citrusy hops with a biscuity, slightly sweet malt character – a study of boldness in balance. Take a sip and think of orange marmalade on toast.

Pour has a nice off-white/tan head that lingers for several minutes. Color is a lovely copper-amber. Smell has a bit of hoppiness, caramel, and a nice burst of citrus fruits. Taste starts with the citrus/hop flavor in the front 1/3, transitioning to caramel/hops in the remaining 2/3. Feel is smooth with a slightly bitter aftertaste that is perfect after a long walk outside.

Reddish tea-like color. Very cloudy until about half way through when it cleared up (odd). Sticky, foamy lacing. Bright citrus hop smell. A lasting bitter aftertaste mixed with a caramel sweetness.

Visited the brewery and had a lovely time. I tried 3 beers and decided to come home with a 6 pack of this. A really nice hoppy red. Great balance and well exucuted. yb

Decanted from a 12 oz (355 ml) bottle into a conical pint glass;; production date 3/29/17.
A: Pours a cloudy caramel color with a short lived, quarter inch head and no lacing.
S: Floral yeast esters and toasted malts abound. Molasses, caramel scents also present.
T: Sweet with strong grapefruit flavor predominating but not eliminating some graininess and spiciness.
M: Full bodied with solid carbonation. Seems to fill the mouth.
O: Didn't know what to expect from a "double red," but this has excellent aroma and flavor, a solid mouthfeel and strong if not exuberant carbonation. Would certainly have one in the future.

A: The beer is hazy dark amber in color with some hints of brown hues. It poured with a half finger high off white head that died down, leaving a large patch of bubbles on the surface, a narrow collar around the edge, and lots of lacing down the sides of the glass.
S: Light to moderate aromas of citrusy hops are present in the nose along with notes of toasted malts.
T: The taste follows the smell, starting off with flavors of citrusy hops—oranges seem to stand out in particular—along with underlying notes of biscuit and toasted malts. Hints of caramel malts also become noticeable as the beer warms up. The hops lend a moderate amount of bitterness.
M: It feels medium-bodied on the palate and has a moderate amount of carbonation.
O: This beer is nice and hoppy, but has a good amount of underlying malts to somewhat help and balance things out.

A well crafted standard American Amber Ale. Very nostalgic beer from what reminded me of a beer I would have drank back in the 90's and early 2000's craft scene. Very abundant back then, but fairly rare now adays in the 2017 timeframe.

Pours hazy copper / reddish brown with lots of head.
Smell is roasted malt / caramel. Taste is more of that roast, more than matched with with big earthy bitterness. Dry finish.
Feels substantial and chewy.
Overall not my favorite style but I can appreciate it as well done.

Pours a deep murky ruddy brown. The head is light tan and has great retention, leaving big amounts of tight sticky lacing. The aroma is a nice mixture of caramel and darker bread malts and some citrus hops. The taste is much like the aroma but dialed back a bit. The body is a little lighter and mostly smooth.

Poured from the bottle into a Spiegelau IPA glass.

Fleeting tan and creamy one finger head, manages a bit of leggy lacing and sheen while settling. Body color is a murky brown, slightly red but rather dull.

Aroma is kind of interesting but also odd. Faint tropical sense and a bit exotic on the hop front, but with a lingering chemical taffy sweetness of caramel that is very odd, actually smells like rotting papaya. Must say quite distinct, but not really the most pleasant either.

Flavors meld a little simply, but with some interesting appeal. Lighter malt to toast flavors in the mid palate, but with a bit of a watery body. Clingy hop mix of pine but also some very sweet sort of tropic notes that unfortunately don't last. Clean fruit hop angle, but also washes away a bit too fast, but with some indistinct hard to pin down quality.

Palate is a bit of an odd ball. Heads to slightly larger than your regular amber, but also lacks a bit of depth to be called one and lacks the hop punch but with a very distinct angle.

Ruby red, with a rocky off-white head. Aromas of grapefruit and orange. Flavor is a great blend of citrusy hops and caramel malts. Just the right level of carbonation. Another solid brew from Port City.

The beer pours a nice head that dissipates quickly. The beer itself is a nice clear ruby color. It's a pretty good looking beer.

The beer has a pretty nice nose. There's a strong grapefruit bitter hop presence with a nice toasty and light caramel malt notes that work well.

The taste is also very good. The taste has the same notes as the smell. Although the hops are stronger.

The feel is decent. Nice tickling carbonation on the tongue. Medium body. Nice and dry finish.

Overall, a pretty good red ale. Get it.

Metro Red from Port City Brewing
Beer rating: 85 out of 100 with 46 ratings