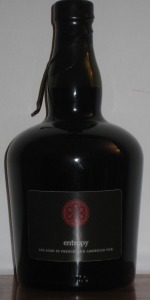 After I finally muscle-wrenched the wax off only to find a cork snuggly hidden underneath, I easily uncorked it, and poured about a third of the bottle for me and a friend, about 5 oz each.

We sniffed it from the bottle and it smelled divine - much richer and deeper than your typical barleywine. The pour was a nice gurgle from the unique bottle and the beer was a dark clear rosy brown color that settled right out. The taste was simply luxurious - a very dark barleywine, close to a port, with only a nice wet taste of the 14.2% I was curious as to how I would like the "still" nature of the beer would work, and I loved it - it was just a natural part of it. This was quite simply a real treat and I wish I'd bought another bottle at Mystic while I could have. Very glad I splurged on de Cacao also, which I look forward to trying. Cheers!

Postscript - as I had heard - I think from the folks at the bar at Mystic when I bought it when they were closing - you can put the cork back on and put it away and drink the rest 6 months later, no problem. I did this a couple times but unfortunately found neither the second or third pour to be as impressive as the first. And the last - because this was such an old bottle, had lots of slimies in the bottom, which, as opposed to a yeasty pour of an old IPA, was more slimy and kind of nasty, so I had to ditch about an ounce at the end. Never mind, my opinion was made up upon opening the bottle with the first sniff and pour, and if I was fortunate enough to get another bottle I would in a second!

Reviewed by Miccal from Vermont

Taste: dark fruit out of the glass, like Utopias, slight alcohol burn on the back, lingering caramelized plum

Feel: a small sip fills the mouth with aroma, thick and viscus in the mouth, flat and smooth

Overall: this is a great still ale I've only had a few and for the price this is a better value, and flavor than Utopias. I wonder how it would be if I let it age for 10yrs. I tend to drink 2oz at a time like an aperitif, so if you are looking for a pint look elsewhere, this is a sipper to be sure.

Lots of smooth semi sweet chocolate with a raspberry and brandy nose.

Nearly flat but not very full in the body. Chocolate start and then the alcohol kicks in. Not much of an aftertaste--some sweetness and strong alcohol. Rather simple flavor for the style.

5/5  rDev +25.6%
look: 5 | smell: 5 | taste: 5 | feel: 5 | overall: 5
Only the second beer I have opted to give all fives to. Mystic produces some of the best beers in this state and this is a complex masterpiece. Taste is rum, dark fruits, plum, toffee, vanilla, caramel, alcohol, and oak barrel. Just blends together perfectly with multiple layers of complexity. This to me is the top beer coming out of Massachusetts.
Mar 30, 2015
Rated: 4.5 by gferg10 from Massachusetts

Reviewed by tonytuffnuts from Massachusetts

Fantastic presentation in a uniquely stout bottle that's fit for a cordial, corked, and preserved with a wax seal.

Pours real dark without any head -- almost like a syrupy coke out of a flat fountain.

Tastes like the intersection of a whisky, a big red wine, and a reprised Belgian strong ale. Sweet, boozy finish reminiscent of a bourbon.

Feels a bit viscous. Very smooth without a bite.

While not that drinkable, it's a fascinating product that pushes the envelope of what beer is -- and of what can be done with beer's limited ingredients. Experiments like this are the hallmark of American brewing, so muxh respect for the innovation.