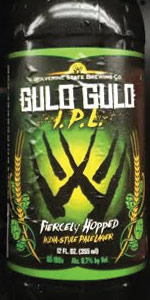 Notes: This ground-breaking style combines the essential ingredients and hopping methods used to create a world-class I.P.A. Then using our expert lagering techniques and house lager yeast we created an instant favorite among the existing and steadily growing number of “hop-heads” and craft “lager-heads” in the beer world today. Gulo Gulo I.P.L. is hopped with Cascade, Chinook, Columbus, Warrior and Pilgrim hops. It is dry-hopped once in the fermenter and then a second time with whole-cone Cascade hops before packaging.
View: More Beers | Place Reviews
Recent ratings and reviews. | Log in to view more ratings + sorting options.
Rated: 3.65 by shreead from Michigan

3.77/5  rDev 0%
look: 3.5 | smell: 4 | taste: 3.75 | feel: 3.5 | overall: 3.75
Been looking forward to trying an IPL and this is local so picked one up for me to try and it's an interesting thing. Don't get me wrong, I enjoyed it, but I spent most of the drink trying to figure it out.
The pour is a dark, almost murky amber and almost no head. Well, not sure what I was expecting so maybe it's right?
The aroma is compelling, perhaps the best part for me. Floral, bready, yeasts, malts - all combined into an unusual but good aroma.
The taste started confused but settled down as it warmed a bit. Hard for me to define, the closest I can get is a thinner version of an ESB.
OA, I may get some more to see if I can better define it, but as there are so many other beers out there that I already know I like more, I may not.
But hey, at least give it a shot. You never know what will flip your switches.

Reviewed by loudmacleod from Ohio

Poured into a shaker pint glass, this was a cloudy, dark amber color, with an absolutely monstrous, creamy beige colored head. Needed three pours over about 15 minutes. The color makes me think it is at 5 months old, and the head screams "infected." Not at all auspicious. Hoo boy...

Musty and tea-like aromas in the nose. Smells like sweet, bready malts and dead hops. Yep, this is an old one.

Tastes like an old, malty beer that's been spiked with tea.

Fairly clean, lager-like mouthfeel. Sadly, that's not much help at this point.

I really wanted to like this one. I rather like IPLs, especially as we move into spring and summer. This one is probably excellent when fresh. Unfortunately this was fresh quite a while in the past. This could easily be from over a year or two ago, and should never have been sold this old. Were I in Ann Arbor, I'd grab a fresh one, and report on it instead, but as that's unlikely to happen anytime soon, I gotta go with this one. Can't always be winners.

4.23/5  rDev +12.2%
look: 4.25 | smell: 4.25 | taste: 4.25 | feel: 4 | overall: 4.25
Served on tap at the Wolverine State Brewery in Ann Arbor, Michigan.
A: Pours a crystal clear, bright amber color with ochre highlights, a one and a half finger, off white head, ring and cap plus retention, but luxuriant, complex lacing.
S: Aromas are tangerine, brewing ice tea, and caramel.
T: Semidry. Flavor pallet similar to the nose. Balancing bitterness.
M: Light to medium bodied with strong carbonation. Drinks very smoothly and cleanly.
O: A delicious take on IPL. Mild, but fruity. Light, but flavorful. Enjoyed it.

4.14/5  rDev +9.8%
look: 4.25 | smell: 4 | taste: 4.25 | feel: 4.25 | overall: 4
Got this a few months ago on a vacation my wife and I went on a vacation to Michigan. This has been hiding in the back of my fridge behind a bunch of other beers until tonight. Poured into one of my pokal glasses, this beer pours a slightly cloudy/hazy medium copper color with a very fluffy, just slightly off-white, head that's well over an inch thick when first poured that settles to a solid inch thick with excellent lacing and good retention. Aromas of slightly toasted, bready caramel malts with a healthy dose piney, floral, and citrus hops. The taste is pretty much the same, with slightly toasted, biscuity malts with a nice slight zesty spice and resinous, floral, piney, and slightly citrusy hop bitterness. Good balance of the different flavors here. Has a somewhat crisp, slightly chewy and sticky, also fairly smooth, medium bodied mouthfeel with moderate carbonation. Has a pretty clean finish with a nice sweet and hoppy aftertaste. A very interesting beer here all around.

Reviewed by ygtbsm94 from Utah

Reviewed by nipsip from Michigan