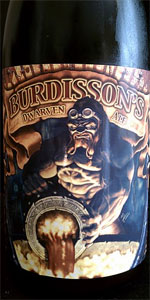 Reviewed by PorterLambic from Florida

2.8/5  rDev -22.2%
look: 3.75 | smell: 3 | taste: 2.5 | feel: 2.5 | overall: 3
Pours a rich, dark brown with just a little light getting through at the edges. A big, fluffy, tan head subsides to a rocky film, fairly thick at the edges, leaving some decent lacing behind.
Smell is sweet, chocolate milk, roasted malt, vanilla, caramel. Very well balanced with a welcome complexity. Reminiscent of an oatmeal stout - which I love - in some aspects but still an English brown.
Taste is roasted malt with an unexpected tartness, almost vinegary (albeit subtly) in nature, some dark chocolate and nothing else. A bit of a letdown after that wonderful nose. Here it reminds me of a sour, another favorite style of mine. But odd.
Watery, lightish body, lightly effervesced. Not bitter, this brew is a bit all over the map. Sweet in nose, sour in taste, with roast malt throughout. A bit hard to put your finger on. Overall a good beer but it would be better if the nose and mouth got something similar, not such wildly divergent experiences.

Reviewed by Lawl3ss from Texas

Look- Pours a rich deep brown, near opaque. Three fingers of frothy beige head that sticks around for quite a while, very nice lacing. By the look of the bottom of the bottle, this one was bottle-conditioned, but I don't see any mention of it on the bottle.

Taste- Quite similar to the nose, black coffee and treacle lead the way with a stronger feel of biscuit and nutty malts. Something of an old ale twang mixes it up with a hint of astringency from the char flavor. As it warms, the toasted brown bread flavor becomes stronger and the coffee pulls all the way through the finish, rather than making way for nuttier flavors.

Mouthfeel- Much lighter than expected, and in a welcome way. Medium body, medium carbonation, light feel for the style. Above average drinkability, I could have a few.

Overall- Pretty nice, and I wasn't really expecting too much. Very nice balance between rich flavor and quaffabilty. I also get the impression that this is a blended beer with some portion of old ale a la Guiness, which lightens it a bit and adds a bit of flair. I don't recall what I paid for it, but I'd certainly revisit it if I spotted it again.

Reviewed by shand from Florida

Burdisson's Dwarven Ale is a surprisingly interesting beer. I'm not 100% certain it's supposed to be this interesting... I just had to buy it when I saw it because I'm a huge nerd and the D&D theming really appealed to me. It pours out a hazy brown with tons of floaties. The aroma is full of coffee and chocolate malt and ... is that just a little hint of a sour twang? The taste confirms the suspicions from the nose, with a nice coffee and chocolate malt going on with a very lightly sour finish that works well enough with the coffee to where it's hard to tell if it's an infection or intentional. The mouthfeel is light for the style, but it works with the light sourness, and the drinkability is actually very good. I'm not sure if this is an accident gone right or the brewer's intended flavor, but I rather like Burdisson's Dwarven Ale. The hint of sourness makes it taste just a bit rustic, suiting the beer's theme.

Reviewed by FGCUkyleOz from Florida

Taste: Big roasted malt taste up front that gives way to the strong embrace of chocolate and nut. Sweet and bold this beer's flavor awakens
images of dark musty taverns crowded with to the brim with Dwarves coming home from a hard, gritty day in the mines. Ends with a dry but
still sweet finish and just a tiny twang of sour that asks to be quenched with another sip.

Mouthfeel: Light mouthfeel for such a bold brew. This lends considerable credit to the idea of this being a celebrated tavern standard
in the lore.

Overall: This novelty beer could have been mediocre and the target audience still would have eaten it up. Fortunately this is far from
the case; this beer is worth every penny. From first whiff to the last drop Burdisson's Dwarven Ale meets or exceeds all expectations. The
light mouthfeel makes this beer very drinkable but does not detract from the fantastic full bodied flavor. This Dwarven ale's fanciful
lore, packaging, and true-to-character flavor make this a beer that would not be out of place at your next D&D session.

Reviewed by GallowsThief from Florida

A – Poured out a creamy brown with about a finger of tan head that settled down with decent retention. Fair amount of carbonation evident in glass.

S – Caramel and vanilla first up with a bit of toffee. Nice pleasant smell.

T – Like the aroma this one starts out with a fair bit of caramel malt. Lightly sweet. Has touches of vanilla and toffee. This one follows the smell closely all through. Finishes off with just a touch of alcohol on the palate.

M – Medium bodied with a fair amount of carbonation. Has an active feel in the mouth.

O – This is a nice all around brew. I enjoyed the aroma and the tastes followed right behind. Nice drinker. I could have a few of these. Well worth picking up.

Reviewed by srhoadsy from Florida

Aromas of toffee, biscuits with some hints of nuts and coffee.

Flavor follows through from the aroma. Nutty and malty but not overly sweet.

Mouthfeel is light to medium. Not overly heavy for such a flavorful beer.

Overall a very impressive freshmen effort from this brewery. Easily one of my favorites from the festival. Can't wait to get ahold of a six pack and try under less hectic setting.

Reviewed by JoeyBeerBelly from New York

L - dark amber color with a off-white head that thinned to a layer leaving some thin lacing.

T - starts out sweet and malty but then there's some fusel alcohol that takes you to the end.

O - not my cup of tea or should I say, English Brown Ale.

Reviewed by RossCain from Florida

A: Pours a deep brown with little light making its way through the glass. The pour tops off with a small, tan and bubbly head that quickly fades into a nice cap gripping tightly to the sides of the glass. Tight webs of bubbles form a ring around the glass upon each sip. Darker and much less translucent than I had expected for a brown ale but overall an attractive appearance.

S: Smells of sweet malts and bread upon the front of the initial waft. Lightly toasty qualities peak through mixing with notes of slightly burnt toffee. There is something slightly off in the nose that I can't quite put a finger on... mineral water by chance? The characteristic was not a deal breaker, it was just a tad unwelcome given the other nice aromas that popped up.

T: Starts off with a moderate character of biscuity malts with an assertive toastiness in the flavor profile. Towards the middle of the profile, the is a very slight rush of earthiness balanced with the (very) subtle bitters of the hops which peak in and quickly bow out. Finishes with a light cocoa profile and departs the palate without leaving much of a footprint.

M: Light-medium bodied, a tad thin, and over-carbonated. Overall, I was expecting the mouthfeel to smooth and creamy but I was met with a rather assertively dry finish with excessively prickly carbonation on both the lips and tongue (possibly due to the bottle conditioning?)

D: Overall, the beer was decently refreshing and I was able to finish the bottle. The flavor was agreeable and easy to down, however both the aroma and definitely the carbonation/finish could use some work. I'd be interested to see what some age does to this beer given it is one of few bottle conditioned brown ales I've come across.

Reviewed by Kegatron from Pennsylvania

Pours a deep ruddy brown, topped with a tight foamy cap of light mocha head. This retains with a creamy ½ finger that stays rich & frothy, leaving back a ton of thick lacing. Nice look to this. The aroma smells of toasted nuts and lightly buttered biscuits, along with some sweeter caramel flavors. Leafy hops glide along the back, which mingles with a bit of a light mineral feel here in the nose. I'm also picking up a smidge of alcohol warmth about every other whiff.

The taste is caramel malts and toasted bread. Hops have a presence here, with a leafy and spicy bitterness. Not super complex by any means but it gets the job done. This is fairly dry on the finish with those same lingering mineral or even medicinal notes that I picked up in the nose. They aren't off-putting or really even distracting but just interesting to note. The mouthfeel is medium bodied and crisp on the tongue but stays pretty smooth and easy for the size, despite some overall heft to the feel.

I'm interested to find out more about this once more info is available, as there seemed to be a bit more going on with this than just a traditional English Brown Ale (it felt almost like an Altbier to me at times), and there isn't a whole lot out there about this beer right now. It was certainly interesting and quite drinkable for 6%. I wish that I had another bottle to try again later.