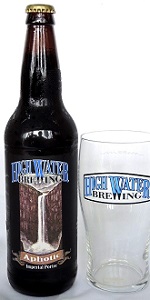 Formally defined as the depths in water beyond which less than one percent of sunlight penetrates. Aphotic is a beer with a very dark side. Just one sip and you will understand the true depths of its darkness as the deep, luxurious layers of malt rich-ness tantalize and tease your taste buds.

Reviewed by JamarcusMarinovich from California

Reviewed by unlikelyspiderperson from California

4.18/5  rDev +5%
look: 4.5 | smell: 4 | taste: 4.25 | feel: 4.5 | overall: 4
Pours a thick, almost chunky black, with a thick and resilient cocoa colored head. Already suspecting that 'imperial porter' is code for stout.
Smell is lightly roasty and mildly bitter. coffee and light hop notes.
Taste is rich roasty malt up front. Surprisingly typically porter, roasty malts dominate without veering into coffee or chocolate flavors. Very subtle and well balanced.
Mouthfeel is also surprising in its porteriness, the body is quite light in spite of the robust flavor. This is way too drinkable for over 9%
Overall this is one I expected to be an unlabeled stout but no no no. These folks have put together a truly 'imperialized' porter. Rich and roasty malt flavor, light body, soo delish. If you like porters I think you'll like this, if you like stouts I think this will offer a nice 'lite' take on your style

A nice imperial porter, perhaps a tad too boozy yet still delivering some rich dark grain and chocolate-like character.

O: An outstanding Imperial Porter... great flavors and feel.... spot on for the style. I bet this would be badass after some time in a barrel.

4.21/5  rDev +5.8%
look: 4 | smell: 4.25 | taste: 4.25 | feel: 4 | overall: 4.25
Dark colored with a receeding light chocolate head. Smells like an ice coffee from Wawa with some sweetness. I almost detect some cherries on the edge. Taste brings up the coffee with some bitter dark chocolate and roasted malts. Slight bitterness extends well through the finish. This brew hides the 9.3% pretty well. Somewhat less carbonation and a medium/thin feel. I'd call this one pretty decent !
Dec 03, 2017
Rated: 3.81 by WDJersey from Colorado

Winey taste with a more acidic sensation than typical big dark brews. Not very rich for such a big beer. Deeply dark and a little charred in the malt department. Rather bitter with an astringent finsh. Quite sippable but on the harsh side. From the 22 oz bottle purchased at Safeway.

Reviewed by Rogerlb from California

Taste is much more present; bitter chocolate, roast, molasses. Slight black currant sneaking in (as another notes, that's interesting). A bit boozy and creamy and burnt stick in the finish. Bitter seems much higher than the 38 IBU they advertise. While it has the relative thinness of a porter, and that "soda" texture, the taste is quite big, a cross between an American Stout and dark ale. Wow. So Baltic, it's almost Russian?

It's a little aggressive but nothing's taking the whole thing hostage. 9.3% is not an issue. Very well hidden, it's not hot at all. They're telling me "Aphotic" means the part of the sea that doesn't get sunlight. Yes this is dark. Similar to Flying Dog's Gonzo Imperial Porter, with the roast that won't quit, but a little less nuanced. Very much a sipper.

APPEARANCE: Clear dark brown pour yields a 2 finger, medium looking, creamy light tan head with very good retention. Head fades to a full wisp and clings to the sides of the glass as it recedes. Black body with no real carbonation evident. A splotchy wisp remains until the end leaving lots of lacing down the glass as it empties.

TASTE: Roasted and burnt malts with tobacco notes up front. Some chocolate and licorice at the swallow, moving into a bolder and lingering finish of tobacco, burnt malts, light chocolate, sweet cream and a touch of alcohol as well. Enjoyable.

PALATE: Medium body and medium levels of carbonation. Creamy on the palate, goes down fine and finishes a bit mouth coating. Creamy enough and enough weight as well.

OVERALL: Good stuff. This has a lot of the elements I really enjoy in a strong porter, including a creamy and heavier feel for the style. The two High Water brews we checked out were both of high quality, so I’ll definitely pick up more the next time I’m in Buffalo. Give this one a shot if you see it. Recommended.

Reviewed by vikinggary28 from California

Reviewed by TheSixthRing from California

Smell - Chocolatey aroma; milk chocolate and cocoa. A hint of roast and smokiness.

Taste - Follows the nose. Milk chocolate hits the tongue first, and is quickly met by lesser coffee roast and a touch of smoke. Cream. Faint notes of dark berry and anise show up as the brew warms. Earthy notes hit near the finish, delivering a bittersweet aftertaste.

Overall - A solid all-around Impy porter. Nothing fancy, it just gets the job done.

Rated by LiquidAmber from Washington

Reviewed by Jeffsta1 from Washington

Odd smell but not bad. Raisin? Currant? Licorice? Malt for sure.

Not disgusting but don't buy again.

Reviewed by ONUMello from Ohio