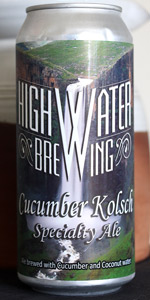 Notes: Prepare for a journey to the land of quaffability. Our Cucumber Kolsch is brewed with pure German Pilsner malt, fresh Cucumber and Coconut waters and the delicate caress of the finest German noble hops. Whether you’re relaxing at the beach or in your backyard, make the experience complete with this fine refreshing ale. From our hands to yours, enjoy the best nature has to offer.
View: More Beers | Place Reviews
Recent ratings and reviews. | Log in to view more ratings + sorting options.

Reviewed by jo1e984 from California

For this is my first, had half can and can no longer stand it. Wayy too cucumber-ish and I felt I am having salad, with hops.
Which isn't really a great combination in my opinion...

Reviewed by nsticco from California

3.53/5  rDev +3.2%
look: 3.5 | smell: 3.5 | taste: 3.5 | feel: 3.75 | overall: 3.5
Poured from can into a pint glass
Appearance – The beer pours a light golden color with a one finger head of white foam. The head has just a light level of retention, fading rather fast to leave a light level of foamy lace on the sides of the glass.
Smell – The aroma of the brew is huge of a cucumber smell mixed with a little bit of grain and a little bit of an herbal smell.
Taste – While the nose showed a ton of cucumber but little mint, it showed a good sum of the two right at the start of the taste. There was also a light grainy taste upfront which grows slightly stronger as the taste advances. Along with the grain the cucumber also grows in intensity and with a little bit of an herbal and earthy taste that develops at the end, one is left with a rather crisp spa water taste to linger on the tongue.
Mouthfeel – The body of the beer is on the slightly lighter side with a carbonation level that is quite high. For the mix of flavors and the style the feel is good and makes for a refreshing sipper.
Overall – A nice summer style brew. Nothing I would frequent on a high occasion, but quite good for a nice hot summer day!

Reviewed by jwc215 from Arizona

The smell is of (overripe?) cucumber with mint. Slightest touch of subtle noble hops.

The taste is of cucumber and mint. Vegetal in character. Mint becomes stronger as it progresses. Not getting much of a Kolsch character.

The body holds together decently enough. Too much mint in the aftertaste.

Not the "quaffable" brew it claims to be. Too vegetal and too much mint to be easy to drink much of. Okay at best. An odd novelty brew that is hardly a Kolsch.

3.79/5  rDev +10.8%
look: 3.5 | smell: 3.75 | taste: 4 | feel: 3.75 | overall: 3.5
Treated as a kolsch, this was poured into a stange.
The appearance was a thin copper color with enough transparency to see quite well through it. The head showed some initial foaminess but seemed to pop quickly enough to delve into bubbles, and a lot of bubbles.
The aroma screamed cucumbers, fresh and clean somewhat providing some adequate grassy details. Not much "kolsch" characteristics shining through here.
The flavor absolutely leaned into the cucumber fresh sweet attributes. In turn, the same aftertaste bled through.
The mouthfeel was between light to medium bodied with a kind sessionability about it. Decent enough carbonation. Chill feel rolling in the finish with strong cucumber notes.
Overall, the ABV seemed as projected, however, I really don't see this much as a kolsch. I could have again for me, but I would probably rate this higher if this brewery said this is a 'herb/spice ale" by style. Oh, and by the way, where in the hell was the mint? I missed that and would have loved to see it "shine" and "balance" this more.

Reviewed by Todd from California

3.3/5  rDev -3.5%
look: 3.25 | smell: 3.75 | taste: 3 | feel: 4 | overall: 3
16oz can from the brewery. Pours amber (kind of dark for a Kölsch) with a thin, creamy lace. Noticed sediment in the can, but none got into my pour. Nose is full of fresh and melon-y cucumber notes and plenty of mint. Body is light, but there's a firmness to it with a crisp carbonation and some smoothness. Tastes like it smells, but it's slightly vegetal. A semi-sharp rind flavor that livens things up, but the mint flavor is quite prominent. Dry overall, with some herbal notes and a crackery malt profile in the finish.

It is what is says (an ale brewed with cucumber and mint), and it's not bad, but there's barely any Kölsch-like qualities. I couldn't see myself drinking an entire 16oz can due to the vegetal flavors and level of mint.

Well, I suppose this turned out more or less like what the brewers wanted. It has a definite kölsch body and feel yet the cucumber is to the fore. All I'll say is that it's unique but will leave my cucumber experience with my salads.

Reviewed by Phil-Fresh from California

A: Moderate cucumbers coupled with light mint, and floral hops.

A: Light golden color, great clarity, with a moderate white head that has adequate retention, light lacing in the glass.

O: Solid; the beer has a great fragrant nose, however the beer's flavor could be better if the beer were a bit less vegetal.

3.99/5  rDev +16.7%
look: 3.75 | smell: 4 | taste: 4 | feel: 4 | overall: 4
im pretty jazzed on this, something a little different. a kolsch ale with mint and cucumber, but its not forced and its super natural. pours a little darker than expected for the style, but i get the point of the slightly bigger malt base, it needs to taste like beer with these flavors, not just some sort of seltzer water or something, and the ever so slightly more substantial grain base ensures that it does. the cucumber is fresh and natural in nose and taste, refreshing right away, with the muddled mint complexion well behind it as an accent flavor. its cool and mellow but also prominent in here, not quite to the perfume level, its more natural than that, but it is pungent for sure. the beer is dry and vegetal in the end, refreshing and summery, but still substantial enough to be a beer. pretty clever brew, and i have been overly impressed with all of the flavored beers these guys are making. nice to see them getting a little distribution around the country now, these beers deserve to be tasted! this is crazy, i bet it will be someones new favorite beer! my girlfriend would adore this...
May 31, 2017