Old And In The Way
High Water Brewing 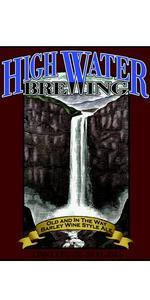 Notes: Old and In The Way Barley Wine Style Ale is brewed in the traditional English Barley Wine Style. Flavors of toffee, treacle and caramel emerge as the beer opens up. Enjoy this beer a little warmer to fully appreciate the depth and complexity of flavors in this beer. Brewed to be enjoyable as a sipping or fireside beer. Share one with a good friend.

3.93/5  rDev +5.6%
look: 3.75 | smell: 3.75 | taste: 4 | feel: 4 | overall: 4
Poured into a Fremont small snifter. Side by side tasting of properly cellared 2013 and 2016 bottles. Both poured into Fremont small snifters.
2013: Pours a dark, hazy orange brown with a quarter finger light khaki head with good retention and lacing. Aroma of caramel malt, dates, figs, dried plums, light oxidation. Flavor is dry biscuit and caramel malt, dates, figs, slight dried plums, a hint of oak and cocoa. Medium bodied with light creaminess. Flavor is dominated by dry biscuit malt and dates, closer to an old ale at this point. Fairly mellow, but not too complex.
2016: Pours a medium reddish orange with a thin, persistent light khaki head and light lacing. Aroma of caramel malt, dried plums and citron, a little orange and raisin. Flavor is mild caramel malt, candied fruit with orange, plum and citron, toffee. Medium bodied with light creaminess. This one has a more American style profile, with lighter fruit notes, however not with any of the hopping of that style. I'm not sure I've had a barleywine with this flavor before. It's a little sweet and relatively uncomplicated, but quite enjoyable.
Summary: these are two completely different barleywine and because High Water has some of their beer brewed by different breweries, I'm have to assume that these are two different recipes and actually different barleywines.The 2013 is closer to a classic English barleywine, but of the biscuity, maltier style rather than the more common plummy one. At five years, it has a clear aged large old ale profile and a nice mellow one at that. I regret not reviewing this one fresh, but I'm guessing that the original was biscuity too. It has aged well considereing that it is somewhat less complex than others of the style, but I'm a big fan of aged old ales, so this hit the spot. I'm not sure it would improve with any more age, but it seems to be holding its own very well. The 2016 is also a bit on the uncomplicated side, and as mentioned above, has more of the "triple IPA/American barleywine" profile of the base malt, but with slight hopping. That's probably a good thing for me because I'm not that enchanted with aged hoppy beers any more and this is probably more enjoyable at two years without strong hops. Despite the basic flavors, I liked this quite a bit. I probably would not age this much further as the flavors are nice and balanced right now and probably would not improve.
One of the more unusual of my comparisons of two aged beers due to the fact that the base beer was probably not the same. Fortunately, tasting barleywines is a reward in and of itself.
The rating is a rough amalgam of the two barleywines. Since I liked them both and they were relatively straightforward for each of their styles, the ratings were similar.

APPEARANCE: Pours a 2 finger, medium looking, creamy, off-white head with great retention. Opaque dark maroon red in color with no carbonation evident. Head slowly fades to a full wisp leaving some lacing on the glass. A splotchy wisp remains until the end leaving traces of lacing on the glass as it empties.

SMELL: Caramel and toffee with some spicy booze and red fruits on the nose. Slightly bread with bubble gum as well. Bold and boozy.

TASTE: Caramel and toffee sweetness up front with some spicy booze and piney notes up front. Bold finish of malty sweetness, piney hops, bitterness and some boozy alcohol too. Flavorful and plenty of bittersweet character.

PALATE: Medium body and medium levels of carbonation. Creamy on the palate, goes down fine and finishes somewhat mouth-coating. Some spicy booze lingers. Creamy and weighty for the style.

OVERALL: Really good stuff here. This reminds me of Laguintas’ Gnarleywine. Top notch flavor and feel here with lots of sweet malt character and hoppy bitterness as well. Really enjoyed this and will be picking up more next time I see it. Give this one a shot if you’re a fan of the style. Recommended.

Reviewed by d3davies from California

Reviewed by ClavisAurea from New York

Nose: dark fruits, caramel, almost butterscotch, toffee, creamy and rich, chocolate, well integrated and balanced but still has some boozyness in there.

Taste: very chewy, toffee, dark fruits, Malt forward with some residual bitterness for balance. No hot alcohols at all but there is some booz on the tongue.

Overall: my only bottle. Need more. This is a fantastic English barleywine, not hot or solventy but the booz is still very present just not like what I'd expect from an 11% beer thats almost 2 years in the bottle.

Reviewed by Beerswag from California

Rated by Two40addict from California

Reviewed by Mightykingmalard from California

A: tan head, stays for a while. Very dark amber color. I love barleywines that are super dark. 3.75

T: only a hint of barrel in the taste, but it's awesome. Sometimes barleywines are too oaky, and this is a great barleywine with just that last good hint of wood. 4.25

Reviewed by BierJager89 from California

T: Orange, lemon, grapefruit peel up front, followed by malt, then oak, vanilla, followed by red wine and red grapes with the borbon character and a touch of cognac and brandy in the finish.

M: Medium bodied and smooth, though the alcohol is a tad harsh.

O: I really like this beer. I'd love to try the Buffalo Trace version. It's perhaps a bit flat, but I feel like the alcohol astringency offsets that a bit, and like my beer smooth.

Reviewed by James_Lockhart from Australia

Everything appeared great until it hit my tongue.

It tastes like candy floss (fairy floss). That is literally it. I would have enjoyed this when I was 5, but as my palette has matured away from sugary sweet, to savory depth; I couldn't handle this, nor could anyone else.

This is the second beer I haven't been able to finish, and that's rare.