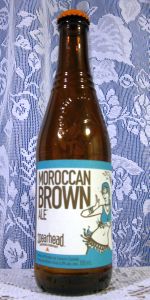 Notes: Rock the Casbah! Moroccan Brown Ale is a full-flavoured American style brown ale with a Moroccan accent. Inspired by the flavours of the Maghreb region of North-West Africa, this unique brown ale is made with dates, figs, raisins and a dash of cinnamon. It is unfiltered and naturally carbonated and has all the complex flavour and bouquet of a fine red wine with notes of plum, brown sugar and dried fruit.

473 mL Can. ABV 6%.
Appearance: Red copper, One finger of light tan fluffy head, Streaming carbonation, Clear, Good retention.
Aroma: Lightly caramelized malts, Spice.
Mouthfeel: Under medium body, Prickly, Bitter, Dry finish.
Flavour: Caramelized malts, Slight brown sugar, Slight plum.
Overall: This was a decent beer and something I might try again, though I am not going out of my way to get it.

Amber brown and completely hazy with 2 fingers of beige head.

Medium body, with a medium, slick feel, and a lot of foamy, frothy carbonation.

A nice looking brown ale with a good aroma. However I would say it doesn't meet all the standards of a good American Brown Ale in my opinion. In particular it seems to lacking any hop profile at all. I also found it a little on the sweet side for this particular style.

A bit of a miss for me as a brown ale, but still a nice enough beer.

Served on tap at the loose moose in downtown Toronto on st Paddys day.

Smell - nice aroma, subtle and malty with some earthy spiciness

Taste - good and flavourful ale, heavier in the malts and a significant amount of spice. Little bit of fig and date flavour.

Overall - a pretty good and slightly interesting take on a brown ale. Definitely worth a shot.

The folks at Spearhead Brewing were kind enough to replace the bad bottle that Bucky bought at the LCBO, so he finally had the chance to sample their Moroccan Brown Ale (“MBA”).

MBA poured an attractive light brown colour with hints of ruby/orange at the core when backlit. An aggressive pour produced about 2” of bubbly tan coloured head which gradually faded to a Swiss cheese like pattern of uneven foam which left some intermittent lacing and spotting down the glass. A date sweetness dominates the aroma with undertones of cinnamon, raisin and other dried, dark fruits. Its flavour was again dominated by sweet dates, with cinnamon, raisins, and other sweet dark fruits noticeable. The malt profile is relegated to the background. Just when the combination of flavours threatens to become a bit too sweet, there is a mild delayed-impact bitterness in the finish to restore a balance. MBA is medium bodied with a natural carbonation level to enhance the experience, and an almost powdery mouth feel. All in all, a perfectly respectable spiced ale and certainly worth a try.

Pours a beautiful, deep mahogany-copper colour, clouded with sediment and topped at first with over two fingers of frothy, off-white head. It gradually dissipates over the next five minutes, leaving behind a dense, creamy cap and a swiss-cheese pattern of lacing on the glass. The aroma is a nice mixture of brown sugar, bready malts, raisins and other dried fruits, with maybe a slight touch of cinnamon. Not exactly off-putting, but not particularly interesting given the unique ingredient list.

A respectable brown ale. The malt bill dominates, providing notes of bread crust, toasted hazelnut and caramel/brown sugar sweetness. The fruit and spice adjuncts are left to provide an auxiliary sweetness that holds fast in the background - raisin and fig are detectable, but this is not a markedly fruity-tasting beer (which may or may not be your bag - I personally am fine with it). Mild cinnamon spice in the finish, with the sweetness soon fading into a relatively dry aftertaste. Medium in body, with smooth, natural carbonation levels that provide a modest bite suitable for a light(ish) spiced ale - particularly in the context of the spicy cinnamon of the tail end of the profile.

Final Grade: 3.68, a decent B. Spearhead's Moroccan Brown Ale is a good spiced beer, although admittedly there are a few things that I think would improve it. There is a little too much residual sweetness for my liking, and very little date/fig flavour to speak of. That being said, I am mostly nitpicking - this is still a tasty beer, it's just not completely up my alley, which means I probably won't return to it frequently. Worth a look for any fan of malty/dark ales, and something I'd be interested in trying on tap.

Bottle: Poured a brown color ale with a medium size foamy head with good retention and light lacing. Aroma consists of caramelized malt with light dry fruits with some light spices including cinnamon are also noticeable. Taste is also dominated by cinnamon with some caramel malt with medium residual sugar notes and some dry fruits notes also noticeable. Body is about average with good carbonation. Interesting mix of flavours but lacking a bit fo integration to make it truly remarkable.

Poured from a 12oz bottle into a stemmed tulip glass.

T: Similar to nose; malty, some dried fruit, a pleasant spice (cinnamon?). Mild hop bitterness dries out the finish which is very clean.

O: Nice, a very easy drinking brown yet still tasty and has a certain character missing in many browns. The whole is greater than the sum of its parts.

On tap at Johnny Farina in Ottawa.

Smells intriguing. Bit of sweet corn and some brown sugar, quite slight and thin. Sweet, lacking in roasted notes a bit, but not too bad.

Taste is slightly vinous. Has a brown sugar note with some thin port, touch of cider vinegar and apple notes. Sweet; sugar with a touch of cider. Not bad.

Drinks OK; has a slight body but goes down fairly smoothly.

Maybe a bit thin as a brown ale, but drinks OK.

A - Poured a rusty red colour with a half finger light brown head that fizzled away fast. Good carbonation, no lace, no retention.

Moroccan Brown is brewed with a bunch of different ingredients but looks especially like two of them; it has a medjool date colour and cinnamon highlights. Far from light or clear but not exactly dense or hazy, the beer is a bit tough to describe. One thing for sure: it has no head.

The bouquet has a dash of spice that's tempered by dried fruits and a tinge of roasted grain. For all its 'exotic' flavourings, familiar scents of toasted pecan, molasses and coffee bean are what's noted most. It fails to really draw me in though it certainly doesn't turn me away.

Moroccan Brown Ale has a marked lack of texture - even the sweetness is surprisingly restrained - and fails to light any kind of spark on the palate. Although inspired by Maghreb (North African) cuisine, you're not likely to find anything this "clean" or neutral in a diet dominated by the likes of cumin, paprika, saffron, fresh peppermint, and coriander. This is bland by comparison.

The expressionless mouthfeel aside, the flavour is pleasant. The beer is brewed with dates, figs, raisins and cinnamon and has minor hints of all those things. More prevalent, however, is the malt which tastes of toasted nuts, brown sugar and burnt bread crust. There is also a tinge of black olive. Again, however, nothing makes a remarkable impression or lasts very long.

I've used a lot of different flavours in this review to describe what is honestly a very ordinary brown ale (which is disappointing considering all the hoopla that's gone into it). I've enjoyed Moroccan Brown every time I've had it but still struggle to think of much to recommend it by; it's probably best suited to those transitioning from mainstream lagers to bolder beers.

On tap at Bar Hop Dark Days. Spicy and sweet. I could drink this, but way too much going on.That stops drinkability, and appreciation of the fruitiness. I could sip a little, or stew some food with it.Another novelty.Too cloying, like drinking the syrup of canned fruit.

On tap at Hardrock 42 in Sudbury

Appearance: It has a nice amber/brown color to it. It has a nice off-white head that dies down moderately and leaves some lacing.

Smell: The aromas definitely give out hints of dark fruit with roasty and biscuity malts.

Taste: Like the aromas, it has some roasty malts, dark fruit (raisins), caramel and biscuits.

Drinkability: It's a very smooth drinkable beer accompanied with good flavors and aromas.

On Tap at Arrow and Loon Ottawa for 7$

Appearance - Brown colour with hints of red with an above average size foamy dark beige coloured head. It's hard to make out the level of carbonation and there is some decent lacing. The head lasted for around 4 minutes.

Taste & Mouth - There is an average amount of carbonation and I can taste malts and a hint of chocolate/vanilla. There is also some dark fruit notes with a hint of spice. It reminded me a bit of a fruit cake. It ends with malty slightly sweet aftertaste.

Overall - Another above average beer from this brewer. There was something to it that tasted a little too artificial, but it was still quite drinkable. I can see this working well as holiday/winter beer. Worth trying for sure.

Moroccan Brown Ale from Spearhead Brewing Company
Beer rating: 82 out of 100 with 59 ratings