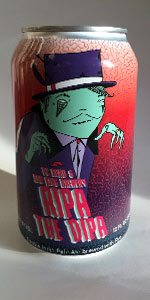 My maternal aunt & her husband have been in DC since I was a wee one & I have visited our nation's capitol almost as often as PHL & a few other world cities. As I grew older, more independent & a whole lot more anarchical, I was given greater autonomy to explore & do my own thing. I still have a place to stay, but when they are out of town, I will CouchSurf or find a local Youth Hostel with an available bunk. Such was the case as my Pens played the Caps in Game 5, which the former lost on the way to their eventual Stanley Cup victory. I awoke the following morning, checked out & hit the nearby liquor store which was just opening for the day. I know how to scour for CANQuest (tm) CANs & I was on the prowl when I spotted this mixed-six. I inquired of the proprietor if there was a limit. "Pheh! My son accepts these from the distributor while I am away! They don't move. Limit? Your credit card!" 8=O! I was stunned, but reserved myself to one for me & one for my returning in-person trader, tone77.

From the CAN: "Lurking in the shadows and peeking out from behind doors that close on their own, RIPA the DIPA sits perched alone atop his fiendish throne."; "This collaboration, a long time coming, is brewed with two types of rye and enough hops to be both ghastly and stunning."

Crack!ing open the CAN allowed RIPA the DIPA to jump out of the shadows and put a scare into me & Kelly Ripa before I could grab his legs and CANduct an inverted Glug. RIPA the DIPA was not finished with us, either, rising up to form two-plus fingers of dense, scary-looking, tawny head that hung in until I made the Sign of the Cross with my fingers. Color was a slightly hazy Deep Amber/Light Copper to Copper (SRM = > 13, < 17) & Ms. Ripa wanted to shoot RIPA the DIPA with a silver bullet, but I made her put the Coors Light back in the reefer. We have too much beer to handle as it is. The smell hit us almost instantly! Huge amounts of pine wafted off of the foul creature, as though it had been smearing itself with pine tar. As I got closer, my sensitive nose also began to detect caramel. It was going to be fun slaying this beast, lemme tellya. As I raised it up, the light revealed that it had begun to clarify, so it may have been the victim of chill haze, resulting in this brutal transformation. It was thick, heavy and viscous and tried to crush my tongue with its mighty presence as Ms. Ripa used hers to scream for help. I was no match for this bad boy & I was soon in CANtrol. The sticky residue that lined my glass in its wake was slimy and gooey & I CANsidered asking Ms. Ripa to do the dishes before she leaves. Finally, it was finished! It was hot & dry & left me gasping for air as I groped around on the floor for my inhaler, which had become lost in the melee. The Government Warning does not really do this one justice & needs to be amended to alert the CANsumer to its CANtents. Phew!

Poured a 12oz can sent by my invaluable DC brew connection into a 16oz IPA glass months after you'd think this brew would be best.
Appearance: Pours a deep amber with orange overtones; somewhat cloudy (age?). A creamy, medium white head puffs up to an inch, but falls fairly fast (age?); nice lacing.
Aroma: Citrus Juicy with the sweetness leaning towards caramel kisses. The rye doesn't jump right out unless the glass is agitated. After a a swirl, the rye-toast washes over your nose, then recedes to allow pine and pineapple to waft into a subtle dank breath.
Taste: Thick and juicy tasting with big hoppy citrus notes and a stout grainy backbone that's more than just rye. Roast is just right to bind flavors up and then let them unfurl after a gulp. Tropical fruits pithed with grapefruit come later, and the rye owns the final third. Orange comes back up my pharynx in the aftertaste.
This brew is big in the mouth. Not boozy in nose or on the tongue, but its heft is real. The oils don't stick quite enough, nor is the carbonation sufficiently robust for perfection, but the weight of it carries all the flavors beautifully It disappears surprisingly fast!
I will admit that Armageddon is one of the reasons I believe I keep working and breathing from month to month, so I'm biased in favor of DC Brau's hop-giants. But this creation is really something; and it's not because it's a beast, but because it's balanced and richly complex. No element juts out improperly. Nothing is lacking except, perhaps a few more bubbles to enliven it through a whole glass. But I had RIPA the DIPA months after it was canned, and found it to be one of the best quaffs ever... perhaps the rye was just right to have it even better after a half year of dark, cold aging, rather that fresh-poured. I'll never know. But what a memory!

Hops hops hops hops and more mops! Settle into a giant cold hoptub of hops. Notes of citrus in there. The alcohol is in the background, but it won't take long to feel in your head.

Once again, a beer provided by the reigning champion of canned beer, woodychandler. Poured from a 12 oz. can. Has a dark orange color with a 1/2 inch head. Smell is of citrus, rye. Taste is resin, rye, citrus, some malts are present, alcohol is well hidden. Feels medium/full bodied in the mouth and overall is a good quality beer.

Dark orange-amber color with a thick off-white head. The nose was orange and piney, with some spicy rye malt. Bitter taste up front with citrus, pine, caramel, and resin. Creamy but full-bodied.

Medium Amber body, sticky tan head. Rye comes through on the nose along with toasty malts and a dash of piney hops. Flavor is big on the rye and malt, some sweetness and some piney bitterness on the back end with some grassy hops. Feel is big, creamy, smooth, medium carbonation. A good DIPA, but I could use a little more of the hops.

This is a fantastic rye beer in that the rye is a key flavor, but doesn't have to carry the load alone, rather the roasted and hoppy flavors seem destined to be with it. Big citrus, hop resin, smokey and roasted grains in the base, chewable body with bold rye and hops finish. Has subtle caramel sweetness in the smell as well

Poured from a 12 oz can into a snifter.
L - Pours a dark orange with a a white head that dissipates quickly. Little to no lacing.
S - Smells of citrus.
T - Tastes citrusy with some malty sweetness.
F - feels a little thick with very slight carbonation.
O - Decent double IPA

Beer number 400 for me. Poured into my teku, Amber color with about 1 finger head. Aroma is candy, bubble gum. The hops and malt were balanced and getting the rye flavor but what really stands out on this beer is the mouthful so smooth and very drinkable. I enjoyed this one.

Wow, based solely on this and their Devils Backbone collaboration, I am totally sold on Sun King. To see guys know how to pack a ton of flavor into a beer. This a gorgeous brown, hazy DIPA with plenty of lasting head, and the hops and rye really stand out.

Despite the rye, the sour bready flavors that I normally associate with rye beers don't really come out much. What I do get are some fruity, floral flavors that include apricot, strawberry, tamarind, and baobab fruit. Hops also presented nice citrusy quality but it's mellow and not aggressive. The taste is fruity, but not tooo sweet and there is there pleasant, medium bitter finish.

I love the idea of a collaboration sampler pack has an anniversary idea, and this beer was a great addition to it.

T-taste is similar to the smell with a caramel malt backbone, citrus, tropical fruits, and pine

Poured from the can into a Spiegelau IPA glass.

Deep mix of dark orange and amber red body color, fairly clear and transparent to see lots of small carbonation rising slowly through the body. Head cration is simple, slightly larger than two fingers tall and a bit creamy with a hint of soapy appearances. Has decent retention and settling down to a finger.

Palate goes into a more simpler tone. Slight tingly and tight mouthfeel, with some good malt depth and almost toasty caramel. Lingering pine aromatics on the swallow, and a faint berry candy like finish but with more astringency than sweetness. Slight sensing bit of malt sugar flavor, some noticeable spicy tones from the rye that are just a touch distracting, but not too bad.

A pretty unique and special aroma on this one, but goes for simplicity on the flavor.