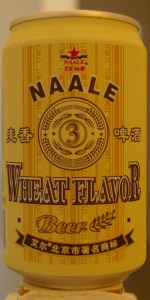 3.79/5  rDev 0%
look: 4 | smell: 3.75 | taste: 3.75 | feel: 4 | overall: 3.75
This beer came to me courtesy of einweizenbitte from one of his overseas junkets. I put it in the reefer meaning to add it, but since adding requires a review, I did not want to Crack it open without a viable picture. It then fell to me to get a good camera and once I did, other beers somehow took precedence until today. My humble apologies.

The Crack in this case was actually a Pop! as in a pop-top and I got that spritz that used to be the trademark of such openings. It was nostalgic in its own way. I began with an inverted Glug until the foaming head became too much to CANtrol. It slowly settled, producing two-plus fingers of dense, puffy, bone-white head with good retention. It looks like a cloud had descended upon my beer. Color was a pale sunshine yellow with NE-quality clarity. SRM = 2 - 3. Nose was odd, kind of fruity in a bubblegum way, like Juicyfruit. Was it really a wheat beer, instead of simply "Wheat Flavor" as identified on the CAN? Mouthfeel was very effervescent, almost like soda pop, and the taste was very mild with a light taste of wheat on the tongue. It was not full-on Wheaties, but it did taste of wheat. The finish had a light blueberry sweetness to accompany the wheat flavor. This was a strange little beer and I hope that someone else CAN score one so that I CAN compare reviews.