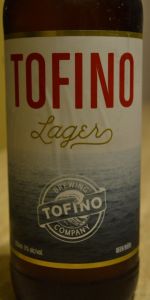 Taste - Starts off with the saaz hops followed by the grassy malts and hay aromas. The apple comes through in the end.

Overall - A crisp and refresing pilsner. I was hoping that the saaz hops would have shined through a little more but nonetheless a sessionable beer.


Tofino Lager from Tofino Brewing Company
Beer rating: 3.52 out of 5 with 4 ratings