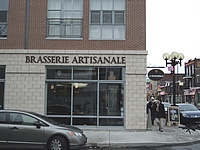 Hi,
La Succursale have very good beer and selection. The vibe of the place it's kind of calm, family friendly
so it's nice to go there and chat. I didnt try the food, but the nachos looked very yummy ! Gonna try them the next time i will visit.

Really nice little place with a decent selection of beers and a nice atmosphere. I happened upon it by accident and decided to try a pint. The bar is nice and big but there are a lot of tables which were almost all ful of conversating people just off work when I was there.
There is a fairly wide variety of their beers on tap (style-wise, that is). Pales, German Lagers, an IPA, a couple English ones (with a beer engine), etc. They also do private importation and when I was there had one by Brasserie des Rocs and four beers by Evil Twin in bottles.
There is food as well (snack food) but I didn't try any. The atmosphere is very nice and inviting with low lights, and woodsy coloring. The prices were neither super cheap nor expensive. A pint was about $6.
I would go there again if I was in Rosemount more freuently. They may not have beers to put your dick in the dirt, but it is a nice little place and what was there seemed solid. Nice spot for people who live nearby. It is a long ways from me though...
Worth a shot if you're nearby.

Came here for a quick beer after a trade with hoppypocket and i'm glad i did. Lots of windows that roll open horizontally makes for an inviting place with light and a nice breeze. Service was real attentive with bar keeps actually going to the tables to take orders and take back empty glasses. Prices were very reasonable and selection was pretty good. Had at least 2 guest beers that i could see (Charlevoix & Trois Mousquetaires). The place was very laid back and the crowd was a mix of young and old. Definitely one to watch for in the years to come.

New brewpub on the Montreal scene.

Bottom line first: Not bad but not great. It's average, in the literal sense of the word.

The few times I went there, the atmosphere was good but not great. I don't understand some of their design choice that make the place a bit too aseptic. It could have more personality.

Beers are good but nothing new. They get thumbs up for clean, balanced and well-executed beers. But thumbs down for creativity and personality. They have perfectly achieved 5-6 styles but it's just great executions of known beer styles. Nothing to get people talking about this place.

They usually have 4 of their beers on tap with a few invites. The latter saves a bit the Selection note. If you want something strong or with a bit more personality, goes for the invites.

Their biggest flaw is the service. The guy that was being the bar the two times I went there was awful. I think he is one of the owner but it feels like he doesn't want to be there. Waiters/Waitresses feel like they are doing this for the first time. Not comfortable and not really that friendly with the clients.

I'll let them get their stuff together since I guess it's always a bit hard in the beginning. I'll go there again because it close to my place. But located that far from the center of town, I fear they will need to boost up their game if they want to survive longer.