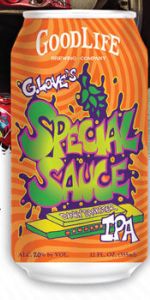 After a huge frothy head pour..settles down to a traditional looking orange coloured body with a large rocky/frothy off white head.

This is advertised as a dank IPA..and it certainly is in the nose..old style PNW to the fore!

Taste the same ultra dank..sometimes to much bitter dankness in one sip..some slight aspects of blood red oranges in the back,

Mouth feel is moderate to low with low carbonation and a hellacious long lasing dank bitterness in the end.

Even as a fan of trad IPAs..this was a bit much

Possibly the most stoner looking label I've ever seen. Also, it oddly has my initials, in a heart, next to "Goodlife Brewing".

Anyways, pours a finger of white head into my tulip glass. I can hear it fizzing, and retention ultimately turned out average, or maybe a touch below that. Has left some good initial lacing. Body is a dark burnt orange, with hues of brown. Visibility is very low, and maybe looks a little cloudy even. Overall it looks ok so far, darker than your average IPA.

The nose is on the juicier side. A little sweet. Hops are a little dank, but more zesty than anything. Hops smell almost like trub, that's how potent and tangy they are. I'd say spicy, because it has that effect on the nose, but it's definitely a different aroma than that. I can't say this is the most well rounded hop profile I've ever smelled, but it's very full and unique. Good nose, I think.

The flavor is a little off. Not really sure where to start here. Hops don't really carry any flavor through to the palate, only bitterness. Small lingering astringent bitterness/alcohol presence in the background. Sweetness isn't huge, but seems on the unwanted end. Not terrible, but not a very enjoyable beer to be honest. It's really just a combo and poor malt sweetness (too dark of a malt bill perhaps?), rough bitterness, and small but noticeable amounts of alcohol.

Has kinda a rough mouthfeel, with a small booze bite. Again, the burn here almost reminds me of drinking trub (an experience I have certainly had). Carbonation is about medium, maybe a touch higher. Body is pretty thick. Overall not a very good mouthfeel considering the bitterness and booze not only affecting the flavor, but feel as well.

The drinkability is quite low, it doesn't taste that great, and the alcohol presence doesn't help.

The appearance turned out pretty meh. Lacing is barely there. The initial appearance was ok I guess, but the darker appearance certainly supports this less than perfect malt bill. I like crisp IPA's with light malt bills, this is anything but.

Overall not a very good beer. I can drink it, but there are a handful of reasons not to.

Handsome yellow brew with plenty of foam in the Wander Brewing snifter. Substantial malty body. Moderately sweet at first sip but dry finish. Aroma of pine with some lemonade and orange notes. Quite bitter.

Fruity but the juniper and pine taste takes over. I guess you'd call it dank though not as woody as some of these hop monsters. The overly bitter aftertaste keeps this from being much of a pleasure. I'm looking for that anemic Oktoberfest to dilute it with. From the 12 oz can purchased at Pioneer Market in La Conner, Wash.

A clear orange with a dense white head with good retention and lacing this looks great. Despite the name, this doesn't smell dank. Candied orange, some caramel, a little pine and some sweetness are present on the nose.

The palate opens with a blend of caramel sweetness and pine bitterness, along with flavors of candied orange peel, toast, a little bit of grain and some stale dough. A touch bready on the mid palate before a bitter and mildly sweet finish. Honey, candied orange are all present. Solid stuff.