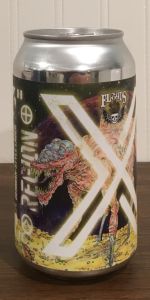 Notes: A smooth and crisp German-style lager. Lightly hopped with traditional noble hops and brewed slightly stronger than other light-colored lagers to help us get through the cool spring nights around The Region.
View: Beers | Place Reviews
Reviews: 10 | Ratings: 34 | Log in to view all ratings and sort

16oz undated can poured into a tulip pint glass at just above fridge temp, no ABV listed on label. This is a first quarter 2020 release for 3F so it's fairly fresh. The beer pours bright gold in color with sticky off white head. The head recedes to a thin layer of bubbles and leaves plenty of lacing. The aroma is pale malt, light lager yeast and barely there floral hops. The taste is pale malt first with earthy, floral flavors coming out in the middle before a mild to moderate final bitterness. The mouthfeel is medium to thin bodied with average carbonation and a dry finish. Overall, very good. This is very close to style (a bit hoppy / bitter) to my taste. Very pleasant and enjoyable lager.

Getting back to our brewing roots, the brewers at 3 Floyds turn their attention to the Duntmunder styled lager from Germany. With a light hopping rate and a minerally crispness, they show that they are much more than a brewery of hop bombs.

Pouring a pale gold, slightly hazy appearance, the well capped lager greets the nose with an abundance of floral, grassy and grainy scents. Its bready sweet upstart is light with honey, fresh baked bread and the pilsner-esque character of lightly kilned grain.

As the malt flavors gently stew on the middle palate, the floral hops turn slightly grassy and herbal with the strong assertion of lemongrass, straw and fresh grass clipping highlighting the way. Gentle flavors of lemon and apple carry a mild mannered sulfur character into the late palate where a sharp, grassy and peppery taste of lemon pepper, parsley and light mint await.

Medium bodied for lager but light in its character overall, the elevated hop character of Region X is more pronounced than is standard for the style and its slight mineral brine is quite hidden. Non descript in its highly Germanic taste, 3 Floyds show that they can't get away from their own hoppy roots after all.

Pours a beautiful golden color with an off-white head, there are noble hop aromas and loads of bready malt notes.

The bready malt notes are dominant on the taste as well, but the noble hop flavors keep things well in check. This is a really nice example of the style, and a beer I’d drink regularly if it was in the Three Floyd’s rotation.

Sweet, bready aroma with a little sulfur beneath.

The taste follows closely. The sweetness is more doughy than anything, although there is a little minty-lemony note. More of the sulfur and mild bitterness is for balance, giving an almost stoney, mineral-like finish.

A very well-made lager. Appropriate to style, it has a little more heft than quaffability.

Tasted in a Spiegelau lager glass from a one pint can on March 6, 2020. Looks and tastes like a typical export lager minus the green bottle and skunky aroma.

This is an exceptional example of a german lager. Noble hops balance perfectly with a clean crisp malt backbone. I could drink this all day long. Exceptional beer from a great brewery.

O: A wonderful brew, damn near a cross with a mead, but I liked it. Holds up extremely well. I checked the canned date afterward and nearly fainted, 6/21/19!

Aroma is really subdued - just some light grain notes, hints of white bread. Not much else going on there.

Light, crisp, drinkable, with a bone dry finish. SO much so that the flavors just kind of die right off the palate. Crisp prickly carbonation.

Overall a nice drinkable lager from FFF. Not a great example of the style, but on its own merits its a nice beer Id happily grab again.

The pillowy, full body is light in flavor with your typical lager notes, which is surprising for FFF. Nothing overboard, with lightly bready, floral and herbal characteristics.