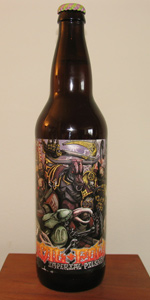 One thing we all know too well is that all beers are not alike, and another thing is that even a favorite brewery is capable of disappointing. I've never had a Three Floyds beer I didn't like before last night. And also, I'm rarely thrilled with "double pilsners" or "imperial pilsners." Perhaps these two facts will conspire to either prove one right or the other wrong? Let's look at yesterday's notes of Three Floyds' "Evil Power", to find out.
Chicago Beer #8.

Hazed, golden hue, slim head…whatchagonna do? But, not bad for an I.P.

Taste: Here we go, there it is, now it's happening. Crisp, clean, clear, all those words come roaring back, basic cereal grain from the malt, …light bodied, lean mouthfeel, good drinkability. But, hey, where's the Imperial? Boom, boom, boom, boom….

Wonder what the label will tell us? "A fortified European style pilsner lagered to perfection, brewed with heavy metal warriors Lair of the Minotaur. in commemoration of their 4th full-length release "Evil Power." Available now @ …blah, blah, blah/...skol prost cheers."

Hey, Three Floyds, do something shocking, change the game, turn some heads…make a collaborative beer with a smooth jazz flute ensemble to commemorate their latest tribute to Herbie Mann. Or something. This whole sturm und drang is just kind of…I don't know, your thing, I guess, so who am I to complain. It's just a touch tiresome. Someone has to lay off of the dungeons and dragons and Conan the Barbarian comic books. Looking straight at you guys.

So, back to the beer. It is what it is. Basic pilsner bulked up to …I don't know, once again I find a bomber with government warnings on the label, but not a note about the ABV. (7.2 %, says BeerAdvocate.)Well, it's Imperial and it's starting to bang on my brain, but it's pretty simple as a pilsner. I knew that going in, so there's really no room for complaint. I'm just an idiot ticker, when it's all said and done. I do like every Three Floyds beer I try, and this beer is what it is, it just doesn't have any extra delights. A heavy metal band wants to make a strong lager, big surprise there.

Poured cold into a pilsener glass. Date says 8/27/20154 - no idea what that means. I think it’s fresh, just bought it last week at the brewery.
Look = 4.25 Poured a clear golden copper color, darker than you’d expect from a pilsener, more like an IPA in color. Three fingers of frothy, crisp white head. Good retention and decent lace. Overall a pretty beer.
Aroma = 4.0 The pale pilsener malt is most prominent but it’s accented nicely with some crisp lemon lime citrus notes. Grew on me as the drink progressed.
Taste = 3.5 Malt forward, sweet toffee pilsener taste. There is some citrus lemon notes on the backend. Only slightly bitter.
Feel = 3.75 Light bodied with low to moderate carbonation. Light and refreshing but a little flat for a pilsener.
Drinkability = 4.25 Pretty crisp and refreshing for an imperial, smooth drinking.
Overall = 3.85 Really solid look and aroma but the taste and feel left a little to be desired. Still, a really good pilsener style beer.