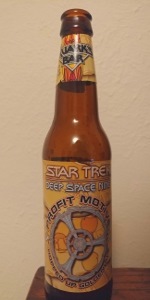 Poured from a brown 12 oz. bottle. Has a very dark golden color with a 1/2 inch head. Smell is of biscuit malts. Taste is biscuit malts, plenty of hops, a bit of pine, very easy drinking. Feels medium bodied in the mouth and overall is an enjoyable beer.

Notes via stream of consciousness: It appears, based on the sediment at the base of the bottle, that this is bottle conditioned, and it's a hazy golden amber in color. The short head was white while it was there, but it dropped quickly and now it's just a thin surface covering and standard collar. The aroma is hoppy, I wasn't quite expecting that, although I'm not sure why. I guess because it's a Star Trek beer, although I should have clearly noticed it says "hopped up golden ale on the label". It's piney, a little peachy and apricot-like, with maybe a touch of orange and melon. It's not the brightest aroma, but hell, it's pretty damned good for being an APA - I've had IPAs with less hop aroma. On to the flavor, it's even more piney there. That's a little unusual. It's not unheard of but it seems like every brewer wants to be all tropical-citrus fruity these days. I like it, it's not overdone, and there is still some stone fruit and a hint of tropical fruit to it. It's pretty malty as well. I hadn't thought about it until just now, but I might have expected something like this to be a little lighter on the malt, which is grainy, bready, and biscuity. It's got a nice balance with lightly sweetish malt threaded through with piney and fruity hops leading to a rising median bitterness and then dry finish with a little bit of fruit, pine, and mostly herbs lingering. In the mouth it's medium bodied with a dextrinous feel, and gently crisp. It probably could have used a bit more carbonation but that's just my personal opinion. It certainly would have helped with the head retention and lacing, of which there was none. Still in all, it's a pretty decent, hoppy enough golden ale. Nothing to write home about, but solid. However, and I don't normally mention price because it doesn't really have anything to do with the taste of the beer, this is a bit pricey, I'm assuming because of the Star Trek name. Personally I'm not sure that I've ever seen an episode of "Deep Space Nine" so that doesn't mean anything to me. I could find a lot of similar hoppy blonde ales for about half the price - just noting that.

L: Pours an apple juice color with a light head.

S: Off the bat are pungent aromas of stone fruit and hop aromas.

T: Taste is a strong fruit kick along with the hops and malts. This style is called a "hopped up golden ale", so the hop characteristics really come out.