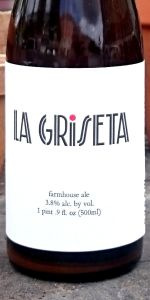 On tap at Oxbow in Portland. Served in a taster. Slightly hazy golden body. Small white head. I smell tart blueberries first. Oak. A bit of rum and acidity. A little bit of doughy malts. It’s lightly tart. Faint berry flavor that loses its blueberry distinction. Strong yeast. Oak, rum, and acidity linger. Medium body. Well carbonated. A total departure from the simplicity of their other beers, but everything works really well.

Tasting glass on tap at the tasting room in Portland, Maine.

Aroma: Blueberries! Smells like tart blueberry and some jam. The rum aromas from the barrels are also there. Brewer says this beer was aged in blueberry mead barrels that had previously been rum barrels. This beer smells funky and jammy and pretty inviting.

Taste: Follows the nose. Funk and blueberries up front. Little rum burn, too.

Overall: Fun little number from Oxbow, which is great with saison-style beers.