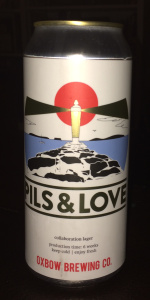 This beer brings some deft and subtle flavors and mouthfeel to the beer game. Wonderfully balanced with some tasty complexity and depth to please the palate and soul.

Crystal clear, pale golden yellow appearance. The body was topped by a fluffy, inch-tall, bone white crown that quickly fell to a thin, lasting film and a bubbly collar. Craggily rings of lacing stuck along the glass, but they soon broke apart into small odd shaped patches.

The flavor was more bitter than I anticipated. Leafy hop notes dominated. Tangy and lemony on the front end. Hint of biscuity malts. Touch of sulfur in the center. The hoppy bitterness really intensified as the beer moved along the palate. Super crisp and dry on the finish with a lingering earthiness.

Oxbow’s Love & Pils was definitely more bitter and one-dimensional than I anticipated. Despite the surprisingly high scores and the ridiculously long lineup of collaborators on this beer, I was not impressed.

16oz. can served in my Spiegelau pilsner glass. Pours a pale, translucent gold with a rocky, two inch, bright white head. Pleasant nose - light and grassy with a hint of lemon. Taste somewhat consistent with nose; however, it comes off a little watery and finishes with a slight herbal/medicinal bitterness. Mouthfeel is light in body with a smooth, even carbonation and a kiss of astringency at the back. All and all, a decent Pils that wold probably pair well with pizza or BBQ.