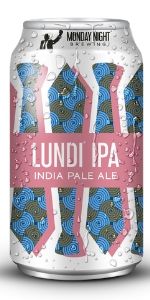 Notes: Lundi is a remarkably smooth and approachable IPA. This dangerously drinkable 7.1% ABV crusher, Lundi abounds with citrus and pine notes thanks to Mosiac, Simcoe and El Dorado hops.

Soft, fruity and slightly hazy, this is one you'll want to have handy for a night hanging with tes amis (that's French for your friends).

This pours a hazy (what the kids used to call “unfiltered” in the beer nerd world) golden straw color with. White head that laces the glass nicely. The nose is some citrus and what for the life of me smells like mint. Hmmmm.

The taste citrus forward (tangerine and mango), and there’s a berry flavor I’d credit to the Mosaic hops. I’m still getting a subtle minty flavor as well, but it works.

The mouthfeel is in the softer side, and the beer is suitably juicy, but I’m not sure where the “Elegant” referenced on the can comes in, but this is pretty tasty and worthy of a “fridge IPA” distinction, IMHO.

Citrus and forest feel to it. Cloudy on it’s approach, seems wrong for this. Nice bitterness with good carbonation which seems to cut the bitter.

I do like most of what Monday Night produces. Working through their entire product lineup

Just over two months old, but obviously that's fair game for an accurate review, as the brewer advertises a SIX MONTH BEST BY WINDOW for this IPA. Challenge accepted (I'm tempted to save a can into late January and re-review it ... you know, for science).

Soft, juicy, and berry-forward nose. It's a rather interesting hop presentation, with the El Dorado taking lead. Even balance between citrus and tropical fruit, fairly undefined and muddled. I'd say if it smells like anything specific, it's reminiscent of one of those fruit mixers, in this case grapefruit juice, berries, and mango. There's some pine lurking in the background, and some bright herbs for accent.

Nice and juicy up front, alongside some pine - until suddenly there's a wave of juice similar to the nose, crashing over the palate as though it had been held in reserve until the trap had been sprung. It's really unique, not exactly like any other IPA profile I've had before - but not necessarily worlds better, either. Fairly low bitterness for an IPA.

A touch slick on the palate; lively.

OK, on the age of the beer: this is absolutely fine. There is definitely a hint of caramel-like staleness - just the barest hint, but one that threatens to worsen if you allow the beer to warm enough. Six months is still ridiculous, Monday Night. If you're going to put that on your packaging, you should darn well advertise the born-on date right beside it (which is the case for the individual cans, but not for the outer packaging).

Pours a hazy golden color and sports a big fluffy white head which is bound to leave plenty of sheet lace.

Aroma is mash up tropical fruits with a light floral backing along with some citrus more bitter hops thrown in to give it a little punch. Malt base in more bread like.

Taste is kind of a mixture too floral and tropical fruit sweet goodness with slight kicker of grapefruit rind bitterness in the finish. Personally could of used more bitterness the way it is on my taste buds its not fruity and juicy enough for a hazy and not bitter enough for some of the hazy IPA's that go for a good bitter finish. Think they are shooting for the middle of the road and defiantly hit that mark, just not interesting enough for me to want to have again.

Overall kind of an in between IPA , try it you might like it. personally just not excised enough about it to repurchase.

Pretty solid beer. Enjoyed it for the most part but not as great as I was hoping. The smell is hoppier than the taste which evens it out but still pretty mild.

Yellow unfiltered looking pour. Very nice citrus and bready scent. Tastes is more wheat and malt than I was expecting. Feels smooth with that thick bread and wheat feeling. Overall this is just a much different experience than what I was expecting. Falls a little flat for me so I can’t recommend a repurchase.

Appearance: With a look about it of a medium-toned yellow hue with an equally medium degree of haziness. Slim, coating, white head. Great lacing.

Smell: Citrus, floral with tones of g-fruit and Valencia oranges and a mild, white bread breadiness beneath.

Overall: Smooth, easy drinking, for the most part.

Lundi from Monday Night Brewing
Beer rating: 86 out of 100 with 23 ratings