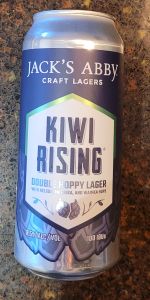 Notes: This is an intensely hoppy and strong lager that we refer to as a Double India Pale Lager. Over four pounds of hops per BBL of New Zealand hops (Kiwi Hops) were used in progressively larger hop additions throughout the brewing process. Four kettle hop additions, whole leaf hops in the hop back, and multiple dry hop additions infuse an intense floral and citrusy aroma. No kiwifruit or kiwi birds were used in the production of this beer.

Canned 12.02.20. Slightly cloudy gold on the pour with slight, disappearing head and almost no lace. Aroma is hoppy resin and melon. Taste is interesting; starts aggressively hoppy, with a peppery spice middle, and finish stays bitter with lingering resins and tropical fruit hops. Mouthfeel is crisp and creamy, and 8.5% ABV comes on as it warms. This beer is heaven for hop-heads, which I am not. This is a well-crafted brew, but I prefer something slightly smoother and fruitier.

Pours clear, gold in color with 1/4 inch head. Taste is floral and wet hops, melon with a good does of peppery spice. High carbonation, slightly biter with moderate carbonation. A lot spicier than I thought it would be. Very clean like most Jack's beers. That said I do prefer some of their other ipas. I am fine with just the one.

This IPL - or Double IPL as the brewery calls it - is incredible. The Nelson and Motueka hops are presented without the distractions that often turn muddy in a NEIPA, and the result is magnificent. Pure hop flavor with no distractions - all the flavor of the best NEIPAs in a package that brings out the best in the hops.

The look, smell, and feel of the beer are all good, but not exceptional. The flavor, though - wow. Just remarkable concentration of hops. As punchy a hop flavor as any beer I've had, including plenty that cost twice as much.

Buy this beer if you see it. You will not regret it.

I hopped this would convince me lagers were tasty. Not. There's a nice hoppy aroma but the pilsner, yeasty carbonation invariably comes across as stale. Have to finish a 4-pack, and maybe will edit this review if the second taste is a charm. Stick with Sierra N. Hoppy Lager.

16oz can into a pint glass. lengthy code on the bottom is difficult to figure out, but may indicate this beer is over a year old.

Kind of a floral, perfume-like aroma, with mild citrus notes

Lightly bitter, some citrus. One of those drinks that gets better the more you drink it.

Overall, if it is indeed over a year old, this is still a pretty tasty beer. A fair amount going on, and as mentioned above, is more pleasing a the drink goes on.

Pours a hazy golden color with a nice white head. Smell is citrus, tropical fruit, and resin. Taste starts with citrus, then gets quite resinous with some savory or spicy notes that border on scallion. Nicely balanced light bitterness, without too much sweetness. The hops here are packing a lot of flavor, and definitely different from many hoppy beers I've tried. I like this one a lot.

Tried this at Eli Cannon's in Middletown, CT. Came in a pint glass with a little bit of head and hardly any lacing. Aroma is resinous and citrus peel forward. The taste is very citrus forward and very refreshing. Nice dipa.

Incredibly golden hazy look, very rich looking. Smell is a little dull compared to the taste, but its still strong with kiwi, orange, melon, and all the wonderful hops. Taste punches you in the mouth with hops and lupulin, then bleeds into a little sweetness to make your tongue happy, and then it slowly crisps out and is a wonderfully dry finish. Feel is bright and smooth and the perfect IPA mouthfeel. Amazing beer!

A: Small Soapy white head that dissipates to a film. The body is a bright orange, gold body with fairly good clarity, but some slight haziness.

S: lots of tangerine and grapefruit. Not getting much else from the nose.

T: lots of tangerine and grapefruit fairly sweet body with hints of the alcohol on the finish. This is very juicy and has a nice lingering bitterness.

O: This is a great beer, super orange and tangerine forward, might be a touch sweet both otherwise quite good.

16 oz can into Sam Adams glass. Dated 9/24/18.
Look is cloudy golden yellow. Smell is citrus. Taste follows and ends with nice grapefruit bite. Feel is medium. Overall great IPL that I get every time is is around.

Big thanks to HighLowJack for sending this one. Reviewed from (long-standing) notes. Poured from a 16 oz. can, which proudly proclaims "NO KIWI FRUIT", into an El Catador Barrel-Aged glass.

A: Bright gold and just mildly hazy, with a two-finger white white head with moderate retention and a fair amount of small bubble visible carbonation.

O: A solid beer, just not my favorite hop flavors. Spicy and melon are too much rather than the more juicy-forward varietals. But still really well put-together.

Excellent beer that sets itself away from the other lagers. Taste is smooth - floral citrusy some may compare taste to that of an IPA. Feel & look draws this solid lager to the front of the line.

Poured from a can dated 10/23/17 into the test glass
A - Sunflower yellow backdrop, active carbonation tops aout in a fine white cap
S - Sweet malt, then a trip to the tropics, lots of pineapple, some peach skin as well
T - Follows the nose well, excellent malt base, matched with fruit
M - Heavy as lagers go, a bit oily excellent carbonation, with a pleasant dry finish
O - A big hoppy IPL lives up to the billing.

16oz can, pours a thin golden haze with medium body. Floral and bright up front, but then almost immediately metallic and bitter. I've enjoyed it fresh on tap before, so maybe not a can-friendly brew.

A big thanks to the commander of the canquest, woodychandler, for this beer. Poured from a 16 oz. can. Has a rich golden color with a 1/2 inch head. Smell is floral, citrus, malts. Taste is citrus, herbal, some malts, a bit of alcohol is present. Feels full bodied in the mouth and overall is among the hoppiest lagers I have tried.

Pours a very cloudy yellow gold with thick head and sticky lacing. Nose is a blast of hops, some citrus, and floral. This sucker is a beautiful hoppy beer, mixed with a soft citrus and sweet floral undertone gives this one a great drinkability and keeps you wanting more. I could not put this beer down, it was that tasty. Fantastic stuff.

13 oz. on draft in a snifterish thing at Hella Good in Portland.

Appearance: Pours a hazy, bright yellow with a ring of sturdy white foam.

Taste: Even fruitier on the palate. Those pineapple and grapefruit notes are there. Very hoppy. Tastes more like an IPA than an IPL to me, but also sort of reminds me of a super-hopped version of their Hoponius Union.

Mouthfeel: Very drinkable at 8.5. That might be the best evidence of lager-like quality.

Interesting stuff. Pours hazy golden with lasting white cap that fades to a millimeter, clingy. Aroma is tropical with a tiny funk, slight pine. Flavor is similar and tasty with a mid-sip blast of juice and bitter, but never too bitter. Very smooth and easy drinking . Jack's definitely knows IPLs.

L — Pours a very slightly hazed pale golden body with a three-finger eggshell white head produced with moderately aerated pour. Great retention and decent lacing. The head is really nice on this one; it looks like a merengue.
S — Grapefruit, pineapple, orange, peach, cream, chalk, floral, pilsner malts, and a touch of new sneaker smell. Reminds me a lot of Julius, surprisingly enough
T — At this freshness, still quite green and hot. Starts with a wave of grassy herabecousness that is rounded about by the soft honey-bready malt character. This initial assault is tempered by a rich citrus zestiness that continues to the finish, alongside yeasty bite and bubblegum. Also I know that there isn’t any actual kiwi added to the mash, but I swear I’m getting a hint of some
F — Nice, soft mouthfeel, especially given the ABV. Higher bitterness than expected (but definitely doesn’t taste like the 105 IBUs that it is). still restrained enough and smooth drinking. Medium+ carb.
O — An excellent ‘updated’ version of Mass Rising, another one of my favorite Jack’s Abby offerings. The bitterness — some of which I think was caused by the yeast character — could be scaled back a notch, but overall great stuff.

This was poured into a pilsener glass. The appearance was a slight hazy burnt yellow to golden orange color with a one finger white foamy head that dissipated in a messy fashion. Lacing speckled in a messy fashion. The smell had a charming sweet to bitter juicy grassy to citrus blend sliding into an underscore of floral bitterness. Hop oils start to come out as it warms. Really nice! The taste followed the smell nicely. Low dry floral to citrusy aspects burst into the aftertaste and slide into the finish. On the palate, this one sat about a light to medium on the body with a nice sessionable feel as to not wreck the palate. Carbonation seems good for a lager style - enough smoothness but also enough IBU harshness hitting my tongue. Overall, I’ve wanted this for a long time and am so glad I finally found it. One of the best IPL’s, I’ve ever had and would recommend with its respected food.

A: Poured from the half-growler into a Duvel tulip. Body is slightly hazy golden-honey with a small, thin film of grey-ish head.

S: Not a terribly strong nose - some tropical fruits, some ripe melon, some leafy greens.

M: Medium in heft, with a slight slickness to the feel.

O: Good, but not awe-inspiring.

Smells floral with a hint of orange, pours a gorgeous hazy orange hue.
Taste is dangerously drinkable. I get the citrus right off the bat, ending very smooth. With a slight pleasant bitterness that lingers. Kudos to Jacks Abby, This is an excellent example of an IPL.