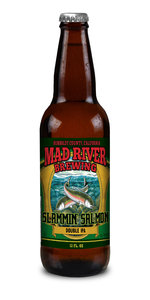 The story starts with the fact that I haven’t really had an IPA for quite some time now. I am telling you this because for the last five years, I had nothing BUT IPAs - and I’m not really exaggerating here, check my beer history in BA if you don’t believe me. But in the last year and half, partly due to the scarcity of imported beers from the US here in Japan, I’ve been having less and less of them.
Even this Mad River, I’ve had this for quite some time now and been keeping it for “the right moment” to open it - and for some reason I thought tonight was one. What I managed to find out was the brewery bejng from NorCal, almost near to the Oregon border, made me think of Lost Coast and even Anderson Valley that I used to like so much back in the day. I expected this beer to be in the vein of those, big nature, Yosemite, Sierra beers. But I was wrong.
The beer looked amazing and the aroma just fantastic. Very hard to pinpoint it but I would say pine and earth were its dominant aspects. And when I took a sip...
Man, this beer took me back. Took me back down South, to be honest. It did not taste anything like those beers from NorCal. It tasted very SoCal, what’s even more, very San Diego, and even more, almost down there by the border. Very much like the Desert Southwest. I think it was very similar to the Citracado IPA made by Stone for their Anniversary, made with Avocado flower honey. So I hope you got the picture: amazingly piney, earthy and resinous and full of excitement. The aroma has been very intense all the way and it brought back all those memories from a few years ago.
For me this beer was like a time travel. Back to the “good old days” and was also an eye opener - no matter if I can’t get all the beers I want right now, there will always be a time to do it again. Because those beers welcome you back all the time and they can give you back that same old, great feeling.
What a beer!

From old, undated notes. Poured from the bottle. This was called "Steelhead Double IPA" when I had it.

White head; a curtain of lace.

Smells of malts, with little citrus and pine.

The taste is sweet and malty, with a little citrus, and very little pine.

Also known as "Steelhead D/IIPA"...purchased a 12oz bottle from WOB...no date on the bottle so in my opinion, by the "barleywine-esqe" taste, it was past 120 days (IMHO the drop-dead date for freshness date for an D/IIPA). Now that being said, if it were labeled as an barleywine, my ratings would be much higher if it were, however, as labeled...I'll leave it as is.

Taste, big beer, one of the bigger ones still available in 6 pack format. There is a bunch of crystal malt here. Hops aren't taking back seat either, mostly of the C hop variety I surmise. Its a little bit sticky and thick. Alcohol is there, but not pronounced. Good format, worthy beer.

Deep orange,amber color. Head was thin, & dissipated quickly. Not much lacing. Aroma is sweet malt, orange, and bread. Flavor is malty, with a bit of citrus and pine. Resinous mouthfeel and smooth finish. Excellent beer overall

Hazy amber orange color with a fluffy beige head with medium retention.
Aroma with notes of piney resin, caramel malt, grapefruit and oranges.
Flavor with notes of grapefruit, tangerine, toasted malts, lots of resin, pine, mango, wheat and caramel malts, cantaloupe melon and apricot. Long dry and bitter aftertaste. Despite its 95 IBUs it is rather rounded.
Medium body with appropriate carbonation. Alcohol of 8.6% is well hidden.
Solid DIPA full of smooth citrusy and resiny hops. Not very complex, but not shallow. I liked the fact that is not a heavy DIPA with the usual sin to be overly sweet. I feel I could have a few, though at 8.6% abv, it could have got me in trouble. It lacked aroma, not sure how young is this exemplar.