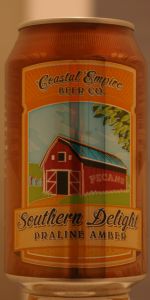 Notes: Our Praline Amber Ale is brewed with a generous addition of Georgia Pecans and Madagascar vanilla. We also add lactose to accentuate the natural caramel flavors from the malt. These additions combine to produce a flavor reminiscent of a traditional Southern candy, the praline.
View: Beers | Place Reviews
Reviews: 12 | Ratings: 41 | Log in to view all ratings and sort

Thanks to Roguer for this one from NBS BIF #10. 12oz can poured into 14oz teku. poured a lightly cloudy medium-dark brown color with 1-1/2 inches of tan head that had good retention but very light lacing.

Nice base malts in the scent, with just a hint of vanilla.

Pretty similar on the tongue, not really picking up any pecan.

The body was on the lighter side of average for the style, smooth, and had a medium-sweet finish.

Drinkability was fine, finished my can with no issues, but not sure I would seek out another.

Overall, a solid and enjoyable brew, just not a particularly notable one.

Vanilla quickly becomes apparent on the palate, but it's neither sweet nor rich. Instead, it's a lively, moderately bitter (for the style), grainy brew. Lots of caramel grain, with a brown sugary finish. Extremely lively, with plenty of sting up front.

I don't get "praline" from this, and while the pecan and vanilla both contribute to the overall profile, it might not be in the way you expect. It is, however, very tasty and enjoyable. Easily worth ordering on tap, and a contender for occasional purchases for at-home consumption.

Malty, sweet, malty...smooth and easy drinking Amber....worth a try and would work in a chicken, or pork marinade

Nothing overly special going on here..decent

Poured from a can with a date code o can't figure out. The beer pours a deep reddish brown color with a thin, fizzy head.

The spices and pecans comes through on the smell. There is also some nice sweetness with caramel and vanilla.

The taste is very thin without a lot of the flavor I expected from the smell. It's slightly sweet and has a raisin flavor on the back end. There's also something slightly metallic that fades as it warms.

The mouthfeel is very thin and highly carbonated.

Overall the smell is your best part. There is not much to the taste on this beer.

12 ounce can, no dating on it that I was able to find. One of my friends recently was in Savannah and was nice enough to pick this up for me. Served in a can shaped pint glass, the beer pours a reddish/amber color with almost an inch light tan head. Head retention is good and there's a decent amount of lacing. Aroma is nice, the brew smells like nuts, vanilla, caramel, it's a nice praline-like aroma. Taste is similar to the aroma, but not quite as sweet in comparison. However, there's also a slight metallic taste which hurts the taste after a while. Mouthfeel/body is light/medium, it's a bit slick with moderate carbonation. I thought this was a decent enough brew. It was nice to try once, but I don't think it's something I could drink all the time.

Reviewed from notes. Poured from 12 oz. can into a Cigar City El Catador teku glass.

S: Vanilla, nicely toasted brown malts, some brown sugar and toffee. A nice sweetness without approaching cloying. It has a nice nuttiness to it, but one that I would have ascribed to a nutty brown ale rather than addition of pecans particularly. Nice aroma on this one.

T: It doesn’t really live up to the aroma here. A more thin, tinny flavor profile. Lightly toasted malts, less vanilla than on the nose, and no real nut flavor. There's still some brown sugar sweetness and biscuit malts. No "cardboard" or other stale flavors that often invade brown ales for me. But that’s about it for compliments. There’s a somewhat artificial vanilla towards the end that comes across as Yankee Candle – it isn’t huge but it does linger and pull at the sides of your mouth a little. A thin metallic taste pervades the entire swallow.

M: Body is very thin for a brown ale. There's some alcohol flavors, but they aren't dominant. Average carbonation sensation for the style.

O: I'm disappointed. It smelled quite nice, and I was rooting for another tasty canned option to have on the shelves. I’m hoping this first can that I cracked from the six pack just sucked – if so, I’ll update this review as indicated. But this can isn’t good. I don’t think it’s infected, but definitely seems off from what I expected and subpar. Though it did smell nice...if this is what they all taste like, I couldn’t recommend purchasing it.
UPDATE: On a second and third drink, it maybe came across as a little better, but not by much. I would guess a re-rating at closer to 3.25/5, but I can't imagine it would be much higher.

A: Reddish brown, large bubbles on side of glass, thin off white head that does not hang around, no lacing

T: Caramel up front then turns to a weird maybe stone fruit or raisin which leaves a weird aftertaste

O: When I saw this on a recent trip to Savannah I was pretty excited because my wife and I love the pralines down on River St but this beer was a major disappointment. The taste did not come close to the pralines I had in mind and the beer was way too thin. It just seemed the quality just was not there.

Poured from a 12 OZ can into a pint glass. The appearance is a clear honey brown with a small white head. The aroma is sweet malt. The flavor is a nice blend of toasted malt and some vanilla extract. A decent beer.

Something about this brew is simply amazing, making it greater than the sum of its parts. The final product is like a dessert, without being very sweet at all, and still absolutely exceptional in class. Like nothing I've ever tasted before

Poured from a 12 oz. can. Has a dark amber/chestnut color with a 1/2 inch head. Smell is of malts, light hints of vanilla. Taste is nutty, malty, a slightly medicinal flavor at the finish. Feels medium/light bodied in the mouth and overall, not bad, but I was expecting more.

Smell: Softly toasted, amberesque maltiness underneath a firm note of marshmallow goop with a chemically, faux vanilla bent to it. Hmm. Didn't see it going this route.

Taste: Toasted malts, then, not a taste of pralines, but instead vanilla-hinted marshmallows. Medium-plus sweetness. Perhaps a little underlying dusty nuttiness, though, not really reminiscent of pecans. Near nil hop character, bitterness. Drying and still with that odd unyielding marshmallow foam flavor on the finish with a little lingering astringency.

Overall: It's got an odd flavor that grows a bit burdensome midway through the pint.

Appearance - pours a dark copper brown. Smell - not really praline but caramel and maybe a little salt. Taste - follows the nose, really smooth and nice. Overall - not bad. Solid. I like it.