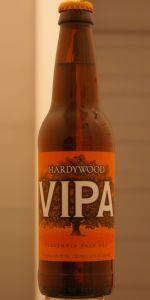 Odd IPA. Weak head that dissipates almost immediately. Hazy orange hue, and slightly malty on the nose, very slight hint of hops, mildly citrusy. Doesn’t really taste like an IPA. Where are the hops?? Mildly fruity..but for Hardywood I expect better. I’ll give this a miss going forward. Drinkable, but if you want an IPA...this one lacks hops that you would expect.

Deep golden color with a moderate white head. A little more malt presence than your typical IPA, and the hop bite is fairly toothless. A very mild ale--not hop forward. Not unpleasant either. Merely okay.

Pours a hazy medium golden color with moderate head.
Smell Is a pleasant citrus rind with a dash of malt.
Taste is moderate grapefruit with some floral notes.

Poured from a brown 12 oz. bottle. Has a dark golden color with a 1/2 inch head. Smell is skunky, like a lager from a green bottle, hints of citrus. Taste is malty, citrus, very mild bitterness for the style. Feels medium bodied in the mouth and overall is decent, but lacking any punch.

Amber color, pleasant smell. Tasted too hoppy for me, despite 30 IBU; strong aftertaste. Seems like an excellent example of an IPA. Great brewery.

L- Pale amber, slightly hazy, 5mm fine white head
S- Tropical fruits, lycheee is prominent for me, and citrus, perhaps mandarin orange. The smell suggests it might be a 'hop-bomb'.
T- Yep, it's pretty damned dry! The citrus, almost grapefruity, comes through in the taste, A few more sips and yes, definitely, grapefruit seems to be the prominent flavour.
F- It's not mouth-puckeringly citrus/dry, just extreeeemely thirst slaking. It's not so OTT hoppy as to be a hop-bomb nor undrinkable...
O- ... just I think I'd prefer this on a hot summer's day that a cold winter one. I couldn't drink more than one of these in a night.
Bought from Sainsbury's, London W10. 330ml bottle, BB 12/Jul/2019

Slightly juicy flavors of yellow grapefruit, melon, and general citrus. The bitterness is medium and nearing soapy, and out of balance with the body and intensity of flavor. The flavors are a little tinny.

As I mentioned, the body is thin.

It’s alright, it’s one of ten thousand IPAs out there these days. It’s a good IPA, but even Hardywood has better.

Poured from a bottle in to a tumbler resulting in a foamy head with a dark gold body. Citrus aromas of lemon zest and grapefruit oils. Taste is of yellow grapefruit. Mouthfeel is light and dry. Overall, VIPA is a straightforward but refreshing pale ale. I could easily drink two or three after yard work.

Minimal chill hazed light amber with a cream-colored blanket and some lace.

There are notes of cracker and orange that reminds me a bit of a light White Rajah, with a frothy but crisp medium body and a semi-dry finish.

A: This poured a clear gold with some white head.
S: It smelled like honey biscuit and light citrus hops.
T: It tasted like light pineapple and tangerine, with some honey biscuit. It had a clean and light aftertaste.
M: It was fairly thick with some carbonation. Decent body.
D: This was a nice beer with fairly simple and light scent and taste. The body was ok but the finish was really smooth so it was super easy to drink. Not earth shattering but still enjoyable.

One of the few Hardywoods on offer in southwest VA.

A: A very pale ale hazy gold with some good retention.

T: The bright floral hops predominate, as it warms, it gets more of a bubble gum type character. Malt thickening on the back end makes this well balanced.

Golden in color with a 2 finger white head and decent lacing. Just a little hazy.

Hop dominant in aroma with citric and grassy hops backed by the sweet doughy aroma of the malts.

Tastes of light grapefruit rind and orange with bready malt and a hint of caramel.

A great beer! Really well balanced in my opinion. Syrupy and smooth overall with great aroma and taste.

Medium body with a soft sting of carbonation on the tongue.

Pretty good and tasty IPA on the herbal side, subdued and with a nice aroma. Worth trying.

Poured from a 12oz bottle into a speiglau IPA glass.

Look is a very light amber with a little haze and a frothy big head.

Aroma is astrigent lemon with some underlying biscuit malt.

Taste is a malty light citrus herbal hops. The body is a little thin.


appearance is a pale yellow golden color, white head. just a bit of a whiff of earthy hops. taste is mild, not overly hoppy. thinner bodied.

Appearance: golden yellow in color with a two finger head.

Smell: very soft tropical fruit is all I can detect.

Taste: caramel, bread, orange, grapefruit, melon, and a bit of floral and some eathy tones. Bitterness is mild.

Mouthfeel: medium bodied. Crisp throughout with some dryness arriving at the end.

Notes via stream of consciousness: Beautiful white head. Massive. A bit fizzy/foamy but it'll settle to become more dense. Hazy yellow gold body. Seems to have very good head retention. Beautiful hoppy aroma as well including hop resins, flowers, hay, grapefruit, orange, and pine. Bright and clean, very nice! The head has dropped at this point but it still maintains a solid 1/8 to 1/4" of foam that covers the entire surface. Unfortunately the lacing isn't as good, leaving only small patches of laving behind. On to the flavor... bready and biscuity malt acts as a base for the hops which are unfortunately not nearly as bright as the aroma might suggests. The malt is quite nice though, there's a certain depth of character that you don't normally find. Some better lacing is left following a few sips. The hops are there but well enveloped in the malt, and the main components I find are floral and piney. The grapefruit and orange at this point seems more "generic", they could almost be described just as "tropical". There's some melon in there as well, and I also find some earthiness and leafiness. It's a little disappointing as the aroma was so great but moving forward it's got a solid bitterness that balances it and lingers in the dry finish. Pine lingers as well, and there's also some grassiness that I'm not finding in the aroma. Medium-light in body with a slightly less than standard carbonation level that leaves it smooth. The IBUs are listed at 30? That seems a little low. I was guessing 40 but I might be off. Overall a decent, smooth and drinkable IPA - wait a second, how strong is this? 5.2% ABV? Ahhhhh, another mislabeled beer. This is a pale ale with a good amount of hops to it. I guess they never said it was an India pale ale though, did they? That changes my impression quite a bit. As an American pale ale I think it's quite good, and very drinkable. If only I had another, damn.

L: Poured from a bottle to a pint glass. Had a pale yellow color and a slightly hazy consistency. There was a half inch of foamy head that lasted an average amount of time. Average lacing.

S: A decent, if a little overly subtle, aroma of hops, citrus, and a bit of malt.

T: Tasted of a fair amount of citrus (orange and grapefruit, in particular), a fair shot of hops, light malt notes, a light bready quality, and a floral quality. For the most part, this is a solid flavor, with a well-balanced character. It's not overbearing and is certainly tasty.

F: A good amount of carbonation with a slightly slick finish. Light-bodied.

O: While there's nothing overly special about this IPA, it's definitely easy to like. Drinkable.

This will be another of my entries for New Odds & Sods Sunday (Week 633). I recently completed a massive horizontal of New Belgium beers & now I am drinking & reviewing (mostly) single-o beers from The Bottle Backlog here at Chez Woody. My efforts are really beginning to pay off in that I am seeing movement & floor space + my guilt is beginning to abate.

From the bottle: "Brew with purpose"; "The embodiment of Virginia hospitality, Hardywood VIPA offers alluring tropical aromatics, a refreshingly delicate body and a bright, juicy finish. Heirloom Virginia barley rounds out the malt bill and creates a perfect sense of balance with a dose of citrusy Virginia hops. VIPA is our take on a Virginia India Pale Ale. or as we like to call it, Virgindia Pale Ale."; "Pair with roast chicken, pork, grilled fish, citrus salad"; "Pour into your favorite glass. Savor at 45 (deg.) F."

I Pop!ped the cap & began a gentle pour, in keeping with my New Year's Resolution and my Lenten denial. Aggro pours from bottles are now (mostly) a thing of the past. Once it was sufficiently decanted, I gave it a vigorous in-glass swirl to raise just under three fingers of foamy, rocky, bone-white head with moderate retention, leaving modest lacing in its wake. Color was solidly Amber (SRM = > 7, < 9) with NE-quality clarity. Nose had a fruitiness that I was having trouble identifying along with a bready maltiness and my mouth was beginning to water as a result. Mouthfeel was medium. The taste, while hoppy, was kind of reserved. It was not a Session IPA, but it had fooled me with its aromatic hops. The taste was more citrusy than tropical, although I was getting some of both. It was not bad, but it lacked a definitive taste that would allow me to better quantify it. It was as though it could not make up its mind as to whether to be a tropical IPA or a citrus IPA and it suffered from its dichotomy. Finish was dry, but it was just not what I was looking for from an AIPA. I would have guessed it as an APA if I had been left on my own, blind. YMMV.

It pours very light (much lighter than most IPAs) ad with a nice pillow-like head. The smell is tropical, floral and pine-like. The taste reflects the nose and it's bitter upfront and somewhat astringent and tart in the finish. Fairly light body.

Clear, normal looking IPA. Head performed as well as it could have, given the somewhat puzzling glassware choice. Dunno, maybe they know better than I. Minimal lacing rounds out the aesthetic experience. Hard to capture much in the nose, again, glassware. What does come across is a bit floral and maybe a bit in the Noble hop range. Taste explains more, as it's really floral. As the wild flowers fade off, it leaves something faint in the melon family, maybe just the most faint hint of cantalope. Finishes dry and bitter on the tongue while maintaining a solid body throughout. Overall, quite decent.