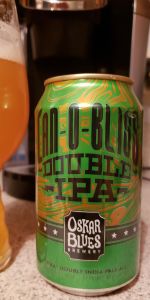 Notes: This DIPA is chock full of Citra hops and delivers a one-two punch of hop aroma and blissful flavors of passionfruit and citrus, balanced with a substantial malt backbone.
View: Beers | Place Reviews
Reviews: 14 | Ratings: 36 | Log in to view all ratings and sort

T: dank; in the background, there's herbal with pineapple; mild bitterness on the finish;

O: nice; a touch sweet for me;

A: The beer is rather hazy yellow in color and has some hues of amber. It poured with a finger high frothy white head that quickly settled down, leaving a thin layer of bubbles covering the surface and a narrow collar around the edge of the glass.
S: Moderate aromas of passionfruit are present in the nose along with notes of lime.
T: The taste has flavors of passionfruit along with stronger notes of lime and underlying hints of caramel malts. There is a light to moderate amount of bitterness.
M: It feels nearly medium-bodied and very juicy on the palate with a moderate amount of carbonation.
O: This beer is a lot easier to drink compared to other Imperial IPAs and does a good job at hiding any traces of alcohol from the taste and not being really heavy at all in body.

Pours a hazy, deep golden amber coloration with a medium, fluffy head. Smells quite lovely of biscuity malt and vibrant tropical and citrus hops, with notes of mango, passion fruit and grapefruit. Taste follows the nose, with a great balance of biscuity malt and tropical/citrus hops, with notes of tangy mango and passion fruit and zesty grapefruit and orange. Finishes with a light acidity and medium bitterness, as well as some tropical/citrus notes lingering in the aftertaste. Smooth mouthfeel with a medium body and carbonation.

A very nice DIPA with some quite tangy tropical and zesty citrus notes, which leave a certain, mildly acidic taste in the finish, with the tropical notes actually standing out a little more to me. That's the interesting thing about Citra, which can actually take on quite noticeable tropical notes despite its moniker. With its hazy look, juicy tropical/citrus notes and nice mouthfeel, this almost feels like a NEIPA to me.

This is my first in the series but this is a brewer I trust almost without question. Rocky head that fades. Plenty of citrus and especially grapefruit in the nose. This has a medium body and doesn't blast the alcohol at all; I was surprised to find this was eight two. Not amazing but very drinkable, if a bit forgetable.

A: Pours a lightly hazy golden yellow color with 2 fingers of head that fades down to a thin cap

S: Citrus and tropical fruit up front along with some lighter floral notes

T: Follows the nose. Starts off with a mix of citrus, tropical, and floral hops with low bitterness. Picks up some light maltiness. Finishes with lingering citrus notes

O: A solid DIPA that has a good focus on the citra. Very easy to drink, almost seems like a single. Check it out

Pours a very murky, almost opaque brownish yellow with about one finger of head that dissipated quickly leaving just a slight amount of lacing.

Smells of citrus-oranges and grapefruit with what seems like a very faint berry or sugary candy-very strange. I swear it faintly smells of bubble gum.

Tastes of bitter citrus with maybe a bit of alcohol. Kind of one dimensional in the taste department. Disappointing.

Mouthfeel is a little sharp with almost an alcohol burn in the aftertaste. Pretty well carbonated.

Overall, disappointing. I've generally liked the beers in the Can-O-Bliss series but this one is a definite miss.

Poured from a can into a pint glass
Appearance – The beer pours a hazy golden-orange, sort of orange juice like, color with a one finger head of white foam. The head fades super fast leaving almost no lace on the sides of the glass.
Smell – The aroma of the brew is very heavy of a orange and tangerine smell along with some smells of a grapefruit hop. There is also a good deal of some tropical fruit smells of pineapple and mango as well as a rather decent showing of a herbal hop. Along with a little bit of yeast the overall aroma is rather nice and inviting.
Taste – The taste begins with a fruit flavor of tangerine and orange as well a lots of tropical fruits of papaya mixed with some bready tastes as well. At the same time there some herbal and grapefruit hop flavors upfront as well as a touch of yeast. As the taste moves forward the sweet tropical fruit and citrus get stronger all while the herbal and grapefruit hop fade a bit. At the same time some light boozy tastes as well as a little bit of grass and hay come to the tongue, leaving one with a somewhat fruity sweet, and mixed dank/citrus hopped taste to linger on the tongue.
Mouthfeel – The body of the brew is thick and chewy with a carbonation level that is rather low. For the sweet, diverse mixed hop taste of the brew, the feel is great, and mimics well a boozed up OJ like beermosa flavor.
Overall – A rather thick and tasty hazy IPA with a lot of sweet fruit and a nice hop blend. Overall rather nice.

More like can o piss. This literally smells like cat piss, which I think is due to the citra. However, this and Mama's little yella piss are the only two beers I've had that can give me a full blown hangover after only one beer. I don't know what Oskar is putting in these beers, but it does not agree with me.

This is an amazing beer. Was a little too buzzed and drank it too quickly to analyze it so I will have to come back for this one, but wanted to definitely put it in the books as tasty.

Can dated 1/8/20 into pint glass. Pours a slightly hazy amber with a coarse white head. Decent lacing. Initial impression is an absolute deluge of citrus: grapefruit, orange, tangerine, and pineapple predominate, although there is a healthy dose of caramel to even things out. Mouthfeel is medium-thick; carbonation is perfect. Finish is somewhat sweet, but not objectionably so. I prefer this to the original Can-O-Bliss, perhaps because of the higher ABV but I like to give my palate more credit than that. Would revisit in a heartbeat.

Today's forecast: Extra hazy. Unfiltered and chocked full of Citra hops, Oskar Blues' Can-o-Bliss series takes a step in an extra strong direction with all the extra flavor and body for extra measure.

Firmly hazy with a matte goldrod appearance, Can-o-Bliss Double IPA comes with the same a creamy off white froth to appease the eye while a tease of citrus fruit, tropical and candied stone fruit for an herbal citronella presence. A rich maltiness of honey and shortcak come with a rounded smoothness of pastry to brace against the flavor of hops to come.

But the story is about the Citra hops as they burst with tangerine impressions and overtake the patient malts for a candied citrus taste of branch ripe oranges with lemon, red grapefruit, mango and apricot. A show of pineapple and gooseberry bring a tropical set of complexities with a late palate fueled by a smooth bitterness of chive, hemp and tea.

Medium full in body, the Imperial IPA trends malty-dry and moderate in bitterness. A refreshing and highly drinkable taste of fruit punch comes with a spike of botanical gin, fresh spruce and gentle spicy resins for a final taste of grassy citrus peels in a medium long bitter aftertaste.

12oz can. Poured out a slightly hazy, golden orange color with a small, off-white head of foam. It smelled of citrus, hay, toasted caramel and pine. Sweet tropical fruit taste with a lot of orange taste. Plus, caramel and a sharp bitterness