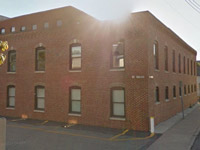 Personally, I love this place. The vibe is super chill and comfortable. It's an industrial feel for sure. The quality of beers, food, and everything all around is great too. Can't go wrong whatever you choose. The service has always beet good too, though like with any busy bar sometimes it takes a while for a drink which is especially so on packed comedy nights. They have a great selection of beers. I believe there were 12 beers on tap last night. A good mix of IPAs, a sour, brown ale, stout, porter, ales, lager, they have it all! No complaints here, keep kicking ass!

Although very hard to find in the industrial section of Somerville, this is a microbrew worth seeking out. There were over 14 inhouse brews available (all ales, except the Haus lager). This means there are plenty of specials outside of their house brews.

While there is a regular bar with many tables along the windows, one definitely gets the sense that one is in a brewery. (You'll walk by stainless steel brewery equipment to get to the bathroom.).

I ordered the cheddar cheese soup which was fantastic. Looking at the other three other patrons, their food also looked quite good.

The server, while new, was very attentive and helpful.

First time visiting. Small taproom, a few TV's. Kinda no-frills, but cool. Beers were really good. The IPA flight was really solid. Food-wise, everything that came out looked awesome. The chef really pays attention to detail. Staff was attentive and friendly.
I'm not gonna lie, not sure what I expected on my visit here. But I was pleasantly surprised. Will happily visit again. If I lived close this would be my spot. Cheers!

Usually they have a ton of their beers on draft. Long L shaped bar. In-house food options from soft pretzels to Nachos. Service is always friendly, but depending on how busy it is, it could be slow with flight pours.

Very good spot in Boston. Smallish but a ton of fun

I love the authentic Somerville beer-lovers atmosphere in this very local establishment. I love that the beer vats are just around the running club's wall of fame, potentiating that community feel. Not to mention, the beer! My favorite is the Flagraiser, but of course I'm partial to an IPA, however Slumbrew is constantly coming up with new and unique concoctions. The food is really delicious, not at all you standard pub dish. I've also noted that they have hosted some fun events with outside vendors, such as Plant Nite. One of my favorite local brewing companies!

Always really enjoy my time at the Boyton Yards location. I was really impressed the last time I went in to see 14 different beers on draft plus a couple of new blended projects they are playing around with. Food is always tasty with a good variety of things to choose from. We like to go early when the vibe is more chill, but it gets hopping later at night if you prefer that. Staff is super friendly and nice and went out of their way to make sure everything was just right.

Keep in mind, this is a working brewery and not just a bar/restaurant so sometimes you see brewers running around doing brewing stuff. A must visit if you're in the Somerville area.

I’ve been to a lot of taprooms and breweries, and Slumbrew’s American Fresh Brewery and Tap Room is one of my favorites. I’ve been three times and what I like about it is that, each time it’s been a different experience:

The first time I visited was mid-afternoon for a pint and a snack—there were several other patrons there, but the atmosphere was pretty low-key with soft music in the background and staff that paid just the right amount of attention (I never felt like I was waiting for something and the bartender was super friendly, but they also let me read my book in peace without being too conversational)

The second time I visited was on a weekday evening with a couple of friends. It was more crowded and the noise level was higher, but I was surprised to see all of the families (with children) in close proximity to the usual young professional after-work crowd (both the family crowd and the young professionals were taking advantage of the board games available for partrons!).

The most recent trip was for Slumbrew’s “Lobstah Killah” launch a few weeks ago. We got there around 9pm and the place was hoppin’—great (albeit loud) music, fun lighting, lots fun people and a great vibe (and the Cartoon Network on all the TVs!).

FOOD: Like their beergarden, the menu leads off with some fantastic charcuterie. The selection of cheeses always gets me, especially when paired with their house-made jam and mustard. Adding on to their charcuterie menu is what amounts to a full restaurant menu. I’ve had the mac and cheese and it was fantastic. Another friend had pulled pork (I think the sandwich?) and also described it as delicious. Also of note is that Slumbrew caters to the vegan and gluten free crowd.

BEER: I don’t need to say much about this, except that you can get an incredible range of Slumbrew beer here, including their new {GF} Yourself gluten-free beer. I’m pretty conservative when it comes to what I like, so I generally go for Flagraiser or Trekker Trippel, but they always have a variety of styles (and ABVs) to check out.

LOCATION: It’s right in Boston, enough said. It’s uncommon get this kind of experience at a brewery—big beer list and a full, delicious menu—without having to go to outside of 95. The one drawback is that parking isn’t fantastic (at least in their parking lot), but if you’re going for a night out you probably don’t want to drive anyways. Do yourself a favor and just split an Uber or Lyft)

OVERALL: It’s definitely a destination (sadly I live in Atlanta now), but if you live locally (#jealousy!) it’s one of the best hangs in the city!

Stopped into Boynton Yards recently and as always had a great hour+ visit... My partner and I love randomly stopping in and checking out the special beers on draft .. really enjoyed Gose the Destroyer and Porter for Procrastinators... There are so many beers you can only get here and as much as I like Assembly Row, i like sitting at a bar and the more established feel of the actual brewery setting.. I always see people I havent seen in awhile and its a great place to stop on a saturday afternoon for a snack and a couple of beers! Biggest complaint is that the menu changes seasonally (which is great) but i get hooked on certain things.. there was a spicy pizza over the winter that was unbelievable! I hope it comes back next winter but theres always something good. There are very few breweries in the boston area where you can actually always get food and drinks. This plus all of the special brewery only beers makes this a definite must check out!

Slumbrew at Boynton Yards is an incredibly special place. While it may not be as distinctly family-friendly as the Assembly Row location, the lack of children makes for a slightly less crazy experience.

Yummy beers, extraordinarily yummy food (seriously, the salads are really, really fresh), and great beer make for a fun time. And then there is the beer. If you're looking for a beer that can convince you that gluten isn't necessary in order to make a beer great, check out [GF] Yourself. You'll thank me later.

Also tried their barbacoa tacos which were delicious and a nice mixture of flavors that went well with the beer.

Atmosphere is quirky but relaxed and parking was very convenient.

Slumbrew's brewery space is tucked behind the Target in Union Square in Somerville. It's a hidden gem with a unique food menu ( Tator Tots what what) They focus on their core brand of beers, a solid group that shows a great range. They really shine with their seasonal though. My personal favorite might be Porter for Paradise, their Porter made with coconut. During the Winter you can get their evolving barrel aged series, yankee Swap. (I've had the first two, a Barleywine and an imperial stout. The third (a quad) is sitting in my cellar currently.)

The space itself is unique. There are tables lining around the outside of the bar in an L shape. There isn't a ton of space to hang out like they have in Assembly. It's still cozy and I tend to prefer the atmosphere of Boynton to Assembly. The food has never left me wanting and Slumbrew continues to provide an experience that I enjoy. If I'm in and around Union I usually stop by for a pint.

This is hands down my favorite brewery! The staff is really knowledgeable and enthusiastic about the beers, and they always have a great selection to appeal to any craft beer enthusiast! The food is surprisingly good as well so I've definitely popped in to watch a Patriots game on one of their many TVs or just after a road race for the fun music and great vibe.

I've been to Slumbrew 4-5 times and every time I think how much I wish it were closer and went more often. Really cool place with a nice menu of food and of course their great beers.

I've been there both when it's packed and when it's quiet and there is always great service and really helpful people working. Their Flagraiser IPA and their Tripel Trekker are great beers, they have a bunch more recently added that I look forward to trying.
They seem to have lots of different events from trivia, dog treat making, music, and more.

Somerville Brewing (Slumbrew) is a great place to hang with friends and enjoy some quality beers. Open for just over a year (though brewing for much longer), the taproom offers tours, an extensive menu, and a varying beer board. They have experimental drafts available at the brewery only, which makes it a draw to go and visit! I've happily killed a few hours there early evening enjoying some of my favorites "trekker tripel" and "Island day IPA". The bar can get crowded around tour time, but once the crowd is out on tour it relaxes yet again.

Hipsters on both sides of the bar (it's Somerville after all), which automatically makes it not a real happy place. Service was courteous and friendly enough, though.

Only 5 beers on tap. Strange, I thought there would've been more going to the source itself.....

Beers I had were in good shape, though pricey for what they were. IIRC most beers $7+ for 13-oz or less pours.

Glad I visited but probably won't return. Their taproom in Assembly Sq has a more fun vibe and the same beer, so I'd rather go there instead if I was hankering for some Slumbrew beer.

Love this place! Near impossible to find but worth the effort! Tried four different beers, all of which are top quality, however the black IPA (naked hopularity) to me was the differentiator.,.outstanding!

Great food and great service, my new "go to" place,

Cool up and coming brewery.