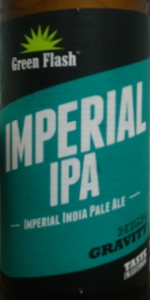 Notes: None
View: More Beers | Place Reviews
Recent ratings and reviews. | Log in to view more ratings + sorting options.
4 by RiceOwls27 from Texas on May 04, 2020

22 oz bottle split two ways.
Pours a slightly hazy orange coppery colour with finger of off white head.
Aroma is fruity - ripe pineapple, mango, over ripe orange, pleasantly piney and just a touch of dankness.
The palate is struck with the sweetness of mango, pineapple, citrus, but quickly flooded with pine notes - striking hoppiness - resinous and building bitterness, but not out of balance at any point.
Medium to full mouthfeel - not strikingly alcoholic but a touch of boozy warmth remains - along with the lingering piney bitterness.

L: Poured from a bottle to a tulip glass. Had an amber-yellow color and a hazy consistency. There was a quarter inch of foamy, fairly long-lasting head. Very good lacing.

T: Tasted of some citrus notes (lemon, in particular), a slight grassy quality (this is less evident as you go along), pine resin, lots of hops, tropical fruit (mango), and light malt. The sweetness of the fruit and the bitterness of the hops are definitely well-balanced. Quite tasty, even with the grassy quality.

F: A well-carbonated beer with a slightly slick finish. Medium-bodied.

O: On the whole, this is a well-made DIPA. Easy to drink and likable.

Deep clear yellow, decent white head, but not much retention.

The bitterness is sour, sweet, and biting. There are fruit flavors of lemon, green mango, peach, and then the stars of pine and weed. The dank flavors wrap around bitterness that covers the tongue like a blanket.

Green Flash has done a lovely job of balancing high alcohol content, a big malt bill, and most importantly big bitterness. This is a true Imperial IPA. It's got a great aroma, huge bitterness, lots of alcohol, and a ton of flavor.

An evenly cloudy and almost metallic semi-clear apricot-toned amber. Even creamy-tan head of good retention, with splotchy but connected lacing. Very subdued aroma, but interesting nonetheless, with a slight citric tartness and some almost cured-meat notes, like I’ve detected in a handful of ciders and white wines. Palate is quite grassy for an IIPA, but still there are resin, citrus, pine, pepper, mustard seed, and mild perfume notes as well. Caramel and alcohol if anything else. Medium-bodied, with fine and fairly active carbonation, approaching effervescence. A little warmth, especially in nostrils and on back of tongue.

I picked up 4 bombers of this Imperial IPA yesterday from Smart N Final in Dana Point, CA -- excellent price at just over $5/bomber if you buy in quantity -- buy at least 4 bombers if you want the additional, special discount over the stated price per bomber. "Best By" date is July 28, 2017. ABV is 9.0%. Green Flash brews this with lots of Summit and Nugget hops -- it's a great hop combo.

This imperial IPA pours a clear amber with excellent carbonation. 2 fingers of ecru foam. Nice lacing. As you near the bottom, sometimes the pour becomes increasingly cloudy with lots of tasty, clear sediment chunks. I like the chunks; not all the bombers have them.

The smell is tropical fruits (pineapple) and evergreen. Very nice! The taste starts with tropical fruits, evergreen and pine resin, followed by a moderate hop bitterness that lingers on the palate. A moderate malt backbone holds the assembly together. The alcohol is well-hidden; nevertheless, at 9.0% ABV, be prepared for a pleasant buzz.

I'd like to compare this Imperial IPA with Green Flash's "West Coast IPA." Both are DIPAs and often sold side-by-side. However, each has a completely unique hop profile. Green Flash's West Coast IPA uses Simcoe, Columbus, Cascade, Centennial and Citra hops. It pours a darker amber color, 8.1% ABV, and most importantly, it's an insanely bitter and delicious brew -- the Holy Grail of West Coast IPAs.

In contrast, Green Flash's Imperial IPA pours a lighter amber and delivers a juicier, far less bitter hop taste. It's 9.0% ABV. It's really delicious -- even if you're a hophead extremist like me.

In short, it's like comparing a West Coast DIPA to an East Coast DIPA -- it depends on your taste. If forced to choose, I'll take Green Flash's West Coast IPA over its Imperial IPA -- but it'd be a damn close. Whenever I take a break from extremely hopped brews, this Imperial IPA fits the ticket. Fortunately, Imperial IPA is now readily available. Try Smart N Final if you have any problem.

Clear, golden amber with a thin, bubbly head. Aroma is tropical fruit, pineapple and mango, along with bread malt and pine. Some alcohol vapor present as well. Flavor follows suit with a big hops bite - grapefruit and pine. Bold, resinous and juicy. A very good DIPA.

Poured into a snifter. A moderately hazy dark amber-orange color with a frothy white head. Nice staying power. Earthy, piney and resin on the nose with plenty of orange and pineapple. Also prominent, slightly sweet caramel - just enough. The taste is as billed - a big West Coast IPA with assertive bitterness and all the flavors from the nose. A big malt presence that was slightly sweet but not overbearing. Warm on the finish appropriate for it's size.

Savory hints of evergreen and pine, with the hoppiness perfectly balanced against pineapple sweetness and grapefruit bitterness. This beer is a master stroke and is a lot bigger than it tastes, so don't let it deceive you!

This one pours a hazy orange with a beautiful head; the smell is light, but has some pleasant scents of hops and fruit. The taste is stronger than the scent, with a solid base layer of hops. This beer sits easy.

Poured from a bomber bottle into a globe glass.

S - Strong aromas of tropical fruit-like and earthy hops. This is balanced by bready malt and a whiff of alcohol.

T - Bready malt flavors hit first, followed by a punch of hops bitterness that brings flavors of mango and citrus. Off-dry finish. Some metallic flavors were present on first our, but they faded as it breathed.

From bottle (pint), pours a Amber colour with a good white head that disapates to a layer that hangs around til the sip.
Aroma pineapple, pine, grapefruit, sweet.
Taste just like the nose, ABV very well hidden. Crushable.
And thank you America for supplying this to an island called Tasmania closest to Antarctica.

Love this Imperial IPA. From the deep amber color, exceedingly hoppy scent, and the full bodied taste, this is another winner from Green Flash. ABV is the limiting factor from consuming a vast amount, good to sip as would a fine bourbon. Bottled from The Matchbox, MDW.

A nice and pleasant Imperial IPA. Not the best but certainly not the worst. The balance could be improved and tweaked a little but it's not bad by any means.