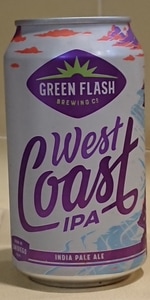 Notes: As craft beer pioneers, we embarked on an expedition to brew the benchmark West Coast IPA. We ventured into the unknown and struck gold, discovering a tantalizing menagerie of hops. Simcoe for tropical and grapefruit zest, Columbus for hop pungency, Centennial for pine notes, Citra for citrus zest and Cascade for floral aroma are layered throughout the brewing process. West Coast IPA® exemplifies the Green Flash spirit of adventure and discovery.

4.17/5  rDev -1.2%
look: 4.25 | smell: 4 | taste: 4.25 | feel: 4 | overall: 4.25
Look: Ruby-red and nearly clear with a bountiful off-white head that settles to a lid, leaving good lacing behind
Aroma: Grapefruit – both white and ruby-red, pine sap and needles, a little Cannabis, wafts of berries, and some sweet onion
Taste: Pine hits hard up front and develops as citrus and some berry notes follow closely behind and weave in nicely. Fruity and lightly skunky Cannabis notes appear as the pine/citrus subsides and onion stays in the background throughout. Closes with a bite along with more pine and grapefruit
Mouthfeel: Full, lightly slick, medium-high carbonation, and moderate dryness on the finish
Overall: This is delicious stuff. This beer got me into Simcoe hops 15 years ago and I used to drink it all the time until it ceased being bottled and distributed in the state. Glad to see it still gets tapped now and then and was a nice surprise birthday gift from my boss

4.02/5  rDev -4.7%
look: 3.5 | smell: 4 | taste: 4.25 | feel: 3.5 | overall: 4
Only photos could describe the foamy white mess that rises above the top of a clear glass liter mug. It’s that pathetic. Really, no beer pour, especially an IPA should ever have this much stark white starchy foam pretending to be a head. This is the consequence of trying to fit two twelve ounce cans' contents into the vessel. With patience, the foam recedes and there becomes almost a true beer head. Obviously, there are concerns, as big white foamy and starchy heads often lead to taste and mouthfeel disappointments. The aroma is of OK piney hoppiness; but, so far, it's looks over aroma and looks have a big negative lead. The color isn't the problem. It's a rich and bright dark amber that's close to being translucent. Actually, it's a pretty good looking brew once the head recedes. Much as expected, this is a nicely West Coast hopped rendition, without much of a malt inclusion to carry it via its body, nor to give it a counterbalance so necessary for a great IPA. The ratings here may be inconsistent, but that sums up the brew. There's good color, but bad lacing. There's a nice sharp piney hop bite, but no malt balance, nor backbone. This isn't bad and the tastes of those that want hoppiness, even at the expense of a malty presence, will like this. To taste, it's a nicely dry hopped ale. To anyone that loves a traditional IPA, the lack of barley malt in the mix will spoil this.
Apr 25, 2022

Pours a translucent brownish orange with about a half finger of with head (gentle pour). Ok retention and lacing.

Smells of fresh cut grass and pint. Also got a hint of marijuana.

Piney, resiny, bitter taste. 95 IBUs in their glory-Right in the wheelhouse for a WCIPA. Some malts in there as well-bit of caramel.

This is a WCIPA. Hit the mark squarely. And stinking enjoyable too.

Reviewed by highdesertdrinker from Arizona

Reviewed by Dan2213 from Pennsylvania

Reviewed by TheBrewsClues from California

Rated by ThePold from Virginia

Apr 05, 2021
Rated: 4 by TwilightBeerCareer from Illinois

4.21/5  rDev -0.2%
look: 3.75 | smell: 4.5 | taste: 4.25 | feel: 4 | overall: 4
355 ml bottle, Cardinal Pub & Bar, Stavanger. ABV is 7.3%. Orange to amber colour, moderate head, slightly off-white. Lovely and intense aroma of citrussy American hops, hits you as soon as the bottle is opened. Also notes of tropical fruits and pine. Some sweetish malts in the background. The flavour is neither too sweet nor too dry, and is a veritable hoppy explosion from start to finish. Grapefruit, bitter orange marmalade, pine needles, resin. A classic!
Mar 19, 2021
Rated: 4 by GreenBayBA from Wisconsin

Reviewed by biiru_ojisan from Japan

Smells like sweet biscuit maltiness with pine and tangerine.

Sweet biscuity malt on the palate, finishing with a nice drying pine bitterness and a hint of grapefruit.

Mouthfeel is medium bodied with moderate carbonation. Alcohol warmth is present, but blends in.

Overall, a solid, textbook example of the style. It will scratch the itch if WCIPA is the itch that you have.