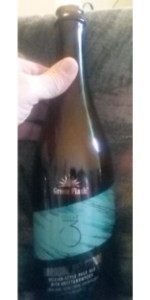 seems weird, how prevalent green flash was, and how now they are basically gone, its a shame, ive always loved their beer, and this bottle was the last from my cellar, at least three or four years old now, a brett pale with belgian yeast and a very heavy bottle referment, sexy stuff, well matured now, the best of these belgique ones i reckon, but the only one i have had anywhere near this old. its basically orval to me, same color, same absurd brett conditioned liveliness, same funk, same malt but dry finish, curiously woody and earthy, sexy and super well evolved. its a little tricky to pour, like actually kind of impossible, insanely effervescent and fizzy after the cork explodes out of the thing, i can barely get it to be anything but foam in the glass, but more a product of age than anything i suspect. huge airy just off white head sits an inch above the rim and several inches above the liquid, which has some haze, a soft muted amber color, and just a little sediment towards the bottom. it smells and tastes like orval, funk and astringency under unique but not overly estery belgian yeasts, musty and dank and damp and ancient, fully grainy, tons of dusty wood, weird cheesy character, and red apple to me, its heavy but so bubbly and dry that its light at the same time, and while its maybe a minute past its prime, it sure is obviously high quality. its tragic these beers are going or have gone away, this is an underappreciated part of what green flash does or did, and i will miss it. i felt bad drinking my last bottle of their stuff, but also im glad i did, this is ripe and ready now, pour as slow as you can and savor!

Poured from 750ml bottle into glass. No found bottling date.
Slightly cloudy, pale gold colored body. Cork released with mighty back pressure but no foam overflow. Takes many short pours to get a full glass, because of the head building. Of course this leaves behind bubbles of lacing.
Aroma is mostly yeast, grassy, horse blanket, and slight green apple.
Taste is more abrupt than the aroma. Flavors of sweet pear, green apple, freshly cut hay, leather, and horse blanket. There is a prickliness on the tongue after each sip.
Medium mouth feel, with lots of fizziness/carbonation. Dry finish.
A strongly funked beer, that is difficult to drink because of all the head created with each small pour.

750ml bottle poured into a chalice. Bottle is just about a year old. Cork practically launched itself out, and there was no gush. Nice bottle fermentation.

T: Base malt flavors of bread, toast and crust. Oily and herbal hops show that there is a generous addition at play here. Bretty funk, and heavy phenols bring almost smokey and rubbery hints in small doses. As dry as dry gets. Funky finish with lingering hop oils.

M: Medium bodied with a decent malt heft, though it's all lifted scrubbed away. Huge blast of aggressive, scrubbing carbonation feels like it's power washing your mouth. There's been some nice bottle conditioning going on.

O: Damn, damn good. A pretty straightforward brew, but the fermentation is absolutely nailed. So crushable. I'd love to have this around more often.

With a lot of experience with dry hopped, wild fermented beer, the brewers at Green Flash go beyond the stalwart Belgian rustic pale ale and embrace the funk with their newest, more high end Baroque Belgique. The new namesake comes with new complexities, new charms and new brightness.

Hazy amber and yeasaty, the beer pours like winter's honey in color but with a billowing froth that eclipses the rim. Nearly gushing at times, the dry and dusty ale soon captures the senses with a strong perfume of floral arrangements, tropical fruit and a mature farmhouse must. Its taste is steely with caramels, biscuit and bread crust while that peppery tinge of the nose teases the early palate as well.

Those nutty, crusty and cola sweetnesses lift quickly from the tongue and usher in a high fruit and spice middle palate. Peppercorn, cumin and clove brace against pineapple, apricot and plum until a spicy and bitter finish rounds the session with cinnamon, stone fruit, curaçao orange, vanilla, clove and papaya. A bitter close comes in the form of pink grapefruit, spruce and jupiter

Medium, drying and highly drinkable, the pleasantly rife ale carries a ton of yeasty complexes that are sure to lure the after palate and sooth the senses with weathered woods, curing leather and an overall earthen fruit fare.

Not as much rocket cork as other suggest but I will be dammed if this is not the most carbonated beer I have had in a while pour producing well over a half glass of foam slow pour makes for a very whipped top performance. Smell is slight sour and very funky with some good Belgium yeast body. Taste simply put is just basic some fruity yeast and funk with just the minimal amount of brett. In fact the carbonation is really out of control on this one tried to hit from the bottle and I was left with a full mouth of foam! Only to be enjoyed slowly. Body not bad light and drink able.

Overall I have seen some gushers but never one I get a full foam assault on. Skip thus one since I am sure if cellar-ed would explode no JOKE!

750 ml bottle, the cork rockets out just before you finish removing the cage. Lost some in the sink but not too much. Constant oozing. . Hazy orange gold, Brett/horse blanket dominates the smell. White pepper adds some to the equation. Tremendous Brett taste, like few if any others that I have tried. , bitter Brett not sour Brett. Continuous oozing from the bottle. Taste wise, think of Oval on steroids. Medium bodied with the carbonation not quite as brisk as all that oozing and the cork experience would suggest but it IS zesty. I think it was under $9 and I think I will chance it again. Streuth, what a corker!

L - Cloudy copper, with about 6 fingers of head that boils out of the glass! I think this one was still in fermentation stage - maybe I opened too early?

O - This one was clearly opened too early, or shipped too early - one or the other. Brett has not finished doing it's thing. Tasty nonetheless

Poured a cloudy dark orange body with massive head (had on tap). The aroma had touch of tartness to it but mostly some yeast and funk come through. Smooth bodied beer that has this sour fruit vibe (to me) along with funkiness that is pleasant and it finishes easy and with even a touch of sweetness.

Tasty beer, but watch out when you're opening it. My cork shot into the ceiling and them foam gushed out. Classic brettanomyces aroma, but not too deep in the horse blanket. On the tongue, there's a spicy, peppery finish, bready malt backbone, and herbal fruit. Tasty beer.

This is a new beer from the Green Flash Cellar 3 Series that must be about 8 weeks since bottling, meaning it's rather fresh for a Belgian-style, Brettanomyces-refermented pale ale. The label says this was conditioned for 4-6 weeks after bottling, so I'm assuming this bottle is actually about 2 months old, all things considered. I know this has a decent amount of Brett in it, and Green Flash used to make a beer called Rayon Vert which was essentially an Orval clone with some West Coast influence in the hop bill, so my mind may skip to that unintentionally throughout this review.

Pours a ridiculously overzealous deep copper/amber with a ludicrously-huge off-white foamy head that stacks up to 3-4 inches, eventually dying down to a finger or two of off-white foam that laces intensely as it sinks. Essentially, this looks as a Belgian pale ale refermented with Brett should look. It reminds me a lot of how Rayon Vert looked when it was around, so points for that even though it seems like they may just be bringing RV back in a shittier format and charging more money for it.

Nose is funky Belgian farmhouse yeast, green apple, hay, honey, lightly-tanned leather, damp earth and bright citrus. Yeah, this pretty much smells like Rayon Vert. So far, they have yet to bamboozle me with this one. Kind of clever, though, I'll give 'em that. Damp earth and light floral notes fill the nostrils upon another deep inhalation, bringing out some rye-like spice and horse blanket Brett characteristics.

Flavor oscillates heavily between fresh'n'funky Belgian pale ale featuring lots of doughy, malty, spicy and earthy flavors and a more rustic strain that delves a bit deeper into the palate, with some notes of guava and anise, playing along with the hefty malt and mildly hoppy flavors that derive more from the yeast (and aging/conditioning period) than anything else. Carbonic acid can be a bit biting here, lending more of its trademark "bite" to the feel than is probably necessary, making this a bit less smooth than I figured it'd be.

Finish is creamy and well-rounded, but even with some time left to open up, the carbonation on this bottle is intense and eruptive. Definitely reminiscent of Rayon Vert with some slight changes and a format distinction, Not sure how I feel about that, overall, but this is still a solid beer that deserves praise. It also bears a fairly-solid price point. Great stuff. Wish it weren't only available as a 750 mL C&C bottle, but it is what it is.

Baroque Belgique from Green Flash Brewing Co.
Beer rating: 84 out of 100 with 21 ratings