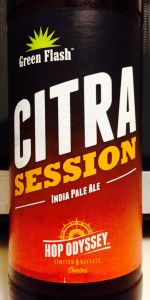 Poured a slightly darker SRM than your average session ipa. This was full on the color of a copper penny. 1/3" off white head. Aroma was Citra, but back in 2014, it wasn't the #1 acreage hop, so I think they were a little more conservative with its usage back then. Its there, but its not that massive blast that you get proportion wise these days.

Taste hits the Citra notes, again lighter, but its a lighter beer, but just because you have a lighter body (although here again, heavier than average). Plenty of orange, orange blossom, tangerine, canteloupe like notes. Carbonation seemed lower than I like in said style, but not by much. I think the best way to improve this beer would be to lighten up the malt bill, I don't want balance, I want a light bodied, highly hopped session ipa.

If Green Flash doesn't go completely under, I'd like to check out a 12oz of this again and see how it stacks up.

S: Citrus and melon, tropical fruits and a bit dank. Some resin and vegetal as well, with a very light cracker malt. Not a huge aroma, but the hops are the star for sure.

T: Melon, tropical fruits. Citrus – oranges and limes – and dank, with some grapefruit rind. Very light cracker malts add just a touch of sweetness with a slightly husky flavor. The grassy hop bitterness lasts into the hang, but it’s not particularly bitter.

M: A light body, with a good level of carbonation and a low alcohol presence.

O: I didn’t enjoy this as much as I had hoped. This isn't exactly Zombie Dust…
Still, not offensive and a nice IPA that has decent flavors and drinkability.

3.65/5  rDev -7.4%
look: 3.5 | smell: 3.5 | taste: 3.75 | feel: 3.5 | overall: 3.75
This was poured into a pint glass. The appearance was a nice looking hazy to semi-transparent transparent golden color with a slim finger’s worth of white foaminess that quickly dissipated barely leaving any lacing. The smell started off with a sharp citrus somewhat bitter with an underlying sweet to bitter pine to blend. The taste was moderately bitter with an underscore of bitter piney-ness. There’s a lingering bitter piney aftertaste leading into a slight dry sweet citrus finish. Different, but nice. On the palate, this one sat about a light on the body with a fairly decent sessionability about it. Carbonation runs fairly light allowing a nice harsh bitterness to pound my tongue. Overall, I say this was a pretty good session IPA that I would have again.
Jun 27, 2017

S - Big citra hop nose, with mango and resin, a bit of wild grassiness, a bit of dank cat-pee.

T - Sharp hop flavors, slapping you around with resin, some tropical fruit coupling nicely with sweet malts, with a moderately bitter close.

M - Brisk carbonation does not completely scrub the resin build.

O - An interesting brew, this drinks like a full IPA, but manages a 5% ABV. Tasty, bright citra, but like a lot of pure citra brews, though vibrant, the result is not particularly balanced. Add to this the bottle format, and this does not ultimately feel as sessionable as its name would suggest.

Reviewed by eskildow from Ohio

S - "Citra" forward with tangerine, grapefruit and tropical fruit. Only a bit of bread, mostly tangy, juicy and bright.

T - Follows the smell but more going on. Backdrop of biscuit body balances the hops which roll from ripe citrus and tropical fruit into a forest of leaf, pine, hooch and herb. As good as Boat!

F - Fine, smooth with pithy bitterness and a minerally, drying finish that cleanses the mouth.