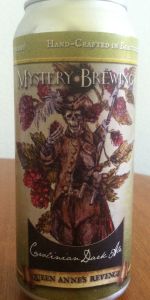 From the CAN: "This beer is ALIVE! Keep it cold; drink it fresh!; "Hand-Crafted in Beautiful Hillsborough, NC"; "Be Nice to Our Planet Recycle This CAN"; "Spring Hoppy"; "beer for drinking".

A nice loud Crack! suggested that I CANduct an inverted Glug to celebrate, but it being "ALIVE!", I decided to be gentle instead. An in-glass swirl raised a finger of fizzy deep-tan/light-brown head with low retention. Color was Very Dark Brown to Black/Opaque (SRM = > 34, < 44), but probably closer to 39/40 and with ruby highlights. Nose had a pine hops mintiness, but it was being overwhelmed by the dark chocolate/smokiness of the black malt. Mouthfeel was full, not quite creamy, but close. The taste was an unexpectedly good combination of minty hops and black chocolate malts to create a Girl Scout Thin MInt taste. The finish was cool, clean, dry and very minty. I was left thinking of a Peppermint Patty! Normally, I hate beers in this style, but this was perfect! The malt complemented the hops, rather than obscuring them. I would still rather drink an AIPA, a DIPA or a Belgian/White IPA instead, but this was pretty good.

Rated by HopsForBrains from North Carolina

3.69/5  rDev +4.5%
look: 3.75 | smell: 3.5 | taste: 3.75 | feel: 3.75 | overall: 3.75
Poured on tap and served in a shaker pint, the beer is a dark, chestnut brown color, with a tall, foamy, fluffy, tan colored head. Aromas of roasted toffee and caramel, subtle bitterness, and creamy highlights. Flavors are bitter and roasted forward, with a molasses ans dark vanilla undertone, and a heavy tobacco characteristic that imparts pepper spices to the point of warming. Wow, not expecting that. Smooth, light bodied, with a coffee and chocolate bittersweet aftertaste. The finish is smooth, light, and slightly dry.
Jul 05, 2014
Rated: 3.25 by greencovesteve from North Carolina

Reviewed by VncentLIFE from North Carolina

Smell was lacking the hops I was promised. Malt kind of smells slick, but underwhelming presence.

Taste as a leafy tobacco feeling, light and delicate. Maybe some hop bitterness, but its all so light that I cant really find it.

I preferred the Gentleman's Preference.