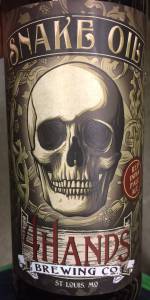 Notes: Snake Oil is a Red IPA brewed with a combination of American and Australian hops. It has a bright, complex aroma with notes of citrus, peach, and tropical fruit. A variety of caramel malts lend this beer a full-body and a big mouthfeel.
View: Beers | Place Reviews
Reviews: 19 | Ratings: 144 | Log in to view all ratings and sort

Welcome back to New 4th Hands of July Beer Sunday (Week 697)! I have been awaiting this entry for a couple of weeks. I have finally gotten to the point of looking at my backlog that serious action is being done. I have been running through a LOT of beer by dint of reviews/ratings/check-ins, but there is nothing quite as satisfying as a brewery horizontal (same brewery, lots of different beers).

My local bar manager, Joe, was telling me that he has screwed up his index finger by Crack!ing open CANs for use in their Slushee machine & while I was sympathetic, I thought "Amateur!" Man, I have SO many ways of Crack!ing open CANs that do not involve my digits that it is not funny! I have a repurposed slug taken from the end of some rebar in PR in 1993; a GI opener with a special tapered end; a quarter, just about anything but my fingers. I mention all of this as a way of killing time since I got some initial foaming due to it being a brimful craft CAN with nowhere for the tongue to go. Once things died down, I went with a slow, gentle Glug into the awaiting glass. Unbidden, it formed just under two fingers of dense, foamy, rocky, tawny head that quickly wilted in the face of today's heat & humidity, but leaving behind nice lacing in its wake. Color was a gorgeous Deep-Amber/Light-Copper to Copper (SRM = > 13, < 17) with NE-quality clarity. Nose smelled of pine resin and caramel malt, more like a hoppy American Amber Ale than an AIPA. Hmm. Mouthfeel was medium-to-full, not quite creamy, but big for an AIPA. Taste was like licking George Brett's bat during the 1980 World Series! Holy Pine Tar, Batman! This was definitely an AIPA. In fact, it was the kind that I prefer - PNW hops with no sign of the Southern Hemisphere in sight. It really was like licking a pine tree, though. There was a (thankfully) light caramel malt presence, but it was mostly just cool and minty, very clean and dry. Man, I CANnot get enough of these types of AIPAs! I would have guessed Chinook, but their website seems to indicate otherwise. Hmm. No matter. Finish was cool, dry, minty and just the way that I prefer my AIPAs - in spec with the style!

Darker amber color with a moderate haze. Decent and lasting head. The lace is a blend of spots and streaks.

The taste starts like an English IPA with a good dose of the caramel malt at the base. This quickly dissipates to the stronger than expected hop kick. The hop profile is also reminiscent of the British version. Full bodied with a modest carbonation level. There's a bit of alcohol warmth in the finish. The soft, balanced aftertaste fades quickly for an IPA.

Poured into a 16 oz Troegs Snulip glass best before 3/11/18. Pours a very attractive Amber with a 2 finger sticky off white head that leaves plenty of bubbly lace.

Overall this is a solid brew, not crazy hoppy or bitter, but a nice old school drinking IPA. Thanks jzeilinger for this one.

A - Pours a deep copper orange color with a thick frothy white head. Foam is very, very sticky on the sides of the glass.

O - The resin in this beer builds gradually. Glad to have tried it.

Copper and mostly filtered with a little slow rising carbonation, and topped with 3 fingers of slightly beige head.

Bitter grapefruit pith, hints of caramel, catnip and skunk cabbage, onion and garlic, all come in. It feels light compared to say Lagunitas Sucks, but tastes somewhat similar in profile.

Got this in Albany, NY, drinking in Massachusetts tonight. Really good brew. Slightly light for what I was anticipating, but really nice flavour profile.

Pours amber with one finger head. The aroma is pine and a citrusy note, mostly grapefruit.
The flavor is a bit toasty with sweet biscuity malts with pineyness and some tropical fruit on the finish.
Overall it's good, but I won't be seeking it out again.

16oz can. No apparent code dating. Appearance: Tea colored, light golden brown. Hazy, with a low lying off white head. Aroma: Fruity hop aroma is strong, more towards a tropical mango but has some underlying citrus. Has a typical caramel malt and hop resin note found in traditional American IPAs. Taste: Juicy caramel maltiness, with a fruity hop mango touch. Bitterness slowly builds to a strong crescendo on the swallow, with a traditional pine resin character. Mouthfeel: Medium to heavy bodied for the style, with carbonation on the lower side. Finish: Leaves a tropical fruit layer bitterness after the swallow, with some retronasal burnt caramel. Overall: Solid but not spectacular take on a red IPA. Delivers a nice "new school" tropical fruit aroma, but from there forward it’s a pretty stereotypical American IPA with a strong caramel and hop resin character. Low carbonation and relatively heavy body make this a sloooow drinker

Smell has notes of pine, sap, some mild citrus and a bit of grass with a biscuit malt coming through on the nose.

Taste is very piney with a nice balancing citrus flavor. Strong biscuit and caramel malt backbone keep the beer very balanced. There is nothing unique or exciting about this beer, but its so well done and just a great example of a traditional IPA. Finishes with a nice lingering piney bitterness.

Feel is a bit on the thick side for the beer. Medium carbonation. Smooth almost oily.

Pours a little hazy amber. Would say 17 on the SRM scale. Nice slightly tan head that leaves lacing but not too quickly.

Notes of rye and citrus on the nose.

Starts with initial notes of earthy and piney hops, followed by a strong bready malt presence with a touch of sweetness. Not much of bitterness to speak of but not without. Not complex but a very clean and great drinking beer.

Dark amber with a finger of head. Heavy lacing is left down the glass. Smells terrific with juicy hops that give it notes of citrus and tropical fruit. But unfortunately the flavor does not follow. Too sweet with caramel malt which seems to be the case with a lot of IPAs that come from this region. Just not to my tastes.

A - nice copper amber color with a white head that sticks and leaves a nice lacing
S - piney, earthy hops. Bready malts.
T - piney, earthy hops. Undefined bitterness. Bready malts.
M - medium mouthfeel. Alc covered. Aftertaste is bitterness, earthy.
O - some of the previous reviews would have you think this was an up and coming new ipa. This is an ipa, but it doesn't impress by any means. TIPA still rains supreme for the STL area.

Pours a murky black cherry with a finger of khaki colored head. Head retention is solid, although thin to begin with. Lacing is left speckled about the glass after each sip. Aroma is hoppy, with sticky, fresh notes of resin, pine, and tropical. Flavor profile is hoppy, but a little less controlling. Notes of tropical and pine hops stick to the palette with plenty of resin notes as well. Mouth feel is a happy medium between thick and full, and thin. Overall, it's an enjoyable IPA with good hop qualities in both the aroma and taste. The look could be a bit better.

Hazy, golden-copper in color with a white head. The aroma is piney, earthy, peppery...a little ripe fruit underneath. The taste is slightly dry, with a flavorful underlying malt flavor. Moderate bitterness from the mid-taste through the finish. Full in body. Nice.

My old neighbor from Oswego gave me a can of this. It poured a hazy amber with white head that is leaving a spotty lace. The scent had faint citrus hop lean. The taste had passion fruit base with some bitter hop flare. The mouthfeel is medium in body with good carbonation. Overall it is a solid beer.

T: Follows the nose, some toasty notes, dryness up front. Pineyness, toastyness & dryness as this warms, a touch of pineapple as well. Finishes dry, toasty, with a little bit of caramel, plus woody & piney hops, juicy

16oz can. Poured a clear, bright amber color with a small, off-white head of foam. It smelled of pineapple, orange, peach and toasted caramel. Nice tropical flavor with malty caramel and sharp bitterness.

Reddish amber hue with a fingernail of khaki colored foam covering the majority of the top. Excellent clarity. Fantastic aroma of a blend of citrus smelling and tropical smelling hops is prevalent. The flavor is pungent tropical hops with notes of papaya,pineapple,and cantaloupe. The mouth is slightly chewy and sticky.