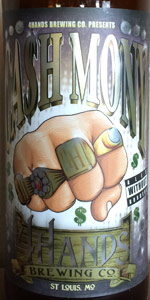 Notes: CA$H MONY is an Imperial IPA brewed with a wasteful amount of the very best hops we could secure. An ample malt bill is paired with a huge dose of pungent hop flavor. Citrus dominates the aroma, accentuated by notes of melon, pine, and tropical fruit.
View: More Beers | Place Reviews
Recent ratings and reviews. | Log in to view more ratings + sorting options.
4.27 by BrewSTL from Missouri on Dec 30, 2020

12 oz can pours hazy glowing amber-orange color with a thick creamy off-white head that leaves a nice lace in my glass. Sharp aroma of grapefruit and pine, resinous sticky pine and grapefruit flavors , has a full thick, sticky and slightly syrupy mouthfeel that finishes with a lingering bitterness.

Golden body with lively carbonation; sticky, frothy head. A nice tropical fruit aroma; a little citrus, a little pineapple. A bold menagerie of pine and orange flavors; bitter with a sticky sweetness; caramel malt and simmering booziness. Heavy body; a bit rough and prickly on the palate; dry and sticky.

A nice imperial IPA, bold and brash in many ways yet having some subtleties with flavor pop-ups. Balanced with hop bitterness and malt sweetness and a good, tempered boozy note simmering underneath.

Picked-up a four-pack of cans at Kappy's in Norwell for about fourteen dollars. Had never tried or heard of this brewery before. This is a miss for me. Mediocre taste, canned-on date unclear.

Here I sit, watching the prairie fireflies out of my hotel window, wondering why I brought this 12 oz. can (an extra from someone, thanks!) with me here to the middle of nowhere. No canning date. For shame.

Ca$h Mony would make my top 50 list of all time dumb beer names; thankfully, the liquid does not follow suit. We like hops, & this has them in spades. Lovely bolt of bitterness up front, tossed with resinous pine & orange jam. The sweet caramel/malt is too heavy-handed & cock-blocks the malts. Bready & thick, this disappears way too fast.

Had too much mediocrity from this brewery; this breaks that mold. Good, solid beer.

This one's dank in a bad way, with sticky, catty caramel and some tingly pine resin.

The smooth medium to light body has a bouncing tight carbonation that leads into a finish that is neither dry nor wet, but just right in the middle.

Poured into a glass from the 12 oz can, no date to be found as usual for 4 Hands. Comes out a nice golden color, lets some shadows come through. A big ol white head comes up and dies off at a steady pace, tons of lacing is still left behind in the glass. Nose is almost nothing but hops, with a flurry of citrus and pine that is just slightly followed by some malt sweetness and almost bready notes. Taste follows suit and man does this drink smooth. No heavy bitterness and no hint of the booziness except in the very back after it was already gone. Quite tasty, will buy more.

Welcome back to New 4th Hands of July Beer Sunday (Week 697)! I have been awaiting this entry for a couple of weeks. I have finally gotten to the point of looking at my backlog that serious action is being done. I have been running through a LOT of beer by dint of reviews/ratings/check-ins, but there is nothing quite as satisfying as a brewery horizontal (same brewery, lots of different beers).

From the CAN: "Pairings[:] Sharp Cheddar[,] Charcuterie".

Man, I totes dig these food pairings! I was poised to attend the Culinary Institute of America (C.I.A.) outta high school, but between circumstances, finances & blown chances, I enlisted inna Navy, instead. No regrets & my recruiter did me a solid by steering me away from being a cook since, as he put it, some of those stew burners are so brain dead, they actually have to occasionally be reminded to breathe! It was true & I would have probably ended up swallowing a bullet. As it was, I eventually landed in Supply as a Storekeeper (SK), doing repair parts supply as opposed to retail sales (although I did some of that, also). Some of my fave moments were as a Mess Crank & being able to stand in when the cooks (MSs) were short-handed. My gig is & has been baking, but of late, I have been relegated to slow cooker duty.

Onward! It is still hot as the jungle around here & I need a beer. It beCAN with a Crack! of the vent, followed by a slow, gentle Glug since I do not feel like dealing with a potential mess. Once deCANted, an in-glass swirl lifted both my spirits & just under two fingers of dense, foamy, rocky, tawny head with decent retention that left nice lacing as it waved bye-bye. Did I mention the heat & humidity? F**k! Color was on the cusp of Gold or Amber, so I asked The Gelt Gang of Mammon, Midas & Croesus for their opinion, but they were so spent from today's P/K World Cup FT games that they fanned me on. OK. That laves it at solid Amber (SRM = > 7, < 9) with NE-quality clarity. Nose was a pungent mélange of CANteloupe, honeydew, peach, pine, the tropical suspects of mango, passion fruit, papaya and guava plus a honey-like maltiness and some fiery alcohol that went up my nose & lit my sinuses up. 8=O I need this! Phew! Mouthfeel was medium, but I expect more in & from a DIPA. The taste was like a liquored-up fruit cup! Ha! I am doing a gig as a day-to-day substitute teacher & sometimes, I will get leftover fruit cups in goody bags or as leftovers. This was like a vodka-infused fruit cup! Just a fruity medley with a big alcohol burn! Yeah, I've been drinking all day, but this was a revelation! Damn, but this was good. How CAN I parse out all of the sweet, fruity flavors for you? Let's start with the ones from the Nose & add white grapes, pear, peach, apricot & maybe a maraschino cherry. ;=) Forgive me on the last one. Do you like fruit salad? Do you like alkeehaul? If you said "YES!" to both, then you will did this little number the most. Finish was hot & dry, but still fruity. Phew! Getcha some & meet me inna alley, cat! It'll make you purr like a kitten. Meow!

this is totally over the top, but its awesome. a highly fragrant and oily resinous monster of an ipa, one of the better hoppy beers i have had from these guys really. denser than many but not new school hazy in appearance, with an orange honey color to it and not much head from the can after it has a moment to settle. the nose is straight tropical fruit, pineapple and tangerine and mango, even a little sweet in its oiliness before it goes a bit vegetal and bitter, but super fresh and attractive. some light grain sweetness here, its not too much and it provides nice balance and a little body, for how bold the hops are here, they arent out of proportion for what this is. huge guava and pine resin here, almost sticky as i drink it, and a definite honey note, floral and fresh, springy and for how robust it is, its not that heavy. fresh and complete spectrum on the hops, nicely bitter at the end, and just a really great recipe, on the edge of absurdly hopped, but they have built a good enough beer around all the hops that they work. 4 hands has been on a serious roll lately, and this one is next level!

A: A dark orange coloring with a feverish pitch of carbonation with has a 3 finger pearl white head sitting atop with a smooth and creamy texture. Long lasting visual, stratified lace band runs down the vessel with an intricate design and near full coverage.

S: Fresh grapefruit juice on the nose, wet and inviting with a smooth nature. Citrusy lemon with some sweet pineapple juice rounds out.

O: A decent ipa, tastes like a hybrid of some west coast hops and fruity east coast conan yeastiness. Strong rate of drink-ability, nice level of hoppiness and flavor vs bitterness is well balanced. Good first impression, kept my attention throughout the course of the drink with a nice range of flavors. cash, mony hops.

The melon aroma really speaks here make sure to look for it and you won’t be dissatisfied! The alcohol content is high and warms your throat on the way down. What a great ipa!

Pours a foggy orange with a finger of off-white head. NIce retention, but only a few dots of lacing left behind. Aroma is hop-strong, with notes of citrus, spicy and grassy. Malt notes are sweet, biscuit, and nutty. Aroma is dripping with flavor. Flavor profile is citrus, and spicy hops, and biscuit and sweet malts. Very well balanced, with little bitterness. Very flavorful and enjoyable. Mouth feel is medium-thick, with a smooth, filling feel. Overall, it's a well balanced IPA. It's fresh, but still providing great notes. Extremely well balanced.